Steve Karnowski
MINNEAPOLIS
The Associated Press
Published May 28, 2021 Updated May 28, 2021
For Subscribers
Comments
Text Size
Please log in to listen to this story. Also available in French and Mandarin. Log In Create Free Account

June will be a critical month for Enbridge Energy’s Line 3 crude oil pipeline as the company resumes construction and opponents mobilize for large-scale protests and civil disobedience.

One prominent opponent, Winona LaDuke, founder of the Indigenous-based environmental group Honor the Earth, said she expects thousands of people from across the state and country to join the protests along the route in northern Minnesota.

Both sides are also waiting for a major ruling from the Minnesota Court of Appeals in June on a legal challenge by environmental and tribal groups that are seeking to overturn state regulators’ approval of the project. The opponents also hold out hope that Democratic Gov. Tim Walz and President Joe Biden will intervene.

“I expect that unless Walz stops the project over 1,000 people are going to get arrested,” LaDuke said.

Line 3 carries Canadian crude from Alberta. It clips a corner of North Dakota on its way across northern Minnesota to Enbridge’s terminal in Superior, Wisconsin. Enbridge says the 1960s-era pipeline is deteriorating and can run at only about half its original capacity. It says the new line, made from stronger steel, will better protect the environment while restoring its capacity and ensuring reliable deliveries to U.S. refineries.

The Canadian and Wisconsin replacement segments are already carrying oil. The Minnesota segment is about 60 per cent complete as a planned construction pause for the spring thaw ends June 1. Enbridge plans to finish the work and put the line into service in the fourth quarter, said Mike Fernandez, the Calgary-based company’s chief communications officer.

That adds to the urgency for opponents, who are organizing a “Treaty People Gathering” for June 5-8 and preparing for mass arrests. More than 250 “water protectors” already have been arrested since major construction began in December.

“We will gather in Northern Minnesota to put our bodies on the line, to stop construction and tell the world that the days of tar sands pipelines are over,” organizers say in appeal on their website. “Only a major, nonviolent uprising – including direct action – will propel this issue to the top of the nation’s consciousness and force Biden to act.”

Over 300 groups delivered a letter to the Biden administration on Thursday calling on the president to direct the Army Corps of Engineers to suspend or revoke Enbridge’s federal clean water permit for the project.

“Due to the urgency of the climate crisis and the fact that Indigenous leaders have not consented to the Line 3 project, large-scale non-violent civil disobedience is now being organized for early June along the Line 3 pipeline route,” they warned the president.

They urged Biden to follow the example he set on the first day of his administration, when he cancelled the disputed Keystone XL pipeline on climate-change grounds.

Biden has not taken a stand on Line 3, while Walz is letting the legal process play out. The Biden administration has declined to shut down the Dakota Access pipeline, which is owned by a different company and was the subject of major protests near the Standing Rock Reservation in the Dakotas in 2016 and 2017. In Michigan, Enbridge is defying an order by Democratic Gov. Gretchen Whitmer to shut down its Line 5 because of the potential for a spill in a channel linking two Great Lakes.

Enbridge, which updated the projected total cost in February to $7.3-billion (U.S.), has been touting the economic benefits of Line 3. Fernandez said employment on the project will shoot up to 4,000 as full-scale work resumes. More than half the workforce has been from Minnesota with most of the rest coming from neighboring states. Around 500 are Native Americans, many of whom were specifically trained for the project. He put the total local benefit at over $250-million.

The Minnesota Court of Appeals is expected to rule by June 21 on whether Enbridge adequately proved a long-term need for the project. The independent Public Utilities Commission approved the project, but the state Department of Commerce, two tribes and other opponents argue that the company’s demand projections failed to meet the legal requirements. Enbridge and the PUC say the projections complied.

The opponents aren’t disclosing many specifics about their plans for protests because law enforcement also is getting prepared, but they say they’re determined to step up the fight as the final construction push approaches.

“I expect there will be pretty strong resistance,” LaDuke said. “I really have no idea what it will look like.” 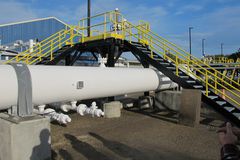 Explainer
Line 5 pipeline: What you need to know about the Enbridge route now at the centre of a U.S.-Canada legal dispute
Subscriber content
May 20, 2021 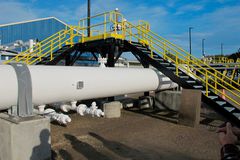