A major Alberta oil and gas company whose roots date nearly back to the establishment of Canada as a country is moving its head office to the United States and changing its name as the province’s energy sector struggles to retain investment.

The relocation means Encana Corp. will now be based south of the border. It comes after the departure of foreign oil and gas companies from Canada, with Royal Dutch Shell, ConocoPhillips and Devon Energy Corp. selling their Canadian assets or scaling back investments as a crunch in pipeline space crimps prices.

Encana’s move on Thursday compounded an already bitter political debate between Alberta and Ottawa. The Liberal Party was returned to government last week with a minority after an election in which anger over environmental policies, including a carbon tax, and pipeline delays left the Liberals with no seats in Alberta.

Premier Jason Kenney accused the government of Prime Minister Justin Trudeau of scaring away investment by limiting the industry’s ability to export its products.

“It’s not just about Encana," Mr. Kenney told The Globe and Mail on Thursday. "It’s about the broader decline of the Canadian energy industry, which I think is a deliberate policy of the Trudeau government.”

A spokeswoman for the federal minister of Natural Resources said Ottawa was “disappointed” by Encana’s decision.

“We will continue taking the necessary steps to ensure Canada and Alberta remain competitive, and that our energy sector remains a source of good, middle-class jobs,” Vanessa Adams said in a statement.

Encana’s chief executive officer, Doug Suttles, a former BP executive who is from Texas and became CEO in 2013, told a conference call on Thursday the decision would allow the company access to a much larger source of investment from U.S. index funds, which hold shares based on companies’ positions in various stock indices. Such investing has become common as instruments such as exchange traded funds have grown in popularity. Mr. Suttles rejected the notion that politics prompted the move.

Along with the change of head office, Encana – once among the country’s largest energy companies – plans to rebrand itself as Ovintiv Inc.

Encana had said last year after Mr. Suttles moved to Colorado, citing personal reasons, that it had no plans to leave Calgary.

Mr. Suttles said with its “long and proud history in Canada” Encana will continue to manage its Canadian assets from its Calgary office.

No job losses at the current head office or in the field are planned, vice-president Brendan McCracken said in an interview. The company did not say where the new head office will be.

“The underlying business is not changing as a result of this change in domicile," Mr. McCracken told The Globe. "There’s no change in staff, there’s no change to capital allocation, nobody’s moving from one office to another, there are no job losses that are coming out of this.

“We’ve built an extremely successful business in Canada. We’re going to continue to invest in that business.”

The price of Encana shares fell nearly seven per cent on the Toronto Stock Exchange on Thursday, and have fallen by 61 per cent in the past year.

In Alberta, the announcement added to fears within the industry that more companies will leave Canada. Canada’s oil patch is already hurting from five years of low crude prices and pipeline constraints, which resulted in capital investment in the sector dropping to $37-billion in 2019 from $81-billion in 2014. 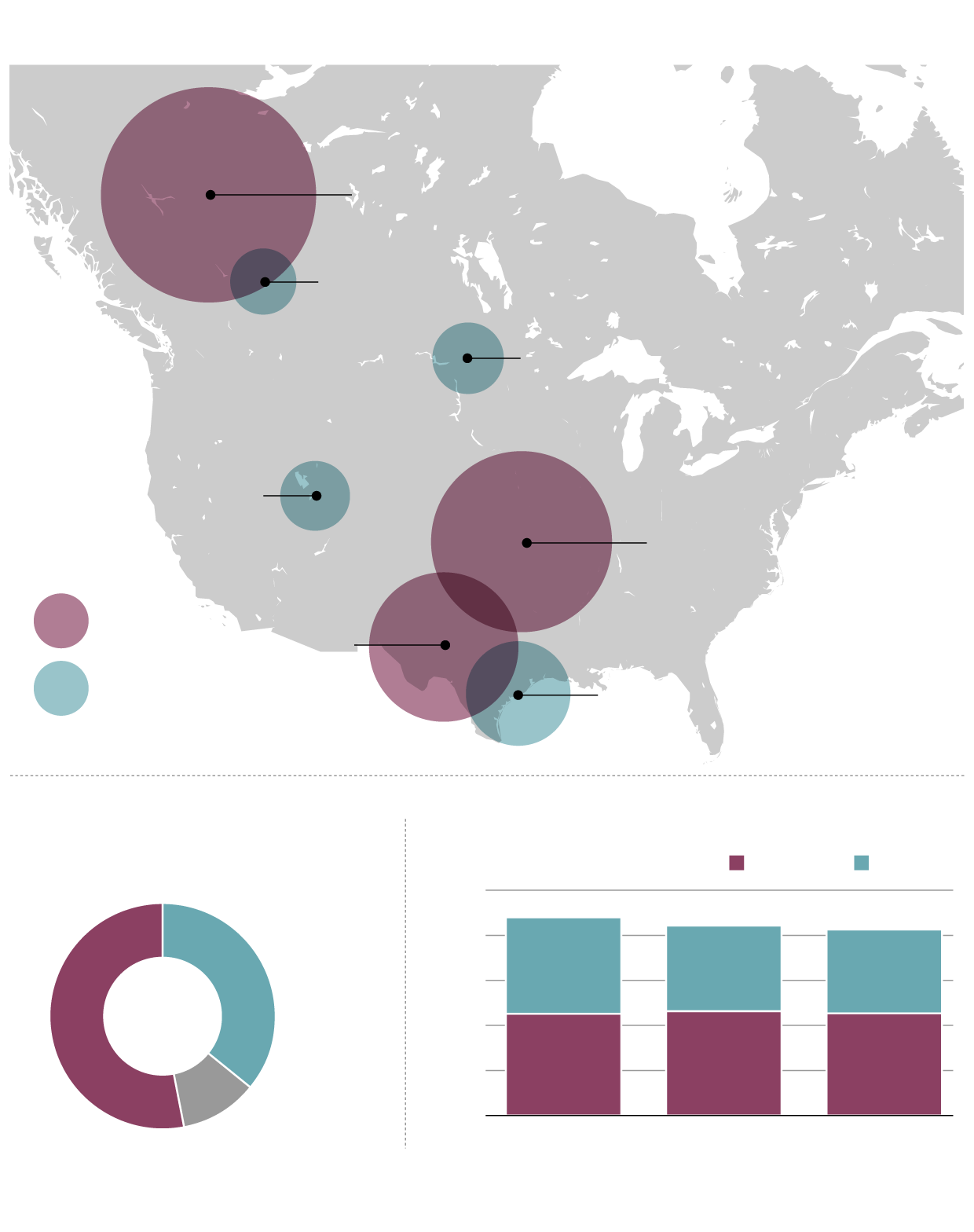 Encana has made several moves over the years to boost its presence in U.S. shale oil, including the US$5.5-billion acquisition of Newfield Exploration Co. one year ago, which added major operations in Oklahoma.

Encana has seen strong returns on its Canadian assets of late, but Mr. Suttles said the rebrand was driven by the market’s perception that the company is primarily a natural-gas enterprise, hurting its valuation.

“We’re proud of our company’s history, but we have meaningfully transformed our business … [and] it is important our transformation is recognized in our valuation,” he said.

Encana chief financial officer Corey Code said on Thursday that being domiciled in the United States will increase the company’s long-term value, particularly when it comes to index funds.

Gwyn Morgan, who led the merger of two of Canada’s largest oil and gas firms to create Encana in 2002, called the move “heart-wrenching.”

Mr. Morgan told The Globe he had an inkling of his former company’s intentions after Mr. Suttles moved to Denver in May, 2018.

“It made it pretty clear that the centre of the company was going south, so it’s not surprising, but it’s certainly disappointing in a personal sense,” Mr. Morgan said.

He blamed a downtrodden Canadian oil and gas investment and a federal government he believes is hostile to the sector.

“To see a company of that importance to Canada now exit its head office from the country, I think it’s a tough day for Canada,” Mr. Pourbaix said on Thursday. “We have to remain very, very focused on how competitive conditions are for our industries.”

(In 2009, Encana spun off most of its oil sands assets by creating Cenovus. Encana, under then-CEO Randy Eresman, zeroed in on natural gas.)

Encana’s roots reach back to the 1880s, when the federal government tapped Canadian Pacific Railway (CPR) to build a cross-country rail line. Legislators gave it 25 million acres of land, including some surface and mineral rights.

In 1883, CPR hit natural gas when it was drilling for water near Medicine Hat – launching the country’s multibillion-dollar energy industry.

By the time Alberta created the Alberta Energy Company in 1973, CPR was a sprawling conglomerate. It split in 2001, producing five companies, including PanCanadian Petroleum Ltd.

The company will trade on the Toronto and New York stock exchanges under the ticker symbol OVV. Mr. Code said more information will be included in the company’s application to regulators next week for approval of the change.

Encana’s reorganization will require a shareholders vote, slated for early 2020. It is also subject to a thumbs-up from courts and the stock exchange, but requires no specific government approval.

If the change gets the green light, shareholders will receive one share of common stock of the new company for every five shares of Encana.

The changes mean some Canadian index funds will have to drop the stock.

Separately, the company said net income for the third quarter rose to $149-million, or 11 cents a share, from $39-million, or 4 cents, a year earlier. Operating profit rose to $195-million from $163-million.

Encana’s total production rose 4 per cent on a pro forma basis to 605,100 barrels of oil equivalent (BOE) a day in the quarter, on higher output from both its core Anadarko and Permian basins.

Encana Corp., one of Canada's oldest and largest energy companies, is moving its corporate headquarters from Calgary to the United States to bolster its access to deep-pocketed investors. Alberta Energy Minister Sonya Savage blames federal energy policies for the move, while Alberta's opposition NDP says the province's plan to rescue the economy by slashing corporate income taxes has failed.