As the federal and Alberta governments race to rescue the Kinder Morgan pipeline project, the global financial community is sending new signals that Canada’s investment in the fossil-fuel economy comes with increasing climate-change risks.

The bank − which also targeted coal-fired power and Arctic oil and gas development − said a substantial portion of the world’s fossil-fuel reserves “must remain in the ground” to avert the most catastrophic impacts of climate change.

Its statement came just days after former New York mayor Michael Bloomberg suggested in Toronto that the high-level exposure of Canadian banks to the oil industry is “irrational” because of a lack of rigorous climate-risk analysis.

Mr. Bloomberg − billionaire founder of the media empire that bears his name − led a financial-industry task force that urged global companies to do a better job disclosing the risks that climate change poses to their businesses in order for investors to be able to make more informed decisions.

The warnings from the mainstream financial sector come at a delicate time for Alberta’s oil industry and the federal government, which hopes to give the industry a shot in the arm by getting the Trans Mountain pipeline project back on track.

Prime Minister Justin Trudeau and Alberta Premier Rachel Notley have pledged to provide financial support, if necessary, to complete the project in the face of implacable opposition in British Columbia. They argue that the lack of pipeline capacity is costing Alberta’s leading industry billions of dollars in revenue, which in turn reduces government’s ability to fund vital services.

The industry is experiencing steep discounts to its pricing as opponents not only threaten the Trans Mountain project but have thrown up roadblocks to TransCanada Corp.’s Keystone XL project in Nebraska and to Enbridge Inc.’s Line 3 expansion in Minnesota.

Coming after similar stands by France’s BNP Paribas and Dutch bank ING Group, the HSBC statement on Friday was widely seized on by opponents of Kinder Morgan’s project to bolster their argument that government support for long-life, fossil-fuel assets not only undermines Canada’s climate commitments but is poor economics.

In a filing for an initial public offering of Kinder Morgan Canada Ltd., the Houston-based parent company said court challenges, protests and political opposition could disrupt or delay the project and cause cost over-runs.

However, Kinder Morgan did not provide an analysis of longer-term risks to the pipeline’s economics arising from the global commitment to reduce greenhouse-gas emissions – the kind of risks cited by HSBC last week.

The bank said it supports the goals of the 2015 Paris climate agreement, in which 194 countries and the European Union agreed to pursue a rapid transition to a lower-emissions economy, with the goal of limiting the increase in average global temperatures to 2 C above preindustrial levels.

In an interview, HSBC Canada spokeswoman Sharon Wilks said the bank is responding to both the environmental imperative and the prospect that long-life fossil-fuel assets will be increasingly risky investments.

“I don’t think the two can be separated,” she said. Ms. Wilks hastened to assure its existing oil-industry customers that it remains committed to the sector overall, and will finance expansion of existing operations, so long as companies have a credible plan for dealing with greenhouse-gas emissions.

Suncor Energy Corp. has released a climate report that outlines different scenarios that could impact the company’s operations and financial results.

Its “base case” assumes oil demand will grow until at least 2040, and oil sands will remain an important part of the world’s energy mix.

It also lays out a scenario in which the world moves aggressively to limit the increase in average global temperatures to 2 C, a goal it says it supports. In that case, “new oil-sands prospects are challenged and unlikely to proceed,” the company says.

Still, the industry has bigger economic challenges than decisions of a few European banks, said Ben Brunnen, vice-president for oil sands for the Canadian Association of Petroleum Producers. A plunge in oil prices and eroding Canadian competitiveness has cost investment in the oil sands, which has seen capital expenditures drop to a projected $12-billion this year from $25-billion in 2015.

He said Canadian governments and global financial markets need to recognize that oil and gas demand is likely to grow until 2040 – even though that outlook would suggest a failure to limit the impact of climate change.

“I think what we need to be looking at is the growth profile from a realistic perspective,” he said. “What do we expect growth to look like and how do we want to respond to that?”

Opinion
To the oil workers of Alberta: We care about you
April 20, 2018 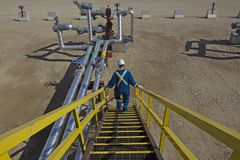 Investing in virtue is hard when few companies qualify
April 17, 2018