With its share price in free fall, AltaGas Ltd. is embarking on a turnaround plan that emphasizes financial stability – and starts with slashing the dividend.

Newly hired chief executive Randy Crawford took an axe to AltaGas’s dividend on Thursday, chopping it to 96 cents, from $2.19. Over five years, the measure is expected to save the company $1.3-billion.

To raise cash, AltaGas will also sell more assets next year. The company has already unloaded $2.4-billion worth of assets in the past two years, and on Thursday it announced the sale of its 55-per-cent stake in British Columbia hydro facilities for another $1.4-billion. Mr. Crawford wants to sell an additional $1.5-billion to $2-billion in 2019, bringing total proceeds to roughly $5.5-billion.

The flurry of activity follows AltaGas’ $6-billion acquisition of WGL Holdings, a deal that was announced in early 2017. WGL runs the gas utility in Washington as well as natural-gas gathering and processing assets in the Marcellus shale-gas region of the northeastern United States. AltaGas has struggled to win back investors who have lost faith and its shares have plummeted 52 per cent since the deal was announced.

Multiple factors have combined to pressure the stock, including: an extended regulatory review of the acquisition, the abrupt departure of former CEO David Harris in July and U.S. corporate tax changes that hindered the deal’s profit potential.

But the biggest problem has been the debt burden that came with an all-cash acquisition. Before the latest asset sale, AltaGas’ debt amounted to 6.2 times its earnings before interest, taxes depreciation and amortization (EBITDA) – a level that caught the attention of rating agencies.

“We have some work to do to strengthen our balance sheet and, ultimately, reset our financial position," Mr. Crawford said on a conference call Thursday. “This work is mission-critical."

AltaGas is one of a number of Canadian utility and pipeline companies that made major purchases in the United States in recent years, only to have debt worries overshadow the benefits of expanded operations and higher revenues.

Shares in Enbridge Inc., for example, fell in the aftermath of its $37-billion takeover of Spectra Energy Corp. in 2016, due partly to concerns over the resulting debt burden.

AltaGas, however, has not done as much as some companies to assure investors of its financial security. “Very tough decisions need to be made, requiring investors today to have faith that the company can successfully execute on a new strategy after a number of strategic missteps in recent years," Raymond James analyst Chris Cox wrote in October.

Summarizing these missteps, CIBC World Markets analyst Robert Catallier recently noted that, “in a nutshell, the company paid a cash price for the WGL acquisition, but funded it with asset sales 18 months later due to the lengthy regulatory process to close the transaction. In the interim, market conditions changed, and U.S. tax reform negatively impacted EBITDA by about 5 per cent.”

AltaGas also surprised investors this fall by announcing plans to spin off regulated utility and wind farm operations in British Columbia, Nova Scotia and Northwest Territories into a new company, AltaGas Canada Inc., through an initial public offering. The deal came as a shock to some analysts and investors, because the company had been expected to keep marketing assets to third-party buyers at decent prices, and the investment community questioned whether there would be ample demand, causing AltaGas’ shares to take a hit.

Ultimately the deal went through, but AltaGas only raised $239-million, less than initially anticipated. Underwriters subsequently exercised an overallotment option, increasing the proceeds to $275-million.

On its own, AltaGas’s debt is not completely debilitating. However, AltaGas needs to spend heavily on capital projects over the next few years.

Proceeds from the new round of asset sales, then, will be used for both debt repayment and capital spending.

The new plan is winning some praise. Mr. Cox had been critical of AltaGas in recent months, but the analyst wrote Thursday that investors should be encouraged by the tougher medicine.

“The combination of an accelerated de-leveraging plan and definable dividend policy that now appears sustainable should provide the market needed clarity around the ability of the company to drive per share growth” he wrote in a note to clients. 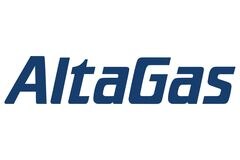