Inter Pipeline Ltd. is abandoning its friendly merger with Pembina Pipeline Corp. , but has chosen not to immediately support a rival hostile bid from Brookfield Infrastructure Partners LP , even though no other offers are on the table.

Inter Pipeline is now on the hook to pay Pembina a $350-million termination fee. The payment was negotiated when Pembina emerged as a white knight in late May to help block Brookfield’s bid.

Should shareholders support Brookfield’s bid, the infrastructure giant will ultimately be responsible for paying the fee.

Pembina’s shares jumped 4 per cent on Monday, closing at $41.03 each on the Toronto Stock Exchange, while Brookfield Infrastructure’s corporate shares lost 5 per cent to close at $83.29 each on the TSX.

Brookfield’s bid is set to expire on Aug. 6, and some analysts say Pembina could buy some Inter Pipeline assets from Brookfield to make the deal a more manageable size. Brookfield twice raised its takeover price, and also gave Inter Pipeline shareholders the option to take their payout in all cash.

Pembina was to pay for its friendly deal solely using its shares, and would not budge on the offer price agreed to in May.

In a note to clients on Monday, RBC Dominion Securities analyst Robert Kwan said he is monitoring whether “a transaction involving a split of the assets with Pembina might come together, whether that be as part of a revised Brookfield Infrastructure offer or following the close of a sale of Inter Pipeline to Brookfield.”

When Brookfield updated its offer in mid-July, the company disclosed it had previously sent a letter to Pembina’s chief executive officer indicating a willingness to acquire some “lower risk, lower return assets.” Meanwhile, in its merger circular, Pembina disclosed it originally approached Inter Pipeline about a smaller deal for “certain assets” after Brookfield launched the hostile bid.

In a statement on Monday, Inter Pipeline said it is “open to engaging with Brookfield in an effort to reach a mutually agreeable transaction in the best interests of shareholders,” while in a separate statement Brookfield said it expects Inter Pipeline’s special committee of board directors to recommend its current bid.

The battle for Inter Pipeline has been heated from the beginning. Brookfield started buying shares in Inter Pipeline in 2020 and privately approached the target’s board about a deal last fall, but was repeatedly rebuffed. Brookfield made a hostile bid worth $16.50 in February.

Many analysts believed Brookfield was likely to face little competition in its pursuit of Inter Pipeline, but Pembina emerged as a white knight in May, agreeing to an all-share deal worth $8.3-billion. Brookfield’s original hostile bid was worth $7.1-billion.

Brookfield and Pembina ended up taking each other to the Alberta Securities Commission (ASC).

Arguments were heard in early July, and the ASC raised the percentage of shares that must be tendered to Brookfield’s hostile takeover bid. Pembina had alleged Brookfield was using “coercive tactics” to win the takeover battle.

Before the ruling, Brookfield needed the support of a simple majority of Inter Pipeline’s independent shareholders, but it will now need the support of 55 per cent under a modified tender condition.

The ASC also shot down Brookfield’s request to have the potential $350-million break fee to Pembina scrapped. 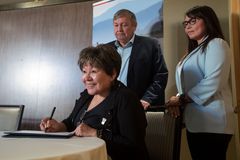 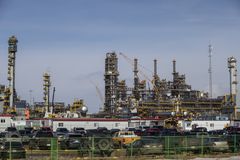 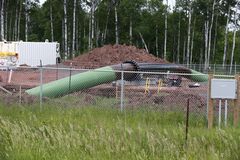