Michigan Gov. Gretchen Whitmer demanded Friday that Enbridge Energy provide proof that the damage to one of its dual oil pipelines under the Straits of Mackinac will not pose a threat to the area.

The Alberta, Canada-based company closed its Line 5 pipeline under the straits on Thursday after discovering that the anchor support had shifted from its original position, company spokesman Ryan Duffy said Friday in a statement.

Whitmer said the damage and how it occurred calls into question the viability of the pipeline.

“That’s why I am requesting Enbridge turn over to the State of Michigan all relevant information about this most recent damage and provide affirmative evidence that establishes the integrity of the pipeline,” Whitmer said in a statement.

Duffy clarified that the problem does not affect the pipeline, which he said was shut down as a precaution.

“We were transparent in notifying the State of Michigan and our federal regulator (Pipelines and Hazardous Materials Safety Administration) on Thursday, the same day we discovered the damage to the screw anchor support assembly,” Duffy said. “We will be providing the information the Governor has requested.”

According to Whitmer, the damaged anchor support lies approximately 150 feet (46 metres) from a section of the pipeline where damage to the pipeline coating was discovered on or around May 26. She said the company is gathering more information through divers, the use of a remotely operated vehicle and other means.

“As Governor of the Great Lakes State I carry an immense burden to protect this priceless treasure that defines the contours of our state and our way of life,” Whitmer wrote in her letter to Enbridge CEO Al Monaco. “I anticipate and expect your full co-operation.”

Reports on the problem with Pipeline 5 come after Enbridge reached an agreement with the U.S. Environmental Protection Agency to pay a $6.7 million fine for allegedly failing to quickly fix pipeline safety issues. The EPA determined that Enbridge neglected to properly evaluate thousands of “shallow dents” on its Lakehead Pipeline System, which runs across northern Minnesota and northwestern Wisconsin.

Enbridge signed a consent decree in 2017 with the U.S. Justice Department to resolve claims in 2010 from a massive oil spill in Michigan and another pipeline leak in Illinois. The company paid $177 million and pledged to improve pipeline safety under that agreement.

The 6th U.S. Circuit Court of Appeals earlier this month ruled Enbridge has legally acceptable plans for dealing with a potential spills from pipelines under the Straits of Mackinac. A strategy for dealing with an oil spill in the event of a Line 5 failure is required under the Clean Water Act.

The pipeline carries oil and natural gas liquids used in propane from Superior, Wisconsin, to Sarnia, Ontario. A four-mile (6.4 kilometre) segment divides into two pipes that lie across the bottom of the straits, which connect Lakes Huron and Michigan.

Mike Shriberg of the National Wildlife Federal and a former member of Michigan’s Pipeline Safety Advisory Board says the problems with Line 5 reported Thursday should result in its demise.

“How many more shoes have to drop until we stop putting the Great Lakes, our drinking water, our economy and our way of life at risk?” Shriberg said in a statement Friday. “The National Wildlife Federation applauds Governor Whitmer and Attorney General Nessel for requiring Enbridge to prove that Line 5 is safe.”

Shriberg contends there have been at least 33 spills from the land-based segments of the 67-year-old pipeline. 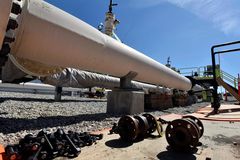 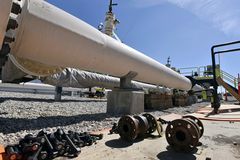 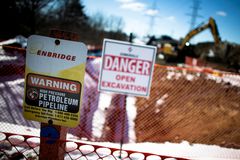