Vancouver-based Nevsun had been seeking a white knight after rejecting a series of hostile takeover offers from Toronto-based Lundin Mining on valuation grounds.

In a statement, Nevsun announced it had reached a friendly deal with Zijin Mining for $6 a share, 26-per-cent above Lundin’s $4.75 tender offer.

During a conference call with analysts on Wednesday, Nevsun chief executive officer Peter Kukielski called the takeover by Zijin Mining an "excellent outcome," after a thorough strategic review, which saw the company contact around 50 counterparties. Nevsun considered various takeover scenarios, including selling its assets piecemeal to more than one buyer before settling on Zijin Mining.

Shares in Nevsun surged by 17.8 per cent to close at $5.82 a share on the Toronto Stock Exchange on Wednesday, a sliver below Zijin Mining's offer.

In an interview, Mr. Kukielski said he didn’t anticipate any trouble winning regulatory approval for the deal considering the company’s main assets are located abroad, and it only has a very small head office in Canada, with few domestic jobs on the line. The offer is subject to approval by the Canadian government under the Investment Canada Act and the Competition Act.

“We’re pretty confident it will be approved,” he said.

“It’s a 75-day process. There’s no indication it should take longer.”

Zijin Mining has done a number of mergers and acquisitions transactions with large Canadian mining companies over the years, including partnering with Barrick Gold Corp. on its Porgera underground gold mine in Papua New Guinea and with Ivanhoe Mines Ltd on its Kamoa-Kakula copper project in the Democratic Republic of the Congo. Zijin Mining trades on both the Shanghai and Hong Kong Stock Exchanges and has a market capitalization of around US$10-billion.

Mr. Kukielski said that while Nevsun will no longer actively pursue takeover deals with other parties, if another bid should surface that is superior to Zijin’s, it will consider it.

As to whether Lundin will come back with a higher bid?

“While it is possible for Lundin to put forth a more attractive offer given the scarcity of high-quality copper development projects, we view it as unlikely,” said Sam Crittenden, analyst with RBC Dominion Securities Inc., in a note to clients.

He said there was financing risk associated with a higher Lundin offer and it's clear that Zijin is a motivated buyer.

Paul Conibear, CEO of Lundin, declined comment on whether the company will bid again.

Lundin's interest in Nevsun was first made public in May, when the miner tabled a cash and stock proposal worth $5 a share, in conjunction with a junior partner, Euro Sun Mining Inc. Lundin eventually ditched Euro Sun and came back with the all-cash offer.

Nevsun has two main assets – the Bisha copper and zinc mine in Eritrea and a high-grade Timok copper-gold project in Serbia. Timok is considered by analysts to be one of most attractive undeveloped projects of its kind in the world.

Lundin has tried and failed to acquire the Timok project on a number of occasions, bidding US$265-million in 2016 to buy it from the owner Freeport-McMoRan Inc.

So far this year, US$9.5-billion worth of M&A has been unveiled in the Canadian mining sector, according to Thomson Reuters, compared with US$12.6-billion for the entirety of 2017.

Earlier in the year, Australia's South32 Ltd. paid $1.8-billion to buy the 83 per cent of Vancouver-based zinc miner Arizona Mining Inc. that it doesn't already own, the second biggest deal this year by value. 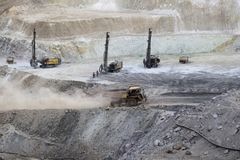