The Canadian oil field services sector is expected to continue to suffer as it enters the summer drilling season despite recent developments such as the approval of the Trans Mountain pipeline expansion and the election of a conservative government in Alberta.

In a report that forecasts lower second-quarter revenue for most Canadian operators in the industry, RBC Dominion Securities analysts say they’ve cut their 2019 rig activity and well counts for this year by between 6 per cent and 8 per cent and in 2020 by 5 per cent to 6 per cent.

They say the reduction reflects a slow start to the third quarter last month due to wet weather in Western Canada, along with lower producer spending due to softer commodity price forecasts and continued oil production curtailments in Alberta.

The downgrade reflects what is being seen throughout the industry these days thanks to a lack of investor confidence in Canadian energy, said John Bayko, vice-president of communications for the Canadian Association of Oilwell Drilling Contractors.

“I think it has a lot to do with policy,” he said Tuesday, citing Ottawa’s recent approvals of Bill C-69 to revamp the way energy projects are approved and Bill C-48 to ban oil tankers off B.C.’s northern coast.

“We just haven’t seen any commitment to this industry in this country that would cause people to think there’s a long-term plan for it.”

There were 146 drilling rigs working or moving in Canada on Thursday out of an available fleet of 547 rigs, he said, compared with an average in July, 2018, of 264 rigs.

At about 135 jobs for each rig, that means there are nearly 16,000 fewer people working in the industry now.

Many Canadian oil field workers have left the profession, Mr. Bayko said, but some are working in the United States because a total of at least 29 Canadian drilling rigs have been moved there since 2017.

“We’ve seen a considerable loss of talent … whether it’s to the United States through some of our high-spec rigs moving down there or just people moving on to other industries and not coming back to the [oil] patch,” Mr. Bayko said. “We haven’t had steady work, whether on the drilling or the services side, for coming on five years here.”

Springtime is normally the slowest season for the Canadian drilling sector because the melting landscape makes it difficult to move heavy equipment into backcountry locations.

The average western Canadian rig count for the three months ended June 30 was 90, down 23 per cent from the same period in 2018, RBC noted.

It pointed out drilling in Alberta, traditionally the most active province, matched that decline while B.C. was up slightly year-over-year and Saskatchewan was flat.

“The divergence potentially highlights the impact of oil production curtailments, which it seems some producers have addressed through natural declines, in our view,” RBC said in its report.

Alberta enacted the program to cut oil output starting in January to support crude prices. The cuts have been gradually reduced, but Alberta Premier Jason Kenney has said they may need to continue into 2020 if storage levels in the province remain high.

In its first-quarter report, it said it was relying on its U.S. operations for growth as its Canadian branches were generating a historic low of just 36 per cent of overall revenue. 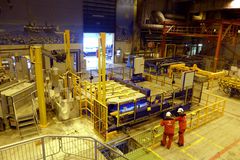 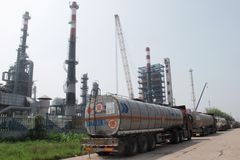 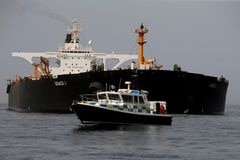