The metal scaffolding on the corner of Toronto’s Queen and Yonge is cold and narrow. The thin planks underfoot offer little assurance. The space is tight, high above the teeming sidewalks below and the subway underground.

We are examining the damage up and down the outer wall of the once stately building at 2 Queen St. W. in Toronto, on the northwest corner of perhaps the most historically significant retail intersection in Canada.

Yet, the decay is extensive. Project manager Annabel Vaughan of ERA Architects points out section after section of cracked yellow-beige brick. Further along the wall, large swaths of the store’s original exterior terracotta detail have been brutally scraped off, not just by a century of winters and downtown pollution, but by decades of architectural abuse.

Now, the current landlord Cadillac Fairview is hoping, at a hefty expense, to restore the building to its original, 1896 prominence, renewing the welcoming curved brick entrance hugging the sidewalk and turning the building into an upscale retail space connecting to the Toronto Eaton Centre.

Initially, Cadillac Fairview, which also owns the adjacent shopping centre, had a different plan. It sought to build a soaring tower on the site, using the façade of the old building as street-level ornamentation – a stylistic double-take common among a number of new towers throughout the city.

Yet, when it became clear that the plan wouldn’t get the city’s approval, Cadillac Fairview changed course, shifting to an approach that emphasized restoring the building’s original elegance as a central retail store, with a modest three-storey glass extension on top “distinguishable from and visually subordinate to the existing building,” as it says in ERA’s heritage impact assessment (wording that tries to drill home the new, more modest intent).

The first two extra stories are intended as office space, with the top level designed as a restaurant and outdoor terrace. Cadillac Fairview is still in talks with prospective tenants.

“It really changes the pro forma on a site like this,” said Philip Evans, a principal at ERA. The new plan meant changing from a focus on maximum profit for Cadillac Fairview to concentrating squarely instead on the building’s retail heritage and turning it into a showpiece property, like the attention-getting, revitalized pedestrian bridge just steps away, designed by Zeidler Partnership Architects between Eaton Centre and the Bay department store. (To clarify their different roles, Cadillac Fairview is the landlord, while Zeidler, which designed the Eaton Centre and has remained with the mall throughout its continual rounds of renovations and revitalizations, is the principal architect. ERA is the heritage consultant.)

Cadillac Fairview won’t reveal the cost of the new project, yet “no doubt this is far more expensive than any new building in Toronto,” said David Stewart, senior director at the company, as we surveyed the construction site, adding that the restored property will be “very true to the original in terms of shape and size of bricks, the size of mortar joints, the terracotta. Everything has been mapped to the millimetre. I like to call it a faithful recreation of what was here.”

The interior has been remodelled so many times that the remnants of the original building are mainly just the outside wall, save for some early, round, interior steel beams and the remains of an old wooden elevator shaft. The inside is now gutted and will be entirely rebuilt. The building’s history lies mostly in the smallest exterior details, such as the gilt lettering of the store’s first owner, Philip Jamieson Clothier, inlayed in stone, which had long been hidden by subsequent owners. The backing wall behind the street-facing bricks will also be one of the only remaining pieces of the original building left intact, because so much of the damaged streetside brick and terracotta need replacing.

By the 1920s, the building had become the flagship Toronto downtown Woolworth’s store. The old Eaton’s store was its imposing neighbour, half surrounding the building to the west and north. Across the street stands the stone bulwark of what was the Simpsons department store building, now home to Hudson’s Bay.

By the 1960s, the 2 Queen St. W. building was severely showing its age. The stone arches that bookended the building’s exterior had long been removed, and the façade had likely been sandblasted, which is one way to clean brick, but also the surest way to destroy it. Yet, the worst horror came later in the 1960s, when Woolworth’s, as part of its rebranding at the time, decided to spruce up the exterior by cladding the entire front of the building with a sheath of white metal, resulting in the terracotta features simply being scraped off and covered over – a fit of modernism to spite the face.

In the 1980s, the cladding was removed, and some of the street-facing brick was exposed again. Some sections were replaced, while others were covered over with grey siding. The renovation by architect Lloyd Alter was at the time “a very well done heritage conservation piece. There are reasons why he does this. The building was in really bad shape,” Ms. Vaughan said. The building subsequently went from being a Royal Bank branch, to life as a Tower Records store and eventually an outlet for the outdoors wear retailer Atmosphere.

Yet, over the past two decades, the building and its northwest corner became a dispiriting grey zone. The allure has been inside the shops, not outside on the sidewalk. “One of the biggest criticisms of the mall was that it turned its back on Yonge Street. And Yonge Street has been struggling ever since, because it used to be lined with a bunch of little shops,” Ms. Vaughan said.

“When the Eaton Centre was built, Yonge Street wasn’t very nice,” Mr. Stewart noted. “We’re trying, slowly, as we change tenants and evolve the mall, to open it up to the street – getting more daylight in, offering different ways to enter and exit the mall.”

And here we get to the true essence of the restoration: 2 Queen St. W. has always been in flux. It has been continually altered to serve new owners over the decades. With precious little information to go by, the current restoration has had to rely largely on a single photo taken in 1897 of the original building, in an effort to reconstruct the outer detail and to bring back the store’s connection with sidewalk life.

In this sense, Cadillac Fairview is restoring the building to an idea of what the building once was, not what actually remains, since so much of the original physical structure is long gone. “There was stuff being done to this building at every iteration. No one person caused this demise,” said Ms. Vaughan, crouching on the scaffolding to examine another section of brick and pointing to all that needs fixing.

Did Calgarians dodge a real estate bullet by rejecting the 2026 Winter Games?
December 4, 2018 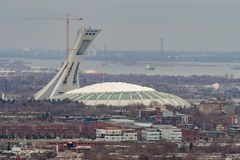 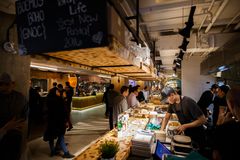 Follow Guy Dixon on Twitter @Guy_Dixon
Report an error Editorial code of conduct
Due to technical reasons, we have temporarily removed commenting from our articles. We hope to have this fixed soon. Thank you for your patience. If you are looking to give feedback on our new site, please send it along to feedback@globeandmail.com. If you want to write a letter to the editor, please forward to letters@globeandmail.com.
Comments are closed