The Big Six banks occupy some of Canada’s most iconic towers, but they’re not content to maintain the status quo - many are moving their headquarters or expanding into new signature spaces.

Owned or leased? Owned, for sale.

Trivia: Before deciding to relocate, the bank had already renovated several storeys, at a cost of about $3-million each. So far, 10 storeys have been renovated; the bank will continue to make more modest renovations until its new headquarters is ready to occupy.

Expansion plans: Relocating to a new headquarters on Saint-Jacques Street in about 2022.

Trivia: The complex contains 14,000 windows, each coated with 24-karat gold, valued at $70 a window when installed.

Expansion plans? While Royal Bank Plaza remains the iconic headquarters and the centre of its global operations, the bank has already expanded its head-office activities throughout several buildings in downtown Toronto. They include: RBC WaterPark Place, its domestic retail headquarters, at 88 Queens Quay West – completed in 2014; RBC Centre, at 155 Wellington St. W. – completed in 2009.

Trivia: A landmark of modernism, designed by architect Ludwig Mies van der Rohe, TD’s headquarters is a six-tower complex home to 21,000 employees. The entire complex is recognized under the Ontario Heritage Act, and one tower contains the façade of the 1937 Toronto Stock Exchange. The whole complex is built on the site of the old Bank of Toronto, which merged with the Dominion Bank in 1955 to create TD.

Expansion plans: TD’s complex is the largest by far of the Big Five banks, but as of last spring, TD was looking for an additional half-million square feet of office space in the city core – but had been stymied in its search by the city’s low vacancy rate.

Owned or leased? Leased. Owned by KingSett Capital and AIMCo.

Trivia: Despite its name, Bank of Nova Scotia moved its headquarters to Toronto all the way back in 1900. Its previous headquarters was a 27-storey, Beaux-Arts mid-century skyscraper completed in 1951, which is today part of the plaza and connected to the larger building via a 14-storey glass atrium. The main building is the third-tallest in Canada, at 68 storeys.

Expansion plans: This past August, Scotiabank signed a 15-year lease as anchor tenant in the third tower in Brookfield Properties’ Bay Adelaide Centre, to be complete by 2022. Scotiabank also expanded into a 70,000-square-foot “digital factory” in the old Sun Media building, with staff specifically focused on tech endeavours. It features a neon-lit bowling alley and a bar, and was based in part on the workspaces of tech giants Google and LinkedIn.

Trivia: The complex’s original 1931 Art Deco tower was the tallest in the British Commonwealth until 1962 – when it was surpassed by a different CIBC property in Montreal. It was also the tallest building in Toronto until the first tower in the Toronto-Dominion Centre was completed in 1967. Another building on the site, Commerce Court West, took back the tallest-in-Canada title from 1972 to 1976.

Expansion plans? CIBC is moving its head office to CIBC Square, an under-construction complex to be built at 81 Bay St. and 141 Bay St., on opposite sides of the rail corridor running through the city’s downtown, and connected by a one-acre elevated park. Comprising 2.9 million square feet, it will be owned Ivanhoé Cambridge and Hines. CIBC will be lead tenant, leasing 1.75 million square feet, for 14,000 employees. 81 Bay is to be completed in 2020, and 141 Bay by 2023. The bank refers to it as a “modern urban campus.” The bank will retain some staff at its current headquarters.

Trivia: So named because BMO was the first bank in Canada, First Canadian Place is also the tallest skyscraper in Canada, and until several years ago was clad in 45,000 white Carrara marble panels. When one fell off during a storm in 2007, the entire tower was reclad in similarly coloured glass. As the tallest structure in the city besides the CN Tower, 16 radio stations maintain transmitters on its roof.

Expansion plans? BMO is currently building a 346,000-square-foot “urban campus” for 3,500 employees at Toronto’s iconic intersection at Yonge and Dundas streets. Like National Bank’s new headquarters, it will be a tech-focused complex featuring open floor plans and collaborative workspaces. The bank will maintain its current headquarters at First Canadian Place. 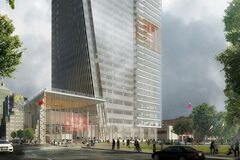