The news for big retail stores seems dire in the age of online shopping. Sears stores that were once anchors of shopping malls have become empty shells. Hudson’s Bay Co. is preparing to shut as many as 10 of its U.S. Lord & Taylor outlets, including its iconic Fifth Avenue flagship in New York. Toys “R” Us closed the last of its U.S. outlets a few weeks ago.

But some retailers are still opening large stores, seeing an opportunity to reach a new generation that’s become used to shopping on computer screens. They’re designing the spaces to showcase experiences, rather than lining shelves with inventory.

William Ashley Corp., a 71-year-old china and home décor store, reopened its doors in what had formerly been an underused retail arcade of Toronto’s Colonnade on Bloor Street after 30 years as an anchor tenant of the nearby Manulife Centre. The new 15,000-square-foot concept store features interiors fitted with floor-to-ceiling cabinetry, stage-lit showcases and tables set for dinner parties. Glittering chandeliers drop from seven-metre-high ceilings and a lounge area encourages visitors to sit down for tea or coffee served in designer china, or attend seminars on craft cocktail making or flower arranging.

Meanwhile, Samsung Electronics Canada took a two-storey corner of the former Sears store in Toronto’s Eaton Centre and created a space with a centrepiece circular staircase. The interior resembles a modern art museum more than a store. LED pillars carry the company’s slogans and each zone of the open-concept store has attendants who encourage hands-on encounters with product lines, from kitchen appliances to home entertainment to virtual reality goggles.

In another innovative shift, Flight Centre Canada, best known for small storefront sales offices decorated with brochures, took over a 19-century building at the corner of King Street West and Spadina Avenue in Toronto that was originally a garment factory and created a three-storey Toronto Travel Centre designed to inspire people to travel.

The target demographic for these new stores is mostly millennials who are looking for experiences they can’t get elsewhere, says Marcella Au, an associate with Quadrangle Architects Ltd., which designed both the Samsung and Travel Centre spaces.

The emphasis is on getting people into a comfortable and intriguing environment in which they can discover technology and new possibilities. “They may walk away without buying anything, but they will come back when they are ready to buy, because they’ve had such a positive experience,” she explains.

For instance, at the new Travel Centre, “we use the retail space as a stage that plays homage to travel. The three-storey interior was influenced by 19th-century explorers’ clubs and movies about fantasy travel, including The Life Aquatic with Steve Zissou. All the staff are mobile and you can sit down in a lounge or library and research or have a discussion about a potential trip in a home-like space.”

Another trend is toward more boutique spaces within a larger format store, Ms. Au says. It’s not happening as much in Canada yet, but in the United States and Asia, brick-and-mortar stores with large square footages are being subdivided into marketplaces shared by a number of brands.

Sharing space is also happening to attract more shoppers to a formerly single-brand store. At Lululemon Athletica Inc.’s store on busy Queen Street West in Toronto, Quadrangle shifted the athletic merchandise away from the windows and designed the front area of the store as a marketplace for a rotation of pop-up companies. “A popular store in hot weather is one selling charcoal ice cream. Everyone wants to try the latest food in Toronto and there have been lineups on the street. But ice cream is seasonal and with a pop up you can reconfigure the space to another brand that aligns to the business,” Ms. Au says.

For its transformation, William Ashley did extensive research on how to stay relevant to new generations of customers, says Jackie Chiesa, the Toronto-based company’s president.

“We are looking to complement online retailing and we feel that nothing replaces the tangible aspect of touching and seeing how pieces all fit together on a table. You don’t get that online,” she says.

“Retailing is more visual than ever, so we wanted an ‘edutainment’ factor. A café was an important element, where we can actually serve coffee and tea on products that people can try before they buy. We also have partner brands who do parties and dinners in the store.”

Planning for the move started three years ago and the company looked at four alternative spaces. Ashley had shifted to a pop-up shop on Bloor Street as its former premises in the Manulife Centre was undergoing renovation. “We wanted to stay classical and elegant and we need a large space to display all the possibilities.”

The company had always been on Bloor Street and there were no suitable street-level showrooms available. But at the Colonnade, on Bloor near University Avenue, a large part of the underused second floor was available, although it is about a quarter smaller than the previous store. “We did a lot of studies of how to make displays more efficient and show as much product without the store feeling cluttered,” Ms. Chiesa says.

A challenge was the historic character of the building, says Matthew Davis, principal with Toronto-based DesignAgency, which planned the transformation. The retail and residential Colonnade, designed in the early 1960s by architect Gerald Robinson and engineer/builder Irwin Burns was groundbreaking in its day with its sweeping curves and exposed concrete frame influenced by Le Corbusier’s Brutalist apartment complexes in France. The façade has a heritage designation, and while the interior did not, they wanted to pay homage to its design.

“We wanted to play off the architecture of the building and its arches and curves,” by repeating arches and keeping oval windows along the rear that overlook the University of Toronto campus, Mr. Davis says.

But its looming concrete walls and terrazzo floors felt dark and industrial. “We decided to clad the concrete columns with patterned panels in white, leaving only a gap near the ceiling that reveals the historic look.” The redesign added spotlights everywhere to highlight showcases as well as dramatic chandeliers, including pieces by Waterford and Lalique.

To stay within a tight installation deadline, the cabinetry, tables and fixtures were fabricated offsite and all the design elements were installed in a sequence as soon as the new mechanical and electrical systems were in place. “It required countless visits to the shop to review everything that had been designed on CAD [ computer-aided design] programs. You can use a lot more imagination when you can walk everyone through the store in virtual reality.”

Among the innovations are display cases with slide-out table tops that can be set up with china, flatware and glassware to see how it co-ordinates.

The customer mix has already changed since the new store opened in April, Ms. Chiesa says. “People are coming to the store due to word of mouth and experiencing the products in a new way. Especially with modern condos being smaller, they want to find signature pieces that define them and look great in a small space. So the displays are deliberately designed to showcase individual items and let you walk around them.”

The trends are part of an evolution, but the traditional retail store is not going to die, Ms. Au predicts. “People are always going to want to shop, see and touch and taste and smell.” 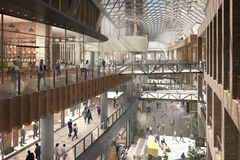