If there were a gold medal for relaxing on patios, it could easily be won in Vancouver’s Olympic Village. On warm sunny days, occupants of the waterfront community’s 1,100-plus residential units flock to the pubs and restaurants lining Milton Wong Plaza to savour microbrews and skyline views over False Creek.

With condo prices topping $5-million and 100-per-cent commercial occupancy, the former industrial area – now rebranded as the Village on False Creek – has clearly become one of the most desirable residential districts in Vancouver. And for good reason: Having achieved LEED Gold certification for its green-roofed buildings, and after the opening of the 45,000-square-foot Creekside Community Centre, the Olympic Village won the 2013 Urban Land Institute award for urban open spaces.

But the development’s prospects weren’t always this sunny. With the 2008 global financial crisis in full swing, and with the clock ticking toward the 2010 Winter Games, the city was forced to finance, and eventually take over, the billion-dollar project from the bankrupt Millennium Development Group. The situation went from bad to worse after the athletes departed. With sales flagging, more than 60 condo owners filed a class-action lawsuit demanding refunds after construction problems such as insufficient heating and bubbling hardwood floors were documented. The suit was eventually dropped, however, and Vancouver’s real-estate boom, combined with strong work by Ernst & Young and Rennie Marketing Systems, helped turn the Village’s fortunes around.

Happy endings like this one don’t always apply to former Olympic properties. Indeed, despite pledging to reduce the need for new buildings and infrastructure by reusing venues from the 1988 Winter Games, as well as staging some events in Edmonton and Whistler, B.C., Calgary’s recent 2026 bid was partly derailed by the potential for cost overruns and white elephants that loom over all such projects.

Here, then, are five other notable examples of property-related success, turmoil and failure in the wake of the Olympic Games:

Extensively renovated to stage field hockey at the 1996 Summer Olympics, Alonzo Herndon’s troubles began when Morris Brown College discontinued its sports program in the midst of a 2002 financial mismanagement scandal. Since then, the 15,011-seat venue on the college’s campus has reportedly fallen into severe disrepair, with graffiti covering its crumbling concrete stands and the playing field overgrown with weeds.

This decrepitude stands in stark contrast to the new home of the National Football League’s Atlanta Falcons, which is located just four blocks, or one very long field goal, to the east. The 71,000-seat Mercedes-Benz Stadium is seen as a catalyst for local revitalization, which has also been spurred by the 2014 purchase of the 37-acre Morris Brown campus by Atlanta’s economic development agency. Alonzo Herndon Stadium’s days may be numbered, but the future of its surroundings is brightening.

Had Calgary’s city council not turned down WinSport Canada’s 2012 proposal to build a major retail complex at the foot of its Canada Olympic Park, the suburban facility would probably have grown more than it already has since it hosted luge, bobsleigh and ski-jumping at the 1988 Winter Games.

In addition to a steady stream of on-hill enhancements, COP has been home to Canada's Sports Hall of Fame since 2011. That same year, the Canadian Winter Sport Institute opened four indoor ice rinks, which were later incorporated into the Markin-MacPhail Centre as a training hub for Canadian athletes that includes a gymnasium, medical centre and office tower with tenants such as the National Sport School.

The biggest Olympic Village in history is shaping up to be the biggest post-Games property bust. After five years of construction was marred by protests and forced evictions of surrounding residents, serious plumbing and electrical hazards were reported mere weeks before the start of the 2016 Summer Games. The Australian Olympic team even went so far as to boycott the Village after their assigned lodgings were deemed uninhabitable.

Two years later, Rio’s city council is reportedly spending millions of dollars each month to maintain the Village’s 31 buildings and 3,604 apartments, most of which are unoccupied. The city’s former governor, meanwhile, was recently sentenced to 45 years in prison after accepting bribes from the Brazilian construction firm that built the Village.

Still the poster child for post-Games property headaches, the stadium nicknamed “the Big Owe” was originally estimated to cost $134-million. More than four decades, several unreliable roofs and $1.6-billion later, the 56,040-seat venue for the 1976 Olympics has suffered through everything from a major fire in its inclined tower to various snow-induced collapses.

Given that demolishing the place has been estimated to cost as much as $700-million, the Quebec government has opted to keep it viable by spending $250-million more on another new roof. A high-definition scoreboard was installed in 2015 and, in another surprisingly positive development, Desjardins Group recently announced plans to move about 1,000 employees into seven floors of the stadium tower.

Sporty house-hunters are gravitating toward Stratford City, a $3.4-billion mixed-use development in London’s East End that has been built around one of the principal hubs of the 2012 Summer Olympics.

In addition to 16,400 new homes, the Stratford Regional and Stratford International railway stations, and the fourth largest shopping centre in Britain, the project’s 2.9 million square feet of retail and leisure space includes several of the Queen Elizabeth Olympic Park’s competitive facilities – the Copper Box multisport venue, the aquatics centre, and the velodrome to name a few – as well as one of the largest urban parks to be built in Western Europe since the late 19th century.

Plans for the redevelopment of the former athletes’ village, meanwhile, were recently revealed with the announcement of the $1.9-billion East Bank project, which is slated to include university facilities, a Victoria and Albert museum for decorative arts and design, and new BBC studios upon its expected completion in 2022. 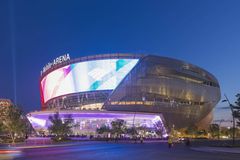