The Humeniuk family has owned TPC Toronto at Osprey Valley for more than 25 years and now is finally ready to fulfill the vision they’ve long had for the hidden gem golf club.

Expansion plans, which include adding accommodations to the property in bucolic Caledon, northwest of Toronto, aim to give the public club’s members and visitors a deeper experience than just a round of golf.

The expansion may also end up having ripple effects throughout the sprawling town that covers 170,000 acres of rolling land, boosting its reputation as a golf hot spot and even spurring economic, tourism and residential development.

A similar enhancement at a nearby private club, Devil’s Pulpit Golf Association, strengthens that potential.

Together, the clubs propose to add commercial spaces and housing that they say will contribute to Caledon’s growth without compromising any of its rural flavour or the integrity of its environmentally protected land.

“Our hope is to create a destination, whether it’s for people to live, for people to come visit, come for a day or a few days – not only to play golf but also enjoy all the amenities,” says Chris Humeniuk, president of Osprey.

Mr. Humeniuk’s father, Roman, and uncle, Jerry, are land developers who bought Osprey from its founding owner in the early 1990s after the club got into financial trouble. The brothers later snapped up some adjacent land, creating a big enough property for three 18-hole courses.

The family company’s portfolio has grown to consist of a total 1,700 acres in Caledon. Its holdings also include a residential subdivision under construction near Osprey in Alton, one of the many villages within the town’s borders.

Noted Canadian golf architect Doug Carrick designed the three courses and all of them are ranked within the country’s top 100 by influential ScoreGolf magazine. But the club has remained a hidden gem, catering mostly to locals and Toronto golf aficionados who were patient enough to drive an hour beyond city limits and past the suburban sprawl of Brampton to get there.

Roman and Jerry saw the potential – a sign at the club’s entry once referred to Osprey as a “resort” – but never fully carried through. “I won’t say they ran out of time, money or energy,” Mr. Humeniuk says. “It’s just they never pulled the trigger or executed on the vision. It was such a huge vision. I’m not sure we ever knew where to start.”

But the trigger has been pulled now. With Mr. Humeniuk taking over Osprey’s operations a few years ago, the family has made the commitment to take the club to the next level over the coming years.

Among the first signs of a new identity, Osprey joined the Tournament Players Club, a U.S.-based network of courses owned or operated by the PGA Tour, and rebranded as TPC Toronto at Osprey Valley in 2018. It also signed on to play host to the Osprey Valley Open, a professional tournament on the third-tier Mackenzie Tour – PGA Tour Canada.

Its biggest changes are yet to come. A new clubhouse is on the drawing board, as are cottages or villas throughout the property for overnight stays. To extend the club’s reach beyond just a golf audience, event space and a conference centre are also planned. “We recognize golf is not enough,” Mr. Humeniuk says.

He has examined other world-class golf resorts, including Cabot Links in Nova Scotia, for expansion ideas, but found the greatest inspirations at a California winery he once visited on holiday. Cakebread Cellars in Napa Valley showed him, he says, that a functioning business can do double duty as a charming community hub.

Osprey’s on-site lodging would augment Caledon’s limited supply, which includes the quaint Millcroft Inn in Alton, bed-and-breakfasts and chain hotels that skirt nearby Orangeville and Brampton. The community spaces would fill an identified need to accommodate everything from small corporate gatherings to weddings, Mr. Humeniuk says.

A 10-minute drive from Osprey, Devil’s Pulpit has the same urge to fill gaps, albeit for the benefit of its members and their guests, and not the general public. The private club has two 18-hole layouts that are also ranked in Canada’s top 100 and clubhouses at each, but little else.

New owner Longridge Partners Inc., which bought the club this year, wants to add amenities that could include estate housing, shorter-term lodging and other recreational facilities besides golf, while stepping up services such as dining.

Longridge is still formulating the details of its multiphase plan, but its overarching vision is to create a “full-service experience” that will appeal to existing members while attracting new ones, especially couples and families, who want high-end living and leisure in a setting that’s close to the city but surrounded by nature in the protected Oak Ridges Moraine, says Mackenzie Crawford, president and co-founder.

The developer owns about 2,000 acres of land in Caledon, which is protected against aggressive and dense development because it’s part of the Oak Ridges Moraines and Ontario Greenbelt. It is also within the Niagara Escarpment, a UNESCO biosphere reserve. But that suits Longridge, which specializes in sustainable projects.

Mr. Crawford says any changes to the Devil’s Pulpit properties would mesh with Caledon’s gentle evolution from strictly a farming and industrial centre into a destination rich with nature and recreational activities, craft breweries, cideries, chef-driven restaurants, artisan enterprises and other services.

“The vision of the town, without putting words into their mouth, is [that] it’s got to be a place that leverages spending time outdoors,” Mr. Crawford said. “It’s already great for that. It’s going to pivot from warehousing and agriculture to find new opportunities for growth. It has a great potential to become a cottage-alternative destination, both in the sense of weekend time and seasonal time, but also just as a permanent space that people choose to live in a cottage-style environment."

While Longridge’s plans gestate, Osprey is ready to move ahead.

It has funding available – Mr. Humeniuk sold his mortgage and financial services company, Community Trust Co., last year, and said the proceeds would allow for a “tremendous capital injection" into the expansion. Osprey has also hired Hicks Design Studio of Oakville, Ont., to draft the new buildings, which will likely be in a rustic chic style or West Coast winery style, compatible with the vibe of laid-back Osprey and rural-but-affluent Caledon.

Osprey recently met virtually with the town’s planning staff to go over its proposals and identify any planning and zoning requirements that need to be resolved or provided to the town as part of filing complete development applications.

In a statement, Caledon Mayor Allan Thompson said the town has a goal of increasing its overall tourism, including sports assets, and “the potential development at TPC Toronto at Osprey Valley aligns very well with this goal.”

The town’s tourism strategy can be found in a 113-page document from 2014 that says golf – along with other outdoors activities such as equestrian, nature appreciation and hiking – could be engines for growth in tourism, which accounted then for 12 per cent of the jobs in the municipality.

The report notes Caledon has at least nine golf clubs at which up to 450,000 rounds a year are played. Two of those clubs – Osprey and Devil’s Pulpit – have between them five 18-hole courses ranked in the top 100, unheard of for a town of about 70,000 people.

“Caledon should showcase and celebrate the high quality of its golf courses, advocate for the industry and find ways to leverage the impact of golf,” the report says.

The Osprey expansion also has the backing of the community, according to a resident who opposed another golf project in the past. Insurance agent Tim Forster, who spoke out against Kaneff Corp.’s proposal to build a course on prime farmland about 10 years ago (that project ultimately stalled), says the Osprey plans are sensitive to the environment and within its already-developed property.

Mr. Forster adds Osprey has been a good corporate citizen over the years, donating thousands of dollars to local causes and holding lots of community fundraisers and other events. (The most recent was $350,000 in COVID-19 relief donations for various community and health care services.)

“The expansion will be great for the community, add jobs and draw customers for local businesses,” Mr. Forster says. “That is why there is no resistance, only support. … This for Caledon is a good news story.” 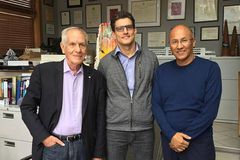