It was once standard procedure for office workers in Ottawa’s downtown core to zip over to Hy’s Steakhouse for a postwork cocktail or dinner, with the tab put on an expense account.

But since that former dining institution shuttered in 2016, the 8,000-square-foot space has sat empty – save for construction workers walking through on their way to the new light-rail transit stop at the corner of Queen Street and O’Connor Street in the shadow of Parliament Hill.

That’s about to change – Queen St. Fare is moving in. It’s a food hall inspired by the buzzy multivendor dining concepts first made popular in Europe (the first food hall was in Harrods department store in London in the early 1900s) and then exported for the millennial set in New York and California.

Queen St. Fare will be Ottawa’s first food hall when it opens next month, and it comes at a time when they are popping up across Canada as an amenity for downtown office types and providing dining scene revitalization to areas that desperately need it.

“I think this is going to be a catalyst for a lot of change in the downtown,” says Sean O’Sullivan, the vice-president and general manager of Bentall Kennedy Ottawa, the property manager of the complex where Queen St. Fare is being built.

The end objective, he says, was to be an amenity for the 50,000 people who pass through the complex daily, and specifically, for the tenants of the building where Queen St. Fare will be located.

“We’re thinking like Toronto folks do, like Montreal and Calgary. If you want to get the best of the best, you need to offer amenities that are incomparable,” he says.

“We rent space to high-end tenants and they pay a premium for amenities, and this is the greatest amenity, next to the LRT, that anyone could hope for.”

Queen St. Fare will feature seven vendors and will have an art-deco-themed interior (think 1940s-bar style). Each vendor will have its own space for cooking and serving, plus tables for customers who choose to dine in. Capacity will be 390 people.

Mr. O’Sullivan says the biggest challenge – after convincing both the owners of the building and potential vendors that the idea is legitimate – was to get the mechanical and electrical systems in place.

Essentially, he says, they were taking seven air collection and conditioning systems that would be in each individual restaurant, and morphing it into one. “It was extremely complex."

The cost for a vendor was at least a quarter of opening a standalone restaurant, and René Rodriguez, the head chef at Mercadito, a Mexican street food vendor opening in Queen St. Fare, is excited for the new challenge.

“As long as you do some really good food, people will receive it well,” he says.

Mr. Rodriguez, a former winner of Top Chef Canada, says the biggest challenge from the restaurant side of things is to get brought up to speed. Literally.

“We’re going to be serving 200 people in an hour. The challenge is how we’re going to manage to provide both quality and speed. It will take some time to adjust,” he says.

In Toronto, the Assembly Chef’s Hall is entering its 11th month of operation at the Richmond-Adelaide Centre. It’s an 18-vendor setup, and Andreas Antoniou, the managing partner, says it’s been an enjoyable challenge. Some vendors, he says, have already recouped their initial investment (ranging from $35,000 to $150,000) because of their quick success.

Mr. Antoniou says there hadn’t been a business model that’s been conducive to allowing chefs to make great food in a sustainable format that caters to the near 500,000 people who live, work, and play in downtown Toronto.

“That’s what we’re most proud of,” says Mr. Antoniou. “To change the game a little bit.”

Located on the ground floor of 111 Richmond St., the home of Google’s Canada office, Mr. Antoniou says the space, which had been empty for more than a decade, needed to achieve a specific goal.

The experience needed to trump the free meal Google’s employees were getting every day, he says.

Since it’s part of Toronto’s downtown PATH network – which already has 18 food courts – Mr. Antoniou says the space was designed to be complementary but premium in nature to those operations, not unlike what Ottawa will see next month when Queen St. Fare opens. There are a plethora of food courts in the area.

Mr. O’Sullivan’s objective of offering an amenity to the office dwellers in Ottawa is the same in Toronto for Oxford Properties, the landlord of the Richmond-Adelaide Centre.

“[Oxford] has three million square feet [of office space] in the Richmond-Adelaide Centre,” says Mr. Antoniou. “And what we did is build an amenity for the employees that they’ll want to attract for the next 20 years.”

While Calgary’s first food hall’s timeline is comparable to Ottawa’s, it’s going to try something different in terms of location.

The 39-vendor Avenida Food Hall & Fresh Market is located in a former Sport Chek, and the food hall is instead about 20 minutes beyond Calgary’s downtown, in a bustling suburb.

Originally planned as a farmer’s market, it evolved into a food hall and the feedback, says Travis Callaway, a managing director at Strategic Group, the main investor of Avenida, has been very positive. It will open the week prior to Queen St. Fare.

“I won’t say [food halls] are the way of the future,” says Mr. Callaway. “But they are going to be a big part of the future.”

The biggest problem – after educating people that it was not a farmer’s market after all – was to renovate the 30-year-old building to go from handling sporting goods to spicy green curry.

“It’s very complex,” says Mr. Callaway. “It’s complicated enough opening a single restaurant in a single piece of real estate, but we’re basically opening dozens of restaurants under one roof, which presents a myriad of challenges.”

Duncan Ly, the chef at the helm of Foreign Concept restaurant in Calgary’s downtown, will be opening Takori – an Asian-Mexican taqueria – in Avenida.

He says operating out of a 200-square-foot space (versus his standalone restaurant) is going to be tough at first – for the same issues of volume and time that Mr. Rodriguez in Ottawa mentioned – but he says he will still have a full kitchen setup with two burners, a griddle, a grill, and a deep-fryer.

He knows the amount of science behind having all the vendors under one roof was difficult as well, but overall, he’s excited to offer something a little different.

“The more I thought about the area, I realized it was just waiting for something like this to happen,” Mr. Ly says. “As far as good restaurants goes, there was nothing like this out there.”

It’s a common refrain for food halls across Canada. Property managers are taking a model that’s worked in other metropolitan cities and applying it to big cities here, where options are limited.

“The lack of food offerings make things boring,” Mr. O’Sullivan says of the food options near his office. “We can do a heck of a lot better.”

Editor’s note: The original version of this story said 50,000 people work in downtown Ottawa. In fact, the 50,000 applies to workers who pass through the downtown Ottawa complex where Queen St. Fare is being built. 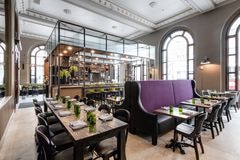