It’s logical that a port where the Credit River flows into Lake Ontario should be named Port Credit. Less logical is that a vast chunk of Mississauga’s prime lakeshore adjoining it should have been inaccessible behind high fences for more than a century – first as a brick yard then an oil refinery.

All that’s about to change in dramatic fashion with a redevelopment to create a master-planned commercial and residential community surrounded by parkland.

Highlights of the redevelopment named Brightwater will include nearly 3,000 new residences in a mix of condominiums and townhomes, as well as up to 150 affordable housing units. There will be more than 300,000 square feet of retail, restaurants and office space, as well as a future elementary school and proposed community centre. A focus of the development will be 18 acres of new green spaces, with public plazas and walking and cycling paths weaving through the site to a new nine-acre waterfront park.

“There are very few urban places anywhere where you can get to work on this scale,” says Ken Tanenbaum, vice-chairman of site remediation specialists the Kilmer Group and chairman of Port Credit West Village Partners, a joint venture that also includes developers Dream Unlimited Corp., FRAM + Slokker and DiamondCorp. “This gave us an ability to create a complete community on 72 acres that had been a brownfield site completely shut off from view.”

The project started in 2016 when Imperial Oil, which had acquired the decommissioned refinery in a 1989 acquisition of Texaco Canada, put the site on the market. To make the deal, the consortium first had to demonstrate to Imperial Oil that the site would be effectively remediated to eliminate any liability for pollution, Mr. Tanenbaum says.

Planning included a two-year program of nine consultations with the City of Mississauga and the community to determine a layout and diversity of buildings and amenities for a 21st-century village that will complement the 19th-century historic village to the east and 20th-century developments to the west.

In workshops with residents, the Business Improvement Area and local councillor, the community was excited by the opportunity to open up the waterfront but at the same time adamant that the development not overwhelm their quiet community, says Ralph Giannone, principal at Giannone Petricone Associates Architects Inc., the master plan architects.

The plan is to create green buildings in a variety of forms in a parklike setting. A new landscaped street network will connect Brightwater to the existing Port Credit community at Lakeshore Road West and Mississauga Road. Anchoring the development will be a city-owned waterfront park, which will include a proposed beach in an area that was the original jetty for ships to dock at the site. An ecological garden will connect the existing J.C. Saddington Park to Ben Machree Park, to the west, enhancing the waterfront trail network that further ties into Brueckner Rhododendron Gardens and beyond.

In the summer of 2019, the plan received the go-ahead from the City of Mississauga, but the start of construction had to wait for completion of a two-year site cleanup that removed 400,000 tonnes of oil-contaminated soil. A total of 16,000 truckloads of soil were hauled away and used as cover at a commercial sanitary landfill outside the region. Kilmer Group partnered with Walker Environmental Group to achieve carbon neutrality by purchasing carbon offsets for the emissions generated in the remediation and construction, Mr. Tanenbaum says.

Development will happen in stages, with the first being a cluster of three buildings south of Lakeshore Road that surround a landscaped Village Square designed for community events. The designs of two mixed-use commercial and condominium residences are by Diamond Schmitt Architects and interiors by Truong Ly Design Inc. A one-storey retail building between them, also designed by Diamond Schmitt Architects, features a curving green roof, inspired by the waves of Lake Ontario, that also provides a habitat for birds. Turner Fleischer Architects Inc. was also retained to design the gateway two-storey commercial building at the corner of Lakeshore and Mississauga Road. LCBO is the first announced tenant.

Each succeeding phase will have a different design team working within the overall concepts in the master plan. “While the redevelopment is all part of a master plan, a key element is ‘cohesive diversity’ so it doesn’t look like a housing development but still looks like it fits together both in architecture and landscaping,” Mr. Tanenbaum says.

The residential phases along the east and west edges of Brightwater will be low-rise and there will be eight high-rises from 15 to 26 storeys tall central to the site, along a linear park and promenade, which will become the main north-south street. Part of the master plan approval and agreement with the city is that at least 150 of the housing units will be market value rentals and a 0.8-acre parcel of the land be ceded to Peel Region for construction of 150 units of subsidized affordable rental housing.

The landscaping will feature cohesive diversity as well, says Adam Nicklin, principal and co-founder of urban design and landscape architects Public Work, which is developing the open space strategy. “Normally when you think about landscape, you think of greenery and trees, but we also want to include water as much as possible into the park experience.”

That includes the concept of “bioswales.” Rather than the usual urban approach of collecting storm runoff into pipes, a series of basins along the streets will capture rainwater and let it filter slowly through the ground toward the lake.

“We are doing the big-picture guidelines for materials design and within that, each of the development phases will have different landscape architects, which makes it feel more natural because there will be diversity of ideas,” Mr. Nicklin notes.

“We are trying to establish a diverse ecology and that will mean mixing species together, including fast-growing species and slower growing hardwoods, the way that trees establish in a forest,” he says.

A mature wood lot along the west will be retained with a trail through it and landscaped corridors through the entire site will connect to the lake.

It’s taken a long time to get this far and there are sure to be challenges in the estimated 10 years it will take to complete Brightwater, but Mr. Giannone is confident it will all be worth it. Even in its early stages, it will reveal Lake Ontario in a park-like setting once again after a century behind fences, he notes.

“It’s a gem of a site and I think people who choose to live or work there will have an exceptional quality of life.”

Highlights of the proposal include: 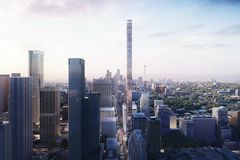 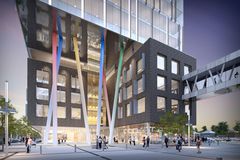