Law firms traditionally want their offices to reflect heritage and solidity, and Gowling WLG’s downtown Hamilton location had that in spades. For 14 years, its legal team has worked in a Greek-columned building with gilded ceilings at 1 Main St. W., which was built as a Bank of Montreal in 1905.

But with the lease clock ticking down, Gowling’s leaders saw an opportunity to make a bold shift that projects its innovative vision of the future. The firm will move to a purpose-built modern building in the suburban McMaster Innovation Park.

Gowling WLG was the first national Canadian law firm to locate in the Hamilton region and its office needs have grown by 40 per cent to 52 lawyers and 150 support staff since joining forces with Hamilton-based ESB Lawyers LLP in 2019. But the building project was not strictly about finding new space, says Louis Frapporti, the Hamilton office managing partner.

“Our new brand strategy extends beyond simply providing legal services. We want to win the future, which is about innovation and the next generation.”

The firm has been involved in commercialization of research at Mohawk College and McMaster University that has seen Hamilton develop as a tech hub.

Mr. Frapporti reasoned that it made sense to relocate in the middle of an innovation hub, but it was not immediately clear that the move to McMaster’s research park was the right one. Many of the staff said they were happy to remain in their downtown location, with convenient access to restaurants and amenities. It also took a series of discussions before the Innovation Park team committed to the idea, he says.

“There was an initial question of how a law firm fits with a research park,” says Ty Shattuck, chief executive officer of McMaster Innovation Park. “It took Lou to say: ‘We may not be the guys wearing lab coats and engineers, but you rely on us to bring ideas to life.’”

According to Mr. Shattuck, a research park needs to have diversity in skills, as well as tenants with compatible capabilities to create the right “collisions.”

“Whether it’s in IT, or how to craft a partnership agreement, to how to raise capital, legal services are a critical ingredient in creating the magic that turns ideas into reality,” he explains. “Gowling as a global firm brings a connection with financial customers all over the country and the globe.”

Since opening its doors in 1995, Gowling has established itself not only as one of Hamilton’s leading legal firms but an important driver of economic activity, developing partnerships with the city, as well as McMaster University and Mohawk College as part of an international corporate law firm with more than 1,400 legal professionals in 18 cities worldwide.

Although Gowling was welcomed to move into the Innovation Park, McMaster wouldn’t commit to financing the proposed four-storey building. Enter the Cora Group Inc., a family-run development company based in Waterloo, Ont., and a long-time client of Gowling. They agreed to finance and build the new office.

The design by Kitchener-based Neo Architecture is still coming together for “a unique collaborative space,” says Adrian Conrad, chief operating officer of Cora Group. “This is a project that will have a legacy because of how Gowling and the Innovation Park see the future and it will change the way things are done.”

Gowling specified that the building be extremely energy efficient, built to LEED principles, with a focus on employee comfort and well-being. Natural light is essential, so it will have lots of glass, but the building will incorporate solar shades to take the heat load off the building in the summer. Gowling will lease the two upper floors of the 90,000-square-foot building and other tenants and amenities, including a café, will take space in lower levels.

The project is still in the site-planning process and construction is expected to begin in the spring. There’s a tight deadline as Gowling’s lease expires at the end of 2021. “The last building we did was similar in size – 100,000 square feet – and that took 18 months to build, so it’s very doable, assuming we don’t run into events beyond our control,” Mr. Conrad says.

“We are looking at this as a communications hub, as well as a law office,” Mr. Frapporti says. “Because of where we are, we will have the luxury of having some of the brightest minds in the country only a few feet from our office and have the ability to broadcast what they are doing globally to our clients around the world. So we’re creating amenity spaces, like a wonderful rooftop terrace and wraparound patio as well as a café and we expect the building to become a meeting place.”

The Innovation Park is also adding amenities being built by third parties nearby, including a hotel, retail, wellness facilities and a daycare centre. All this could add to connections with potential future clients.

And the client base in Hamilton is expanding because the former steel town has become one of Canada’s fastest-growing tech hubs. According to a Tech Talent Report by CBRE in November, Hamilton scored the fastest job growth among mid-sized tech talent markets in Canada in 2019.

“Gowling has been an important player in making that happen. They’ve developed an expertise in helping new businesses get on the market,” says Judy Lam, manager of commercial districts and small business for the City of Hamilton.

While the firm is moving two kilometres outside the city core, it should complement the city’s attraction to growing tech companies, such as financial tech firm Q4 Inc., which is expanding into a newly renovated four-storey brick-and-beam building on King Street in downtown Hamilton, Ms. Lam says.

“We find developers are interested in bringing back heritage buildings, restoring their wood floors and exposing the brick, and putting in glass elevators. We have lots of them around and they are more affordable than in Toronto, so they are an easy sell,” she says.

There are also new buildings coming on, some as many as three towers, with multiresidential above commercial and, Ms. Lam says, “it seems that every surface parking lot downtown has been sold for planned development. I think you won’t recognize the downtown in a couple of years.”

What is the McMaster Innovation Park?

The 51-acre site along Highway 403, at the intersection of Longwood Road South and Aberdeen Avenue near the Niagara Escarpment, was formerly owned by Westinghouse Canada.

During the Second World War one of the manufacturing buildings made tanks and torpedoes. At 186,000 square feet, the five-level office and laboratory building, known as the Atrium@MIP, was formerly the Westinghouse headquarters and research labs. Several other buildings made appliances under the name Camco. The complex closed in 2005, when Camco was bought by Mexican company Controladora Mabe SA, which sold the facilities to McMaster University.

In addition to the Atrium, key facilities include the CanmetMaterials research centre specializing in metals and materials fabrication, processing and evaluation, and the McMaster Automotive Resource Centre, a 92,000-square-foot set of university labs for transportation research with a particular focus on battery and hybrid drive-train and technologies.

About a third of the Innovation Park is currently developed, with 700,000 square feet under management and 800 full-time employees. mcCallumSather Architects has developed a 10-year campus master plan and projections envision as many as two million additional square feet of research, support housing and amenities over the next 10 years, which could bring the park’s occupants and work force to as many as 5,000. 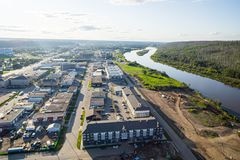 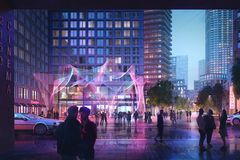 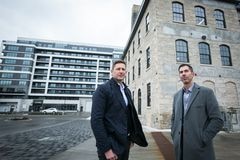