The corner of Front Street West and Spadina used to feel like the Western outback, alone and removed, even if only a few blocks from Toronto’s downtown core, facing noisy commuter rail lines.

Wellington, one street north, was a quieter, leafier anomaly with its historic buildings, yet broken by a big gravel parking lot, and King had its rows of similarly aged, converted brick warehouses, punctuated by a backpackers’ hostel.

That was the neighbourhood two decades ago, prior to the Concord Group developing the old railway lands with its skyline-enlarging CityPlace residential towers near the (then) SkyDome, and just before Allied Properties REIT accelerated its acquisition of brick-and-beam office and retail properties along King, west of Spadina.

Now, on any given summer afternoon, the King West area can feel like the core, a study in urban density, and an exercise in how big-ticket developers can shape the feel of a neighbourhood, even an urban one.

King West teems with affluence and millennials. The area is, you know, totally TAMI – that is, filled with the kind of technology, advertising, media and information firms that bring sought-after energy (helping to push real-estate demand higher).

The sidewalks can feel like catwalks and, according to Allied’s president and chief executive Michael Emory, no restaurant has failed along Allied’s section of King since the company started amassing property on both sides of the street west of Spadina. (There’s also bumper-to-bumper gridlock down Spadina leading to the Gardiner Expressway every afternoon rush hour, something less advertised.)

“Our goal was to curate the street, in the way you would a specialized merchandising environment,” Mr. Emory said. For instance, BMW’s Mini Canada had a showroom on King before its success forced it to move to a larger site on the far eastern edge of the downtown, while Tim Hortons was told, “thank you, but no thank you,” when it sought to open a franchise in the area. The King West outlet for the upmarket outdoor wear company Patagonia is the kind of retailer Allied coveted.

Rodney’s Oyster House is another, because the owners aimed to fit the restaurant snugly into the streetscape, to look as if it had been there since its old brick building was built, “which was perfect,” Mr. Emory said.

Now, Allied and RioCan REIT have partnered to extend that King West feel with their new, massive 7.8-acre, multi-use development at Front and Spadina marketed as The Well. The idea is a difficult one: to bring King West to Front, attracting office and retail tenants looking to buy into the vibe. There will also be 1,800 residential units (condos and rentals), adding 10,000 residents and office workers to the immediate area.

On the spot where this newspaper’s former newsroom and offices once stood at 444 Front St. West, there’s now a vast crater, six stories deep, that will house The Well’s underground parking and loading docks.

On top of that will stand a 39-storey office tower, a 39-storey residential tower, and then five smaller, mixed-use buildings, including hundreds of thousands of square feet of indoor and outdoor retail space, to be occupied in approximately three to four years. “That is a rough timeline right now,” said Andrew Duncan, senior vice-president of development at RioCan. The Well’s buildings facing north along Wellington will be only 13 storeys, reflecting the smaller scale of that street.

Now that the residential component has been sold off to residential developers (although RioCan will continue to own a portion of one of the residential rental buildings, splitting ownership with Woodbourne Capital Partners), the trick with the Allied and RioCan office-and-retail joint venture is to make the development not feel like an office and apartment complex with a street-level mall.

“Our goal is that you can walk from King West down across Wellington, through any of the alleyways into the project and feel like you haven’t left King West,” said RioCan’s Mr. Duncan.

Allied will manage the office property. RioCan will be the retail landlord, overseeing the retail tenants, a task that is crucially important if The Well is going to succeed.

“We have spent a lot of time, money and effort to try to get it right,” said Edward Sonshine, RioCan’s chief executive officer. It will be a retail mix very different from its malls across Canada, the word “mall” being anathema to what RioCan is going for. Still, it will require creativity to avoid a manufactured, mall-like feel. “You’re 100-per-cent right. There was a lot of fear of that,” Mr. Sonshine said.

In particular, RioCan is focused on creating a food market to help set the tone and possibly serve as the main retail draw.

“The first big decision we made was that we’re going to go with almost a Harrods-type food hall. The guys [RioCan staff] flew over to Europe and other parts of North America to look at food halls, and they are much more advanced in Europe,” Mr. Sonshine said.

“We learned a lot from food halls in Germany and in London. We said, ‘Let’s go that way. Let’s get local independent produce guys, bakers, butchers.’ Think of [Toronto’s] St. Lawrence Market, but modern and on steroids, in a beautiful urban environment, with natural light coming in and so on.”

RioCan is even talking already to a couple of independent sausage makers, he said, hinting at the level of specialization the developer is seeking. “We will have a dedicated person inside RioCan who hopefully is very food savvy to put this all together,” Mr. Sonshine said, never uttering the words “food court,” which, like “mall,” are verboten.

“You start with the food service and display tenants, such as art galleries. And as the area matures, you can attract more merchandisers, and it’s really a function of the pedestrian traffic,” said Allied Properties’ Mr. Emory.

By designing pedestrian pathways that feel like streets, “the whole goal is to create something that feels like a streetscape rather than an interior environment,” Mr. Emory said. And despite the high office tower that will anchor the development on the corner of Front and Spadina (and which make the mock-up pictures of the Well seem like a somewhat intrusive complex, possibly out of place), Mr. Emory said that “I’ve been very much explaining this to various office users as an extension of the King and Spadina neighbourhood. It shouldn’t be thought of as a project in and of itself. It should be thought of as an extension.”

Yet the office tenants that lease space at the Well, likely the same kinds of TAMI tenants from King West, will set the tone. That’s because retailers notoriously like to see who is in the neighbourhood first before committing. So, although the developers are already talking to retailers, it could be a long time still before they sign on.

“And only when these spaces are built will we really be prepared to lease them,” he said.

7.8 acres – Total size of the project 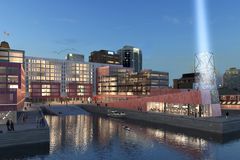 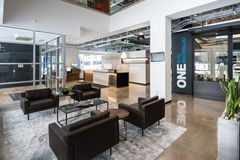 Towers modernized to ensure they continue standing out
June 18, 2018 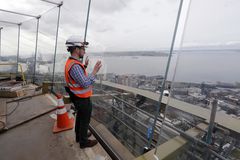