False Creek, the small inner harbour that separates Vancouver’s downtown peninsula from the western half of the city, used to be a hub of industrial activity in the city’s early days: ironworks, barrel makers, pulp mills, breweries.

Molson Coors, the last brewery plant in the area, closed in 2015. Now, the new owner of the site – developer Concord Pacific, which made its name in the past 30 years by building a forest of residential condos on the north side of False Creek – has created a hyper-futuristic plan to replace the buildings of vats, production lines and barrels.

Pending city approval to rezone the industrial land, which Concord purchased for $164.8-million, plans for the tech-oriented, campus-style complex reveal a blend of office space with residential condos, including meeting rooms for those who work from home. The atrium of the commercial office building can be used as an event space, for example, to hear visiting speakers, host mini-conventions or hold social mixers.

“The idea is that people can have a life-and-work lifestyle,” says Peter Webb, senior vice-president at Concord Pacific. “They can spin off each other’s activities and ideas.”

Local tech-industry insiders see the proposed concept as a welcome addition in Vancouver, where the tech sector has been expanding steadily – everything from Amazon.com Inc. and Hootsuite to gaming and cybersecurity software development – resulting, pre-pandemic, in one of the lowest office vacancy rates in North America.

With local universities turning out large numbers of graduates with tech skills, the region is considered a strong contender for tech business. As well, Canada is admitting many immigrants with tech skills into the country.

Unlike many older cities in Canada and the U.S., Vancouver lacks large swaths of abandoned industrial space. One exception is the vacated Molson Coors brewery site. Located on the edge of popular Kitsilano, which has beaches, an outdoor swimming pool, tennis courts and a cluster of trendy restaurants, the area is ideal to support the lifestyle of young tech employees. A walkway along False Creek and a converted bike lane at the south end of Burrard Bridge provide access to walking and biking.

Although some tech companies, notably Twitter and Google, have told employees they can work from home indefinitely, some industry insiders, including commercial brokers, say the tech office is not likely to disappear postpandemic.

“We’ve discovered that people can be very productive when they’re distributed,” says Jill Tipping, president of the B.C. Tech Association, “but to be creative, to generate new ideas, requires unscheduled interactions. So being in a campus with different companies around [is] quite appealing.”

Alain Rivère, associate vice-president with CBRE in Vancouver who specializes in tech leases, agrees that employers are moving away from thinking that employees can just work at home forever. “Tech companies were able to work better than expected at home, but many are now saying, ‘We really see the value of the office – we’re just going to do it differently.’”

It’s uncertain whether people really want to live that close to work, but based on the 10,000 condos Concorde manages, where people are already converting their buildings into co-working spaces, Mr. Webb is confident they do. The company’s U.K. project Marylebone Square, which is located next to a 600,000-square-foot Amazon office in London, also supports it. Quantum Park, he says, is the next level up because it incorporates office spaces, garden spaces, and interior courtyards for visiting speakers or small meet-ups, all in one development.

As the land is currently zoned for industrial purposes, the big question is what the city will allow on that site. To date, city planners have been non-committal about rezoning the area. Mr. Webb believes that industrial use alone won’t result in the type and number of jobs the city needs, whereas a development like Quantum could potentially accommodate thousands of people who can live and work there.

“Molson employed 250 people at its [peak employment],” he says. “This is an opportunity to create a lot of jobs for Vancouver.” 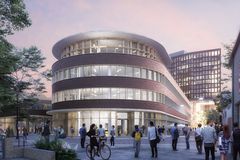 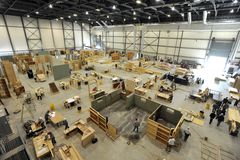 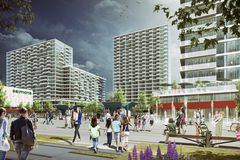