Truro has suffered the same plight as many other North American towns and cities: a mass exodus of shops and services to power centres on the perimeter. But in this Nova Scotia town, where the Bay of Fundy ebbs and flows and family farms still prosper in the nearby countryside, the tide has turned on the trend that is emptying downtown cores of their vibrancy.

It took the reimagining of one derelict 19th-century building – or in architectural speak, the “adaptive reuse” of it – in the heart of the downtown to kick-start a revival.

Once a liability with boarded-up windows, a leaky roof and a demolition date, the revitalized Normal College is now the lifeblood of the town, as a cutting-edge new library surrounded by a buzzing public square.

The town of Truro, population 12,000, lies about 100 kilometres north of Halifax almost exactly in the middle of the province. Starting in 1875, Truro boomed with the railroad and factories before the First World War, when trades were still an art. Today, its most famous factory – Stanfield’s underwear, creator of the legendary drop seat – is still a thriving manufacturer in the town.

It was during this prosperous time when the town’s stateliest building, the Normal College, was built in 1877 as Nova Scotia’s teacher training school.

But it fell on hard times, and in the early 1960s the building was haphazardly converted into a YMCA, and later, a boxing club. Except for its roosting pigeons, it had been vacant for years when the town of Truro began in 2014 to hunt for a site for a new library.

Eventually two locations were put forward: the old Normal College in the heart of the downtown, and a former hat factory on the west side, next to a grocery store and strip mall.

“There’s a civic precinct in this town and if you start taking some of those civic things out of there and demolishing, all of a sudden you’re left with a very nondescript kind of place. All of a sudden, it fizzles out and dies,” says principal Talbot Sweetapple.

Luckily for the building and preservationists, it didn’t.

After a raucous public debate – the librarians thought the building would be too divided into cells; the public wanted development on the west side and so on – residents finally came on board with the architects, and in late 2016, the provincially-registered heritage building opened its doors as the Truro branch of the Colchester-East Hants Public Library.

Architects use the term “adaptive reuse” to describe the repurposing of an old building for something other than it was built for, with a focus on sustainable design, reducing urban sprawl and preserving heritage buildings.

As a library, the Second Empire-style Normal College still has the same classic, grand centre entrance with 18-foot ceilings and light flooding through keystone arches, but also a modern box-like addition to blend new with old.

This modest add-on embodies MacKay-Lyons Sweetapple’s style that echoes the firm’s own Maritime roots and focuses on the surroundings and what’s appropriate as the main aspect of design. For example, in the addition, windows impart incredible views of the iconic Normal College in all its glory, especially when lit up at night.

“We actually used the existing building to be its own view,” says Mr. Sweetapple.

“When you’re in the backyard parking lot of the most monumental building in town, that’s the appropriate answer.”

Since the $7.8-million library opened in late 2016, more people and new businesses have flooded to the downtown.

Library membership has since doubled. The historic civic square in front of the Normal College was also restored, attracting crowds for concerts and skaters in the wintertime when it transforms into an outdoor rink. The square earned the No. 2 spot on Great Places in Canada’s 2017 list of best-loved public spaces.

Truro Mayor Bill Mills describes it as the town’s most treasured asset and a catalyst for change.

“There’s a new vibrancy downtown,” says Mr. Mills. “We had a reputation of being a very conservative town where nothing exciting ever happens and now that’s all changed.”

He points to events now held in the civic square and independent new businesses that have opened up in the downtown core, such as a bicycle store, a gourmet burger joint and a hand-printed apparel shop.

“Now we have a lot of young entrepreneurs who are coming up with magnificent ideas and they’re the ones who are really driving the downtown now,” he adds.

It’s also a project from which other small towns in the rest of the country can learn, suggests Mr. Sweetapple.

“You’ve got to revitalize and strengthen the heart of the downtown. If you move these institutions out of town and put them on the highway or out of the downtown, everything gets kind of weakened,” says Mr. Sweetapple.

“If they can learn a few lessons about reinvesting into their downtown cores and making sure they don’t die a slow death, it’s really important.”

Now, as you drive toward Truro, the main image of a train engine on the provincial highway signs has been replaced with the iconic Normal College.

“It has an elegance to it that speaks to a different time,” Mr. Mills says about the three-storey brick building with a mansard roof. “It’s important for us to know where we came from, to help us know where we should go.”

Otherwise, you may as well be in any big-box store parking lot.

Other Canadian examples of old buildings being renovated and repurposed:

This former turn-of-the-century tin lithography factory in downtown Toronto is now a restored arts and culture hub that’s home to more than 140 artists, shops and galleries.

An old sugar refinery abandoned for nearly 40 years has been transformed into a rock climbing centre inside 45-metre silos.

In its past life, this 350-seat bar and restaurant was a salt processing plant dating back to the 1930s. Before it became a restaurant, it was renovated as an athletes’ lounge for the 2010 Winter Olympics. 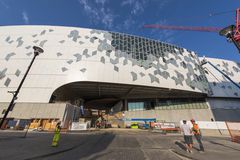