The Yonge Sheppard Centre in north Toronto was built in the 1970s as the quintessential suburban mall. Customers would arrive by car, park in one of its nearly 1,700 underground spaces and emerge on shopping floors where storefronts faced interior corridors. The few pedestrians who ever ventured along windowless walls on the sidewalks outside needed to walk up or down a flight of stairs to get into the mall.

Today, Yonge Street in the area is lined by a row of new restaurants and there’s easy street-level access to the mall via a welcoming atrium. It’s all part of a total rethink of the mall at the uptown intersection of two subway lines in an area that’s becoming increasingly urban.

“It was one of the first mixed-use centres in the city, combining residential, commercial and retail, but it was aging and the major tenant, a large Cineplex [cinema] in the middle, was leaving. We saw an opportunity to reimagine it,” says Andrew Duncan, senior vice-president of development for Toronto-based RioCan Real Estate Investment Trust, which, along with KingSett Capital, acquired the centre in 2011.

What turned out to be a nine-year project to rebuild and modernize the mall and two associated office towers is nearing completion, as a new 35-storey apartment tower rises at its northeast corner.

Attracting new anchor tenants, activating the streetscape, renovating the interior and creating naturally lit atriums were goals of a redesign conceived by Toronto’s Quadrangle Architects. “One of the biggest challenges was that it had no place where you were entering or exiting on the same grade as the street,” says Anna Madeira, executive principal for Quadrangle.

The two main retail floors were built a half level below or above the Yonge Street sidewalk. A moat-like gap around the building had been designed to let light in to the lower level, but it made access from the street extremely difficult.

The remake would require major surgery of a structure that was built out of extremely solid concrete. The former Cineplex movie theatre facility at the centre of the mall was demolished. In its place, a new core with two 50,000-square-foot floors on its second and third levels was built above a new loading dock at ground level that’s the size of a hockey arena.

The new tenants are LA Fitness, which has already opened on the second level, and a Longo’s supermarket, which is to open soon on the third floor. Both signed 30-year leases that let them specify features, which included 20-foot ceilings and, in the case of the fitness club, a lap pool and basketball court. A major expense was creating two double-depth freight elevators but they were necessary for deliveries to the market, Mr. Duncan says.

To bring the main mall entrance at the southwest corner to street level required slicing open the building and creating what Ms. Madeira describes as a well, along with opening the ceiling to create a skylighted arcade. Pedestrians can now enter the building at ground level, and in the three-storey deep well take a choice of escalator, elevator, stairs or ramps to reach the shopping levels. Because many of the building’s utilities formerly ran through sections of the concrete floors that were removed, an elevated walkway bridging the well also serves as a conduit for water and electrical lines.

The changes made it possible to cover over the exterior “moat” around the corner and Quadrangle’s design pulled the façade of the building back to create an overhang around the building and the sidewalks are now 10 metres wide along Yonge and Sheppard Avenue. New storefronts along the resulting promenade have attracted a row of restaurants on Yonge, bookended by two banks that stayed open through all the rebuilding. Even with hoardings still up on part of the block, there’s a marked increase in pedestrian traffic on Yonge, Ms. Madeira says.

The mall interior was dated and it needed to be modernized, she adds. Quadrangle’s design moved store facades back and removed concessions in the centre of aisles to create much wider corridors. Escalators were relocated to allow better circulation through the middle rather than along the edges of the corridors.

A food court grew from seven restaurants to a total of 14, the seating area was doubled and the range of menu options has broadened. “We wanted to invest in the food court to provide more attraction. It’s part of our effort to make the mall feel more urban. It’s busy here at lunch and dinner and much more active through the day,” Mr. Duncan says.

A major coup was attracting an outlet of Cactus Club Cafe, whose main restaurant is in the downtown financial district. The restaurant under construction on the second level of the Yonge-Sheppard corner will have glass walls that can open in warm weather to an outdoor patio overlooking the street.

The brokers for Cactus Club had scouted out several locations closer to the core and “initially they said Yonge and Sheppard may not work. They’re a very urban concept, not a suburban one,” says Jeff Ross, RioCan’s senior vice-president for leasing. “But I said, come guys, walk around the neighbourhood and see how the demographic is changing.”

It was a nearly two-year discussion. “These deals don’t come easily for a couple of reasons, including that the infrastructure involved in the buildout is quite complex and you have to make sure it will work," Mr. Ross says. "And the tenants themselves are much smarter than they ever have been in history. They do a lot more analysis of the demographics and the customer for each sale they are going to make, to understand if it will work in the long run.”

But ultimately, Cactus Club agreed the mix of residential, office and retail in the centre is increasingly urban and they wanted to sign on, Mr. Ross says.

When Cactus Club opens, expected in 2020, it will complete the mall redevelopment. The office towers flanking the retail expansion are also being reclad in a gunmetal grey composite aluminum material, increasing thermal efficiency and in the process removing the complex’s former Brutalist aesthetic.

The final stage of the revamp is the Pivot tower, designed by Quadrangle, rising 36 storeys with a total of 361 new rental apartments, due for completion in 2020.

All the work was scheduled in 14 stages to keep the mall open during the multiyear renovation. Most of the original tenants not only stayed, but also decided to upgrade their facades during the disruption. “RioCan set the guidelines for the materials and colours to ensure a consistency in the finishes, but we also wanted variety that you’ll see in the new storefronts.”

In some cases, stores closed temporarily and others moved to another location during construction, Mr. Duncan says.

To maintain the busy connections to the Toronto Transit Commission subway was a particular challenge. “We had to do work while passengers were coming and going and had to be able to shut the mall off after hours. It was a struggle for our construction manager to stage, but we worked through all the construction without having to obstruct access to the two subway lines.”

It was a long process, but seeing the final results is extremely satisfying, Mr. Duncan says. “We’re focusing on transit-oriented sites that have retail and the potential for additional uses like office and residential and can integrate with the community. So this checks every box for us. It’s exactly where we want to go to create a better portfolio.”

Yonge Sheppard Centre by the numbers 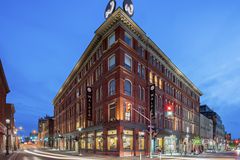 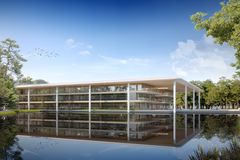 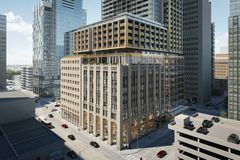 Real estate catches up with popularity of e-sports
August 26, 2019 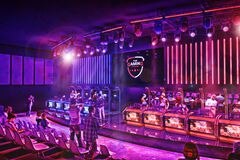