Shara Roy jumped at the chance to refresh the decor of the Bay Street offices of her law firm, Lenczner Slaght LLP. A partner in commercial litigation, she found the reception area – designed a quarter century ago – to be dark, dated and overtly masculine. Considering that some 40 per cent of the firm’s employees are women, it’s safe to assume that she probably wasn’t the only one who felt this way.

“It had very strong colours and lots of wood, and it was right for the time,” she says. “But the firm has changed in 27 years and we’ve gone from being a small boutique firm to an enterprise that has over 70 lawyers and more than 100 support staff.”

A chance at renewal

When the firm renewed and expanded its lease with Oxford Properties, taking over another floor in the building at Adelaide Street West and York Street, Ms. Roy became the lead planner for the much-needed update. In visiting other professional offices to survey design trends, she found that, while many accounting offices had gone to more open concepts, individual offices remained a staple in law firms to ensure client confidentiality.

The firm’s year-long rejuvenation project has become a journey of innovation that’s not only resulted in a brighter, more welcoming office, but has also incorporated thoughtful amenities for staff, including a prayer and meditation room and another room for nursing mothers.

Surveying the employees, it was clear they wanted to see more natural light and areas for collaboration.

“We found a lot of the younger lawyers were booking boardrooms to get together, so they didn’t feel so isolated in their offices,” Ms. Roy says. She also saw the need to brighten the reception area for clients. “We were going for a calming feel, because people come to us on some of their worst days. We guide corporations that are going under, CEOs who are facing a class-action suit and people facing removal from their professions. We wanted the space to feel welcoming and professional at the same time.”

Updating not recreating is key

The firm brought in Toronto-based interior designers, Bartlett & Associates, which advised them to update, rather than completely replace, the office features. “It’s always much easier to start from scratch than to reuse materials, but in this case, the elegant woods and stone in the office were just too good to discard,” Inger Bartlett, the design team’s president, says.

Instead, Ms. Bartlett recommended preserving much of the cherry wood detailing from the existing space and refreshing it with walnut features that would both contrast and complement the lighter wood. There were innovative options for opening up the previously dark, walled-in reception area to admit more natural light. As well, there was an opportunity to create a signature internal staircase to connect the three floors the firm now occupied. Previously, the only way to get from floor to floor had been by elevator.

Elsewhere, the renovation turned former offices into amenity spaces for lawyers and staff, including a gender-inclusive washroom, a private room for nursing mothers, a prayer and meditation room and a collaborative space for use by all members of the firm.

The design morphed into a blend of traditional and modern elements. “They were looking at branding and being seen as more progressive as they look to the future,” Ms. Bartlett says. “They also had to reflect the fact they are a top litigator in Canada and a lot of very high-profile people are clients coming into the office.”

A progression of natural materials keeps the aesthetic professional, yet different from other law firms, Ms. Bartlett says. For the elevator lobby wall, the firm chose coffee-hued Eramosa limestone from the Mississauga location of tile supplier, Ciot. The floor is porcelain tile that mimics the look of natural stone.

At the same time, there are deliberate touches of whimsy. For instance, the names on the conference rooms include the O.R., a space which is decorated with medical texts, as well as The Hangar and the Dining Room.

The transformation has not all been smooth sailing. Cutting an opening for the staircase required the relocation of an entire beam, and a dedicated structure had to be built to support the weight of a sculptural wood wall. The staircase also features dozens of handcrafted glass lamps made by Canadian lighting design company Bocci, each of which had to be connected individually from the ceiling.

Perhaps the most noticeable change was the removal of an entire wall adjacent to the reception area that had previously formed part of a large board room, necessary in order to open up the space to natural light and views of the city. Taking its place is a partition wall made by Montreal-based company, Skyfold, that accordions up into the ceiling, but can easily be lowered to create a soundproof confidential meeting space when needed. The segmented boardroom table can even be scaled to suit the size of the meeting taking place.

A new space on a seamless timeline

The project was tackled in multiple phases over the course of a year to allow work to carry on seamlessly at the firm. Ms. Bartlett worked closely with the contractors and with Lenczner Slaght stakeholders to create swing space and to schedule construction around the firm’s need to keep things running smoothly throughout.

“That became quite a complex dance working around individual staff schedules,” Ms. Bartlett says. “For instance, we couldn’t have the flooring ripped out of an office the same week its occupant was scheduled for the Supreme Court.” Although the public spaces are complete, work is continuing, with a lunchroom still to be added, and the firm is eyeing expansion to an additional floor in the near future.

Bartlett & Associates has won two prizes for this project. One is an American Society of Interior Designers 2019 Professional Design Award in the Large Commercial Interiors category. The second, in the Outside-the-Box category, was awarded for the Bocci lighting installation and sculptural wall feature.

Ms. Roy was also recently honoured by being named one of the Top 25 Most Influential lawyers of 2019 by Canadian Lawyer magazine. This past spring, she and fellow lawyer Sana Halwani launched a unique initiative called ReferToHer, a database listing of qualified female legal specialists that will be updated periodically, with the goal of increasing referrals to women throughout Canada.

“We found from individual experience and research that, in referral work, which is the lifeblood of private practice lawyers, both women and men tend to refer work to men,” she says. “We did not want to disenfranchise male partners, but to make sure that top female litigators are considered at the same time as their male counterparts.”

Ms. Roy is still contemplating a number of other changes for the office. “I would like to upgrade our prayer space to make it more calming than it is now. (Currently it’s a 10-foot by 12-foot former office that is carpeted but boasts a view.) I also think we need to get away from the typical law firm mounds of paper. Large areas of our space are taken up by copiers and filing cabinets. I see that all changing to electronic storage over the next five years, which will free up more space.”

All the work completed so far has been supported enthusiastically by the staff, Ms. Roy says. “I’m receiving emails from staff members saying how proud they feel to work in a place that puts this much effort into how we live at work. We spend a lot of time here and it’s gratifying to hear that kind of feedback.” 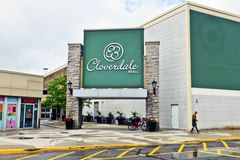 Private clubs in Canada are letting go of old-school rules and turning their spaces into modern places for business
October 1, 2019 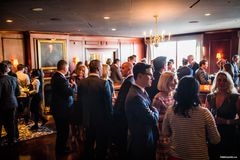 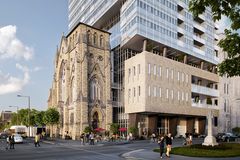