It’s lights, cameras and action – everywhere. While just a few months ago, it appeared COVID-19 was forcing a wrap for the film industry, there’s now so much demand for production space that studios are expanding, and new ones are being built in all corners of the Greater Toronto Area.

“What the pandemic did was force a pause in production, but we have not altered course on our expansion plans,” says Geoff Grant, general manager of Pinewood Toronto Studios, which is majority owned by Bell Media. Studio clients aren’t changing their plans either; “We’re bursting at the seams and turning away viable productions because of the lack of space available.”

Pinewood’s complex on Toronto’s Port Lands currently has 11 stages, including Megastage, the second largest in North America, which, at 46,000 square feet, can accommodate sets as tall as five storeys. In November, Pinewood broke ground on an expansion that will add five more stages by early 2022, along with craft workshops in a project built by Ledcor Group of Companies and managed by Turner & Townsend.

Pinewood is one of several production centres located in Toronto’s Port Lands, a redevelopment zone east of the city core. A pioneer in the Port Lands, Cinespace Film Studios is expanding with an additional 165,000 square feet of production space.

To the east of the Pinewood complex, a big site on Basin Street is about to add to the Port Lands creative cluster. City of Toronto’s real estate agency, CreateTO, has invited proposals to build studios on an 8.9-acre former industrial site, renamed Basin Media Hub, that could include up to 500,000 square feet of creative spaces.

According to Vic Gupta, senior vice-president of strategic development for CreateTO, “Hollywood is coming north [because] we’ve got the facilities and a skilled work force that’s world class,” along with a supportive film office that makes it easy to get permits around the city. Another advantage is Port Lands’ proximity to diverse locations throughout Toronto that can stand in for almost any city in North America.

Many studios are developed in retrofitted warehouses, but increasingly stages are being purpose-built to create height for hanging equipment and obstruction-free space within the building, Mr. Gupta says.

The city has developed renderings of Basin Media Hub, but they are tentative. The successful bidders will design and build their own facilities, with the land remaining city-owned on long-term leases, Mr. Gupta says. “There could be multiple tenants; we’re leaving this up to the industry.”

“We’re looking for proposals with a sense of design and sustainability,” he adds. “When fully developed, [Basin Media Hub] will be a destination not only for the industry but for the public.” A waterfront promenade with public access along the edge of Lake Ontario is a requirement of the development.

And it’s not just the Port Lands where studio capacity is expanding.

The Cantay facility is also close to another new TV and film production hub in Mississauga, CBS Stages Canada, which opened in 2019. The 260,000-square-foot complex on Matheson Boulevard East, near Dixie Road, features six soundstages, production offices and support facilities.

And in addition to expanding in the Port Lands, Cinespace has developed the 50,000-square-foot Titan Studios as part of a multi-year expansion of its Kipling Campus in Etobicoke, west of the city core, where The Handmaid’s Tale and Netflix’s superhero series Titans were filmed.

“The industry is alive and well in Toronto,” Mr. Gupta says. According to the Toronto Economic Development agency, it provided more than 44,000 jobs in the Toronto area and pumped more than $2-billion into the local economy in 2019.

“While everyone has had to take a deep breath for a while, everybody is very optimistic about the future.”

Hamilton gets ready for its closeup

As soon as Aeon Studio Group announced plans to convert a former manufacturing plant in Hamilton into production studios, they were getting calls from prospective tenants.

“While there are 900 film-related businesses and 9,000 people employed in production in Hamilton, until now there has not been a real film studio facility in the city,” says Jeff Anders, a co-founder of Aeon, which has a master plan to build Hamilton into an international hub for film, television and digital media production.

The company took over the former manufacturing plant on Queen Street North the first week of December and is aiming to have it open as Aeon Bayfront Studios by Feb. 1. The building’s former owner, power equipment maker AVL Manufacturing Inc., is moving to a new location in the Hamilton area.

The studio will feature a 27,000-square-foot clear-span mainstage with a 50-foot ceiling, 40,000 square feet of additional production space of varying ceiling heights and 6,500 square feet of furnished offices. In addition, there are four acres of outdoor space suitable for backlot uses, as well as a paint shop with two paint booths.

“We looked at several other buildings over the past three years and they were not nearly as good as this one,” says Mr. Anders. The modern building will get additional soundproofing and electrical upgrades, but it is in exceptional condition, he adds.

The studio is located across the street from the Barton-Tiffany lands, a city redevelopment site of former industrial sites in the north end of Hamilton. Aeon has longer-term plans to build on a 15-acre parcel it calls the Hamilton Studio District, a hub for the creative industries, which will feature studios, offices, retail and residential space. Aeon’s real estate partner is Forge & Foster, a Hamilton-based investment firm.

“Hamilton is getting busier and busier because you can make it look like anywhere and the locals love us,” comments Robbie David, an Aeon co-founder who has been producing films in Hamilton for many years. As part of its services, Aeon also launched a location representation service, which helps productions find unique filming locations in the Hamilton area and arrange with property owners to offer their spaces up for rent for film and TV productions.

“Hamilton is a top 10 Canadian city, but it’s not huge, so within a small radius you have locations that look like Chicago or New York; you have suburbia, the post-apocalyptic Stelco complex and the Niagara Escarpment within a 10-minute drive,” Mr. David says. “You can literally set up to shoot in an industrial setting and a forest in the same day.” 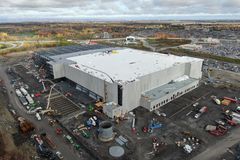 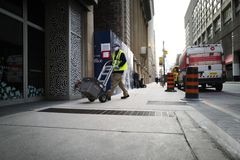 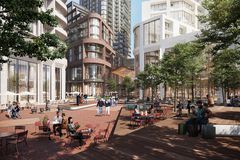