Public library buildings are safe shelters and economic drivers that quietly operate within every community. They live in the bricks-and-mortar space as well as the virtual, assisting patrons with such life basics as finding employment, starting their own businesses and teaching their kids to read.

During the pandemic, libraries had to close their buildings to the general book-reading public, but facilities were used in different ways, for example, as food bank distribution centres and emergency computer labs for low-income groups. In recent weeks, they have slowly started to reopen, with a renewed understanding of the unique and essential role libraries play within the physical community.

According to Mary Rowe, president and chief executive of the Canadian Urban Institute (CUI), the uncertain times brought into focus the new reality that the library is another kind of frontline commons.

“In a contemporary city, the built environment consists of various kinds of facilities that function as anchors,” she says, “and during this pandemic that’s become clear.”

In April, the CUI held a special pandemic panel discussion on how these city-building institutions were adjusting to the lockdown and preparing to reopen. Going forward, Ms. Rowe says, they will play an essential role in restoring the economy.

“A library is as much an economic service as anything else,” she says. “To have an economy that functions, you need people who are healthy and able to contribute and who have the skills and resources to participate.”

As life gets more difficult for people who’ve become unemployed or homeless, equal access to library spaces and resources is taking on a more profound meaning. Demand for online library services has skyrocketed across the country, with expanded online programming and e-book spending. The Ottawa library system – which had lent out more than half a million materials at the onset of the pandemic – saw an increase in temporary cardholders of 5,000 during lockdown, and in Halifax, cardholders grew by 6,000.

This month, Halifax Public Libraries re-opened the last of its branches, and members of the public were waiting.

“I happened to be at our central library when they unlocked the door to open, and among the first people in was a young kid who said he woke up at 6:45 that morning because he couldn’t wait,” says Asa Kachan, chief librarian.

“I think of my job as a bit more entrepreneurial than it might have been 20 or 30 years ago, but I also feel like we are in a bit of a renaissance, and people are increasingly recognizing the pivotal role that the library plays.”

Christina de Castell, the chief librarian at the Vancouver Public Library, says more than 3,000 people have signed up online for new Vancouver library cards since March and there has been an 80-per-cent increase in the use of e-books.

“In a recession or an economic downturn, we see much higher use of libraries historically, when people are struggling with money,” she says. “That’s the time they discover everything that libraries have to offer.”

There is also a renewed appreciation of the key role that libraries provide for people who don’t have the internet, or who live in cramped rooms and do not have the luxury of space. To narrow the digital divide – 15 per cent of patrons are without internet access, Ms. de Castell says – the central library created a temporary eight-station computer lab in a large meeting room to serve those who don’t have computers or printers. The branch, which is within walking distance to the downtown eastside, also made a special allowance to reopen its washroom facility for those with no other access. Recently, the VPL reopened five of their 21 branches, with safety restrictions.

Although the core mandate is still information-sharing, library staff members also do training on how to be empathetic to vulnerable people and are often involved with outreach work, meeting with daycares in inner-city neighbourhoods to help kids obtain literacy skills or delivering library materials to care homes.

Library professionals point to cuts in government health and social services over the years as the reason for the broadening mandate.

“The reductions in funding for certain programs, whether mental health, legal aid or other forms of social support, has shifted people into libraries, so we now provide a lot more services than we did 20 years ago,” Ms. de Castell says.

Eric Klinenberg, a professor of sociology at New York University, has written about the crucial role of social infrastructure, such as libraries. In an article published by The New York Times in 2018, he wrote that despite the fact that libraries are overwhelmed with a growing need, they are starved for resources.

Part of the challenge, he argues, is that the principle that all people are deserving of free access is out of sync with the current market-dominated world order. As well, he points out that few people of influence understand the broad role of the modern library at the community level.

“Libraries are being disparaged and neglected at precisely the moment when they are most valued and necessary,” he wrote.

There’s also the question of land use. Because libraries have proved so successful in the virtual realm, some people question the value of using up so much real estate. With high land prices in major cities, libraries – like any other bricks-and-mortar establishments disrupted by technology – need to justify the square footage.

Ottawa Public Library CEO Danielle McDonald doesn’t rule out change, such as increased online use, but says the need for a “community living room” is also stronger than ever.

She sees the library evolving even more into a physical and virtual hybrid. The Ottawa Public Library covers the biggest geographic region in the country, with 650 staff, 33 branches, two bookmobiles and a budget of more than $50-million. Like many public libraries, they get a lot of value out of the budget they have, funded largely by the city with some funding from the province.

“When you look at historical patterns of plagues and different [crises], we come back to use our spaces … because we are social beings,” Ms. McDonald says. “As we intensify urban areas, people need a space where they can go.”

Andy Yan, urban planner and director of the City Program at Simon Fraser University, is concerned that libraries could face even more government funding cuts, in spite of the fact that libraries have been shown to develop communities. In his former job, Mr. Yan worked alongside renown B.C. architect Bing Thom, who designed the Surrey City Centre Library. Mr. Yan recalls that just the announcement of the now iconic structure was so exciting to developers, it was instrumental in helping to grow the municipality.

“I hope [funding bodies] remember that libraries may not directly generate revenue,” he says, “but they can help an immigrant learn English or give somebody the resources to find a job or start a business.” 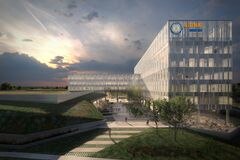 York University puts a twist on its newest building
July 7, 2020 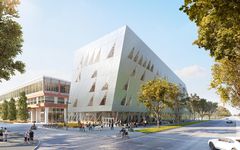