A day at the spa is the kind of relaxation and self-pampering we’re all going to crave once this era of uncertain isolation has passed. And when the all-clear comes, an innovative spa system is pointing to a way to reuse former movie houses into indoor spas.

A vast new pool and spa complex has created a new life for the former Cineplex Odeon First Markham Place in suburban Toronto. The 68,000-square-foot theatre complex at Highway 7 near Warden Avenue had been sitting empty for years after screenings moved to the Cineplex Cinemas Downtown Markham and VIP that opened in spring of 2015.

It’s part of a trend to finding innovative new uses for former movie theatres that are becoming redundant in a streaming world. Creative adaptations of former cinemas in Canada include churches, drug stores and cannabis dispensaries.

In Montreal, the art deco landmark Snowdon Theatre, on Decarie Boulevard, is being converted into a 55-unit condominium. After it closed in the mid-1980s, the Snowdon had been divided into two floors and rented to shops and a gym, but it sat empty since 2013 before developer Théâtre Snowdon Condominiums purchased the site. The iconic marquee and lobby are being restored as part of the project.

In Vancouver, the Hollywood Theatre on West Broadway in Kitsilano, which closed in 2011, is being restored including its neon signage and clock as part of a six-storey mixed-use development built by 4184 Investments Ltd. Part of the development plan is the restoration of the 1935 art deco theatre into a state-of-the-art performing arts centre.

In Toronto, the heritage-listed Eglinton Theatre built in 1937 became the Eglinton Grand, an event venue, its balcony becoming a floor for trade shows. The 1948-vintage Donlands Theatre was repurposed as a recording studio. The former Brighton Theatre on Roncesvalles Avenue became a convenience store.

However, the interiors of many theatres have proved so impractical to repurpose that the buildings have either been simply demolished or gutted to retain just their decorative outer skins. The University Theatre on Toronto’s Bloor Street, once the largest movie house in Canada, suffered that fate, eliminating everything except its distinctive marquee and limestone front wall that became the entrance to a new store.

The biggest constraint in reuse of theatres has been that they were built with banked floors and risers to accommodate seating with sightlines to a stage or screen. Levelling the floors requires costly demolition and reconstruction. At First Markham Place, the impracticality of tearing apart the floors of the cinemas that covered a large expanse of the third level of the mall had seen the complex sit empty for nearly four years.

The owners of Go Place Spa came up with idea of creating an Asian-style completely indoor thermal spa with a total of seven pools and a focus on water therapy. At the Markham Cineplex, there was a nine-foot difference between front and rear of the floor, says Brian Hu, president of H&L Bilateral Design Inc. in Markham, the general contractor.

To level the floor required building a second floor consisting of a metal deck topped with concrete.

That created new challenges, says Melissa Brown of Markham-based BonaVista Pools, which was hired to install the seven spa pools. “The original design specified stainless steel spas and not only are they expensive, the logistics of getting them up to the site would require serious alterations to the building in order to crane-lift the structures into the building,” Ms. Brown says.

The most critical issue was weight. “Because we are experienced with shotcrete pool construction, we priced the spas as concrete features and made a note for the owner and contractor to confirm that the building structure could carry the weight. Then just as we were ready to begin the project in August, 2018, the engineer for the project told us that even though extra support was added under the spa area, the building’s structure would not carry the load.”

That forced a rethink. Having attended spa trade shows in Europe to find products that are not available in the North American market, Ms. Brown contacted Preformati Italia. The Italian manufacturer builds pool and spa structures from expanded polystyrene – a rigid, lightweight, but high-strength-foam expanded material that’s nearly 20 times lighter than the equivalent volume of concrete.

Preformati Italia offered designs that can be laser-cut with beautiful curves that would be difficult to do in concrete. “It made the pools sexier in a sense and that got me hooked,” she says. The expanded polystyrene foam is formed in big blocks in a mold and then cut to shape before shipping. Fabrication and shipping to Montreal required about five months and it was trucked from there to the mall.

Access to the building site was also solved by the modular approach. At the site there was a pulley lift that pulled the pieces three flights up a block at a time. The foam made each piece light enough that it could be shifted into place by one person.

“We got it in dozens of pieces. I was on the site for two weeks putting it together and it was fun; like building real-life giant 3-D jigsaw puzzles. We had to put adhesive between the joints and cement underneath them and fit them all together,” Ms. Brown says. The whole assembly process took only 10 days.

While that was going on, other crews connected miles of plumbing in crawl spaces beneath the pools. The voids around the plumbing were filled with expanded foam and allowed to cure.

The condensation created from seven indoor pools was another issue that needed innovation, as spas of this size are typically outdoors, where ventilation is not a concern. The ventilation system had to be upgraded and humidifiers were installed on the roof above the spa, Mr. Hu says. The walls were finished in wood-grained vinyl panels in finishes including some that resemble real wood. “They resist humidity and are easy to keep clean,” he adds. The interiors of the saunas resemble cut jade and there’s a salt sauna that features blocks of real salt.

While the project was more than a year in planning, the final installation took just six weeks to complete, and in November, 2019, it was ready for filling and start-up of the systems.

“It was the first time I’ve ever seen this done in an old theatre, but it’s not destined to be the last,” Ms. Brown predicts. “There are so many places that we could do things like this in old theatres, stores and rooftops.”

The modular Styrofoam approach is also a potential solution for indoor home installations, if going out stays off the menu for an extended period, she adds. “We’re lucky to be in an industry where we can help people enjoy their lives a bit more no matter what happens.” 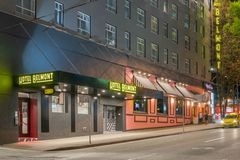 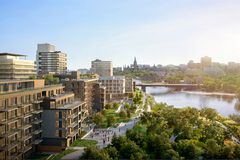 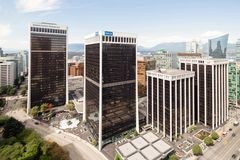