The country’s largest utility has long vowed to change its reckless ways. After leaving a trail of death and destruction through Northern California from wildfires sparked by its equipment, Pacific Gas & Electric ’s fifth chief executive in less than three years is again pledging that the future will get “easier” and “brighter.”

But those promises made by CEO Patricia “Patti” Poppe in her first letter to shareholders are ringing hollow a year after PG&E emerged from one of the most complex bankruptcy cases in U.S. history, an act of desperation driven by a succession of harrowing wildfires ignited by its long-neglected electrical grid.

The bankruptcy, PG&E’s second in less than 20 years, was billed as an opportunity for a utility that provides power to 16 million people – a population greater than all but a handful of states – to finally hit the reset button.

So far, however, it has looked more like a reminder of problems that have resulted in tragedy after tragedy the past six years, including a 2018 wildfire that killed 85 people and destroyed the town of Paradise, about 170 miles (274 kilometres) northeast of San Francisco.

Already a twice-convicted felon, PG&E has been charged with another round of fire-related crimes that it denies committing. The utility also has been rebuked by California regulators and a federal judge overseeing its criminal probation for breaking promises to reduce the dangers posed by trees near its power lines.

And most of the roughly 70,000 victims who have filed claims for devastation caused by PG&E’s past misdeeds are still awaiting payment from a US$13.5-billion trust created during the bankruptcy. The trust is facing a nearly US$2-billion shortfall because half its funding came in company stock, despite critics saying it was foolhardy to hold a stake in a utility with such a shoddy record.

Those shares have been sagging in a soaring stock market. A windfall could still come if PG&E’s shares rebound as several analysts have projected, but the trust would find itself in an even deeper hole if the stock should fall even further.

There are legitimate worries about the shares plunging if the utility sparks another deadly wildfire during the next four months, with most of PG&E’s sprawling service territory mired in extreme drought and climate change contributing to worsening fire conditions in the U.S. West.

“Of course, I am nervous. My biggest fear is what is going to happen to the stock,” said John Trotter, head of the wildfire victims’ trust, which owns nearly one in every four PG&E shares – far more than any other investor.

Mr. Trotter, a retired federal judge who is being paid US$1,500 an hour as the trustee, has other headaches, too. He and over 300 workers have come under heavy criticism for the slow pace of payments to victims who lost family, homes and other property anywhere from nearly three to six years ago.

During its first six months of operation last year, the trust doled out just US$7.2-million to victims while running up nearly US$39-million in operating expenses that reduced the amount available to be paid out, according to its financial records.

“I look at it like a locomotive, starting slowly, but we’re puffing out the steam now and we are starting to roll now,” Mr. Trotter told the Associated Press in an interview. “I just wish I had a magic wand and could make it go more quickly, but I can’t. We are doing everything we can.”

Mr. Trotter said he has a plan for eventually selling the stock without having to pay taxes on potential gains but wouldn’t disclose his target price. The shares, which have recently been hovering around US$10, will need to rise to about US$14 a share for the trust to reach US$13.5-billion.

Wall Street analysts project that PG&E’s stock could reach US$13 to US$17 during the next 12 months, which would mark a dramatic turnaround. The shares have dropped by 17 per cent so far this year, while the S&P 500 has climbed by 14 per cent.

The trust has been making some progress. As of June 30, it had paid out US$436.4-million. That is still just 3.2 per cent of the US$13.5-billion that was supposed to be earmarked for fire victims, a sign of “designed dysfunction” built into the utility’s bankruptcy settlements, said Will Abrams, a victim of a PG&E-caused wildfire that terrorized his hometown of Santa Rosa, California, in 2017.

“I have been really disappointed,” Mr. Abrams said. “The bankruptcy was sold as something that was going to hold PG&E to account, and it was not. Bankruptcy is not a process to reorganize. It is a process to divide up the dollars.”

But nearly 45,000 victims voted for the plan, with only 6,109 opposed, according to court documents, clearing the way for its approval by U.S. Bankruptcy Judge Dennis Montali.

Many victims were swayed by lawyers who participated in settlement negotiations and argued that the plan was the best option. Eight of those lawyers are now part of a nine-person oversight committee for the victims’ trust, an arrangement that Mr. Abrams believes is a conflict of interest.

Amy Bach, the only member of the trust oversight committee who wasn’t involved in the PG&E bankruptcy negotiations, insists everyone is trying to ensure all the wildfire victims get as much money as quickly as possible. The lawyers involved are motivated to make that happen, she said, because their fees are contingent on their clients getting paid.

“We have kept as much pressure as we can on the claim reviewing team,” said Ms. Bach, executive director for United Policyholders, a non-profit group she formed nearly 30 years ago to fight insurers on behalf of fire victims. “They seem to be hearing us, it feels like things are speeding up.”

Frank Pitre, another member of the oversight committee and one of the lawyers who has been representing fire victims, acknowledged that things have been moving slower than he hoped. That’s one of the reasons he gives Mr. Trotter and his team a “B” grade for their efforts so far.

“There is a lot of room for improvement,” Mr. Pitre said, but added that “there is no doubt in my mind that the effort is there.”

PG&E believes it has already done its part to help fire victims.

“We funded the trust in accordance with our plan of reorganization,” the utility said in a statement to the AP. “PG&E is not involved in distributing trust funds.”

While PG&E hasn’t lived up to expectations, Mr. Singh said, “I am very encouraged with new leadership, [a] new playbook, rigour and discipline that we are on the right track. We know we can do better and we will do better.”

Mr. Trotter, meanwhile, is holding his breath as the weather heats up and the landscape in Northern California dries out. 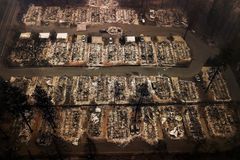 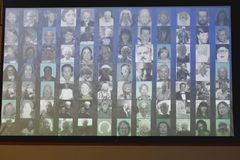 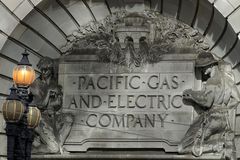