The U.S. job market roared back to life in March – and with vaccinations accelerating, businesses reopening and federal aid flowing, the rebound should only get stronger from here.

U.S. employers added 916,000 jobs last month, twice as many as in February and the most since August, the Labor Department said Friday. The unemployment rate fell to 6%, its lowest level since the coronavirus pandemic began, and nearly 350,000 people rejoined the labor force.

The data was collected early in the month, before most states broadened vaccine access and before most Americans began receiving $1,400 checks as part of the latest federal relief package. It was also before the recent rise in virus cases, which economists warned could slow the recovery if it worsened. But on balance, forecasters are optimistic that hiring will remain strong in coming months.

President Joe Biden, speaking at the White House on Friday, hailed the report as evidence that both his economic and public health initiatives are bearing fruit.

“My message to the American people is this,” he said. “Help is here, opportunity is coming, and at long last there is hope for so many families.”

Biden said the report was also a reminder of the deep hole created by the pandemic. The United States still has 8.4 million fewer jobs than in February 2020. Even if employers kept hiring at the pace they did in March, it would take months to fill the gap.

And if the increase in coronavirus cases turns into a full-blown new wave of infections, it could force some states to reimpose restrictions, impeding the recovery.

But few economists expect a repeat of the winter, when a spike in COVID-19 cases pushed the recovery into reverse. More than a quarter of U.S. adults have received at least one dose of a coronavirus vaccine, and more than 2 million people a day are being inoculated.

“This time is different and that’s because of vaccines,” said Julia Pollak, a labor economist at the job site ZipRecruiter. “It’s real this time.”

More than 4 million people have been out of work for more than six months, a number that continued rising in March. Millions more are out of the labor force entirely – with people who are not looking for work factored in, the unemployment rate would be above 9%. And the rebound has been uneven: The unemployment rate among Asians rose nearly a point in March, while Black workers have seen slower job gains than other groups.

“What we need is an acceleration of the vaccinations and an acceleration of hiring,” said William E. Spriggs, a Howard University professor and the chief economist for the AFL-CIO. “We need that to give confidence to the people that have been sitting on the sidelines.”

There are signs that is already happening. Nearly half a million women joined the labor force in March, which economists attributed in part to the return of in-person schooling in much of the country.

“You open schools, and imagine what happens – women return to the workforce,” said Diane Swonk, chief economist for the accounting firm Grant Thornton.

Job gains in March were broad based. The leisure and hospitality sector added 280,000 jobs as Americans returned to restaurants and resorts in greater numbers, and construction businesses added 110,000 as activity resumed after winter storms in February. Schools, both public and private, added 190,000 jobs in March.

But retailers, manufacturers and transportation companies added jobs as well, which Swonk said showed that the recovery was being driven by more than just the reopening of shuttered businesses. Government aid has given Americans money to spend and the confidence to spend it.

Businesses, too, appear to be growing more confident. Many of the jobs added in January and February were temporary positions, but in March, temporary staffing levels were essentially flat, indicating companies were filling permanent positions instead.

Amy Glaser, senior vice president at the staffing firm Adecco, said that in recent weeks, a growing share of her clients had been looking for permanent employees, or converting temporary hires into permanent ones.

“Our conversations have really shifted even over the last six weeks,” she said. “We spent the last year doing a lot of worst-case-scenario planning with our clients, and now the conversation is the opposite: How do we capture the rebound to make the most effective use of it?”

Businesses have good reason to be optimistic. Even before the latest round of stimulus checks, Americans had $1 trillion more in savings than before the pandemic – money they could now begin spending on restaurant meals, vacations and concert tickets.

“They have the money in the bank, they’re ready to spend it, but what was holding them back was not having a comfort about being able to go out,” said Jay Bryson, chief economist for Wells Fargo. “We’re getting into a critical mass of people that are feeling comfortable beginning to go out again.” 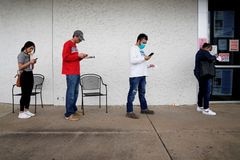 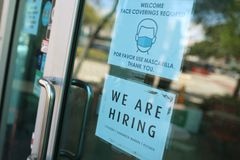 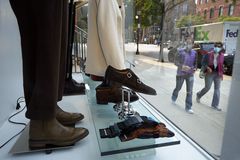