Parler, a social network that pitches itself as a “free speech” alternative to Twitter and Facebook, is suffering from whiplash.

Over the past several months, Parler has become one of the fastest-growing apps in the United States. Millions of President Donald Trump’s supporters have flocked to it as Facebook and Twitter increasingly cracked down on posts that spread misinformation and incited violence, including muzzling Mr. Trump by removing his accounts this past week. By Saturday morning, Apple listed Parler as the No. 1 free app for its iPhones.

But, by Saturday night, Parler was fighting for its life.

First, Apple and Google removed the app from their app stores because they said it had not sufficiently policed its users’ posts, allowing too many that encouraged violence and crime. Then, late Saturday, Amazon told Parler it would boot the company from its web-hosting service Sunday night because of repeated violations of Amazon’s rules.

Amazon’s move meant that Parler’s entire platform would soon go offline unless it was able to find a new hosting service Sunday.

“Big tech really wants to kill competition,” John Matze, Parler’s chief executive officer, said in a text message. “And I have a lot of work to do in the next 24 hours to make sure everyone’s data is not permanently deleted off the internet.”

In a statement online, Mr. Matze added that the tech giants had acted in a “co-ordinated effort” to “completely remove free speech off the internet.” Parler, he said, would probably be unavailable on the internet for up to a week, starting at midnight Sunday. But, he went on, the company had “prepared” by not relying on Amazon’s proprietary infrastructure and was looking for a new hosting provider.

A day earlier, Parler appeared poised to capitalize on growing anger at Silicon Valley in conservative circles and was even a logical choice to become Mr. Trump’s next megaphone after he was kicked off Twitter. Now its future is looking bleak.

In a letter to Parler on Saturday, Amazon said that it had sent the company 98 examples of posts on its site that encouraged violence and that many remained active. “It’s clear that Parler does not have an effective process to comply with” Amazon’s rules, the company said in the letter. Amazon “provides technology and services to customers across the political spectrum, and we continue to respect Parler’s right to determine for itself what content it will allow on its site. However, we cannot provide services to a customer that is unable to effectively identify and remove content that encourages or incites violence against others.”

On Friday, Apple gave Parler 24 hours to clean up its app or face removal from its App Store. Parler appeared to take down some posts over that period, but Saturday, Apple told the company its measures were inadequate. “We have always supported diverse points of view being represented on the App Store, but there is no place on our platform for threats of violence and illegal activity,” Apple said in a statement.

Mr. Matze pointed to the fact that Twitter had recently promoted the phrase “Hang Mike Pence” as a trending topic. (The majority of the discussion on Twitter was about rioters chanting the phrase about the U.S. Vice-President Wednesday.) “I have seen no evidence Apple is going after them,” Mr. Matze said. “This would appear to be an unfair double standard as every other social media site has the same issues, arguably on a worse scale.”

The actions against Parler were part of a wider crackdown by tech companies on Mr. Trump and some of his most extreme supporters after Wednesday’s deadly riot in Washington. But unlike Twitter and Facebook, which make decisions about the content that appears on their own sites, Amazon, Apple and Google weighed in on how another company was operating.

Amazon Web Services supports a large share of the websites and apps across the internet, while Apple and Google make the operating systems that back nearly all of the world’s smartphones. Now that the companies have made it clear that they will take action against sites and apps that don’t sufficiently police what their users post, it could have significant side effects.

Several upstarts have courted Mr. Trump’s supporters with promises of “unbiased” and “free speech” social networks, which have proved to be, in effect, free-for-all digital town squares where users hardly have to worry about getting banned for spreading conspiracy theories, making threats or posting hate speech. The tougher enforcement from the tech companies could preclude such apps from becoming realistic alternatives to the mainstream social networks. They now face the choice of either stepping up their policing of posts – undercutting their main feature in the process – or losing their ability to reach a wide audience.

That may reinforce the primacy of the social-media incumbents, Facebook, Twitter and Instagram. It also gives those companies’ decisions more teeth. If they ban a pundit for violating their rules, that person will lack a strong alternative.

Amazon, Apple and Google’s moves could also spur other apps to strengthen their enforcement.

DLive, a livestreaming site that rioters storming the Capitol used to broadcast the moment, said Friday that it had indefinitely suspended seven channels and permanently removed more than 100 previous broadcasts of the mob. It added that the “lemons,” a DLive currency that can be converted into real money, sent to the suspended channels would be refunded to donors in the next few days.

Other platforms that host posts by right-wing influencers, including CloutHub and MyMilitia – a forum for militia groups – adjusted their terms of service recently to ban threats of violence.

DLive was pressed by Tipalti, a payment company that helps it operate. Tipalti said in a statement that it had suspended its service until DLive removed the accounts that had broadcast the riots Wednesday.

Such third-party companies that help apps and websites function, from payment processors to cybersecurity firms to web-hosting providers such as Amazon, have used their positions to influence how their customers handle extremist or criminal activity. In 2019, Cloudflare, a company that protects sites from cyberattacks, effectively delivered the death knell to 8chan, an anonymous online message board that hosted the manifesto of a mass shooter, by halting its protections for the site. After Cloudflare backed away from 8chan, the site struggled to find other service providers that could keep it active.

Parler could have the same problem now that it lacked a way to host its website, particularly as the company suddenly became a pariah after Wednesday’s riot, which was partially planned on Parler. Amazon had faced pressure from its own employees and at least one member of Congress before it pulled its support for Parler, and other companies could fear unwanted attention if they took its business.

If Parler is able to find a provider and resume its service, it will still have an uphill journey to find new users without a place in the major app stores. Apple’s decision blocks iPhone owners from downloading the Parler app. People who already have the app will still be able to use it – if it comes back online – but their versions of the app will soon become obsolete as Apple updates the iPhone software.

Google cut Parler out of its flagship Android app store, but it also allows apps to be downloaded from elsewhere, meaning Android users would still be able to find the Parler app, just with a bit more work. If Parler finds a new web-hosting provider, its website would also be available via web browsers on phones and computers.

After Apple had given the company 24 hours to improve its moderation to avoid removal from the App Store, it appeared that Parler had tried to remove some posts that seemed to call for violence.

For instance, L. Lin Wood, a lawyer who had sued to overturn Mr. Trump’s election loss, posted on Parler on Thursday morning, “Get the firing squad ready. Pence goes FIRST.” The post was viewed at least 788,000 times, according to a screenshot on the Internet Archive. By Saturday morning, the post had been removed.

In a text message, Mr. Matze said the post had been removed “in compliance with Parler’s terms of service and rules against incitement of violence.”

In a notice to Parler on Saturday, Apple said that it had “continued to find direct threats of violence and calls to incite lawless action” on the app. Apple told the company its app would not be allowed on the App Store until “you have demonstrated your ability to effectively moderate and filter the dangerous and harmful content on your service.”

In an interview, Jeffrey Wernick, Parler’s chief operating officer, blamed “a cancel culture” at the tech companies for his company’s dimming prospects. He said he would advise other platforms not to try to compete on Apple’s App Store. “Because if you raise money and get investors and end up like Parler, what’s the point?” he said. 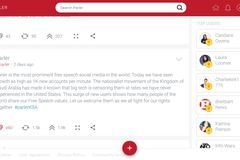