Apple Inc. is opening its iPhone repair network to mom-and-pop shops amid mounting pressure on electronics manufacturers to make it easier for consumers to fix their devices.

The announcement also comes at a time when Apple’s iPhone sales are slowing, driven largely by the U.S. trade war with China. As consumers have begun to hold onto their phones for longer, the smartphone giant is increasingly relying on other lines of business for revenue growth such as subscription services and iPhone accessories.

But while Apple said it plans to dramatically expand the types of repair shops that can access original iPhone parts and Apple service manuals, the company stopped short of making it easier for consumers to try their own phone repairs.

Apple officials said that starting Thursday independent repair shops will be able to access the same tools as Apple’s network of 5,000 global Apple Authorized Service Providers – which include major retailers such as Best Buy – so long as they have at least one technician on staff that has completed Apple’s 40-hour repair training program.

Third-party repair technicians will be able to buy original iPhone parts and use Apple’s diagnostic software and repair manuals to fix iPhone models 6s and later.

The repair shops will also only be allowed to fix iPhones that are out of warranty. Authorized dealers will continue to be the only places where consumers can go to get other devices fixed, such as laptops, as well as iPhones still covered by warranty. Apple said it has no plans to allow consumers to access iPhone parts and service manuals on their own.

“We believe the safest and most reliable repair is one handled by a trained technician using genuine parts that have been properly engineered and rigorously tested,” Jeff Williams, Apple’s chief operating officer, said in a statement.

Apple piloted the new program with 20 independent repair shops globally, including one in Canada. The program will launch only in the U.S. for now, but will eventually expand to Canada and other countries, Apple officials said.

In opening iPhone repairs to shops outside of its network of licensed providers, Apple is bowing to a political backlash against manufacturers that have made it increasingly difficult for consumers and independent technicians to tinker with devices.

Proponents of the growing “right to repair” movement argue that strict repair policies requiring consumers to go through expensive licensed dealers have become a way for companies to force customers to buy new products.

The Federal Trade Commission, the U.S. consumer affairs watchdog, held a workshop in July to study whether repair restrictions were unfairly limiting consumer choice. More than 20 states in the U.S. have proposed legislation that would require manufacturers to sell original parts and repair manuals to their customers. Earlier this year Ontario Liberal MPP Michael Coteau introduced a private member’s bill that would have required companies to provide consumers and small businesses with tools to repair their gadgets, though the bill died in the Progressive Conservative-controlled legislature in May.

Electronics manufacturers have lobbied heavily against such legislation, arguing that letting consumers and small repair shops fix devices undermines intellectual property rights and presents safety risks if people unwittingly damage their device while trying to repair it. They have said that sharing detailed repair manuals and diagnostic software could make devices vulnerable to hackers.

Apple’s changing stance on independent iPhone repairs comes as the company is facing slower phone sales. Revenue from smartphone sales fell an annualized 12 per cent in the most recent quarter ending in June. For the first time in seven years iPhone sales accounted for less than half the company's revenues.

The slowdown has been driven, in part, by U.S. President Donald Trump’s escalating tariff war with China, but also by U.S. consumers holding onto their phones for longer. Users of the iPhone owned their devices for an average of 2.92 years before upgrading to a new one, nearly six months longer than they did two years earlier, according to an October report from Hyla Mobile Inc., which specializes in the market for used cellphones.

By contrast, Apple has seen strong revenue growth from sales of wearables and other accessories that work with the iPhone, such as the Apple Watch and AirPod wireless earbuds. Sales of subscription services such as music and Apple’s recently launched news service rose an annualized 13 per cent in the most recent quarter. The Cupertino, Calif. company plans to launch new TV and video game subscription services later this year, along with an Apple-branded credit card in the U.S. 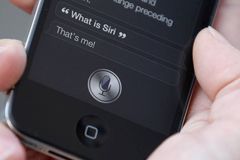 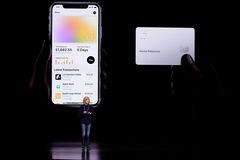