Former President Donald Trump’s signature border wall project would lose much of its funding as well as the fast-track status that enabled it to bypass environmental regulations under a Biden administration plan announced Friday.

President Joe Biden suspended construction of the wall upon taking office while his administration reviewed the project. That angered Republicans in Congress eager to see it go forward amid an increase in apprehensions of migrants along the southwest border.

The new plan does not cancel the wall project outright, but it’s still likely to face opposition in Congress, where many Republicans are eager to promote a project closely associated with the former president.

Biden plans to return more than $2 billion that the Trump administration diverted from the Pentagon to help pay for the wall and use other money appropriated by Congress to address “urgent life, safety, and environmental issues” created by the construction. It also asks lawmakers not to provide any additional funding for what the Biden team believes is an unnecessary effort.

“Building a massive wall that spans the entire southern border and costs American taxpayers billions of dollars is not a serious policy solution or responsible use of federal funds,” the Office of Management and Budget said in a statement outlining the plan.

The government has built walls and other barriers along the 3,200-kilometre U.S.-Mexico border for decades to eliminate some of the easier routes of avoiding checkpoints. Trump turned the issue into a centrepiece of his political identity.

Trump vowed to build a “virtually impenetrable” wall, insisting it would be paid for by Mexico, which never happened. Instead, his administration set aside about $15 billion through a combination of congressional appropriations and taking the money from the Pentagon and other parts of the government.

The Trump administration built about 725 kilometres of wall, moving quickly and waiving requirements for environmental reviews and mediation, though only about 84 kilometres were in areas where no barrier previously existed.

Biden’s decision to suspend construction prompted Republican senators to ask the Government Accountability Office to investigate whether the administration was violating federal law in not using appropriated money for its intended purpose.

The administration said Friday that it will use funds already set aside by Congress for “their appropriated purpose, as required by law” but is requesting no new money for wall construction in the Department of Homeland Security’s 2022 budget.

Biden is instead seeking money for increased technology at the ports of entry and elsewhere, saying there are more efficient ways to stop illegal immigration and drug smuggling at the border.

The administration said it would return $2 billion taken from the Pentagon and use it for the construction projects for which the money was originally intended. That includes $79 million for an elementary school for the children of American service members in Germany; $25 million for a fire and rescue station at Tyndall Air Force Base in Florida; and $10 million to expand defences against North Korean ballistic missiles at Fort Greely in Alaska.

It plans to use the approximately $1.9 million remaining appropriated by Congress for the wall for drainage and erosion control or other environmental problems caused by wall construction in the Rio Grande Valley of Texas and elsewhere.

Dozens of advocacy organizations have called on the Biden administration to pay for the restoration of sensitive wildlife habitat and land considered sacred to Native Americans that was damaged by wall construction. “This is a welcome, sensible next step to begin healing the devastation that Trump inflicted on the borderlands,” said Paulo Lopes, a senior policy land specialist for the Center for Biological Diversity.

The administration doesn’t explicitly say it won’t build any new wall. But it says that any new construction will be subjected to environmental review and that it will review ongoing efforts to seize land from property owners by eminent domain and will return parcels to the owners if the Department of Homeland Security determines it’s not needed.

Texas Gov. Greg Abbott, a Republican, said Thursday that the state would build its own new barriers along the border with Mexico but offered no details, including precisely where or what they would look like. He has promised more details next week.

“We need to recognize that the numbers of people coming across the border are just going to continue to increase unless we change the game plan,” Abbott said.

Texas says it will build border wall with Mexico
June 10, 2021 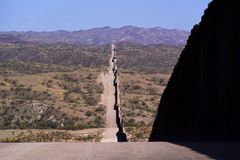