Boeing Co. on Wednesday swung to its first annual loss since 1997 as 737 Max costs doubled to nearly US$19-billion, and the plane manufacturer indicated it would again cut production of its bigger 787 Dreamliner aircraft, currently its main source of cash.

Boeing, struggling to restore public confidence and recover from the biggest crisis in company history, has halted production of the once fast-selling 737 Max, which was grounded in March after two deadly crashes. The company is immersed in compensation talks with airline customers and dealing with lawsuits from victims’ families and a criminal probe.

Boeing shares were 1.7 per cent higher, as some analysts had expected an even larger charge for 737 Max costs. The stock has lost about a quarter of its value since early March, 2019.

Deliveries of hundreds of jets remain frozen while Boeing updates the flight-control system and software to address issues involved in both crashes.

Mr. Calhoun, who served on Boeing’s board for 10 years, dismissed suggestions that he was an “insider” ill-suited to introducing radical change and pledged to overhaul the culture.

“I think I watched the same movie you did,” he told reporters.

Costs related to the 737 Max grounding reached US$14.6-billion in 2019 and the planemaker warned of another US$4-billion in charges in 2020 because of the expense of slowly re-starting production. Boeing had estimated a US$9.2-billion price tag for the Max fallout in the third quarter.

The amount does not include potential settlements or damages from more than 100 lawsuits the company faces from victims’ families in both crashes, which together killed 346 people. Boeing is also the target of a U.S. criminal investigation into matters related to the 737 Max.

It also remains to be seen whether passengers will be willing to fly in the 737 Max once regulators approve Boeing’s fixes.

“I can’t market it or merchandise it or hang banners on it or change the name of it. That won’t convince anybody. But when they see it operating and they see it flown and they see pilots getting on, I think we’re [going to] be okay,” Mr. Calhoun said.

Analysts on average expected Boeing to post earnings per share of US$1.47 in the quarter, although several had predicted a loss amid a wide range of forecasts owing to uncertainties over the cost of the 737 Max crisis.

The company also booked more charges on its military tanker and space programs.

Adding to Boeing’s pain, demand for its bigger and more profitable jet – the 787 Dreamliner – has waned in the face of the U.S.-China trade war.

Boeing had already announced in October plans to lower the production rate for its 787 Dreamliner to 12 a month in late 2020 from 14 and now expects to cut the rate to 10 a month in early 2021, hurting cash flow at a time when its debt is mounting.

Cash flow recovery is not expected to start until 2021, chief financial officer Greg Smith said on the call.

The Max charges include US$8.3-billion to compensate airline customers that are cancelling flights and scaling back growth plans in a hit to profits while their Max jets remain grounded.

U.S. airlines have taken the Max off their schedules until early June and have said they need at least 30 days after regulatory approval to prepare their jets and train pilots. Boeing is recommending both simulator and computer-based training.

Mr. Calhoun said it would take about 18 months to work through its 737 Max inventory once deliveries resume.

General Electric Co. plans to slash 737 Max engine deliveries to Boeing roughly in half this year.

In a respite from the crisis over the Max, Boeing successfully staged the first flight of a larger jet, the 777X, on Saturday.

But Mr. Calhoun has sent the aerospace giant back to the drawing board on proposals for a new mid-market aircraft, effectively shelving in their current form plans worth US$15-billion-US$20-billion.

He told analysts the decision was not about him “not wanting to do new airplanes. We’ll do one.”

“But honestly right now it’s all about the Max.” 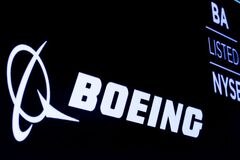 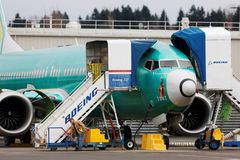 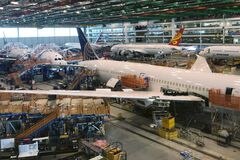