Boeing Co. said Wednesday it still expects U.S. regulatory approval for its grounded 737 Max in the fourth quarter, sending its shares higher despite a slump in quarterly profit.

The world’s largest plane maker also said it was cutting production of its flagship Dreamliner, delaying plans to step up output of its money-spinning 737 line, and also delaying the arrival of a successor to its 777 mini-jumbo.

Boeing did not take fresh charges on top of the estimated US$8-billion price tag for the Max crisis, but warned of pressure on its cash flow until deliveries and production resume at normal levels.

On Wednesday, the U.S. manufacturer reported a 53-per-cent drop in quarterly profit and had a negative free cash flow of US$2.89-billion in the quarter, compared with a positive free cash flow of US$4.1-billion a year earlier. Core operating earnings fell to US$895-million or US$1.45 a share, from US$1.89-billion, or US$3.58 a share, a year earlier.

The plane maker separately faces a slew of investigations by regulators, U.S. Congress and the Department of Justice over its development of the 737 Max, its previously bestselling workhorse for short-haul travel.

Despite these risks, Boeing shares were up 0.6 per cent, at US$339.13, in afternoon trading, as its steady estimate of a 737 Max return in the fourth quarter appeared to eclipse the downside of the 787 production cut due to a drought of orders from China amid trade tensions, an analyst said.

“The 787 cut appears to be mostly tied to China trade negotiations, which at least have the potential to improve over the next 12-months,” Seaport Global analyst Josh Sullivan said.

On Tuesday, the company ousted the top executive of its crucial commercial airplanes division, Kevin McAllister, in an unexpected management shakeup related to the Max crisis that senior industry sources say puts chief executive Dennis Muilenburg squarely in the firing line in the event of further revelations, or if the company fails to recover from the Max crisis.

Mr. Muilenburg, stripped of his board chairman title earlier this month, is set to testify before U.S. lawmakers over two days in Washington next week.

“I anticipate there will be tough questions, challenging questions, a lot of scrutiny,” he told analysts and journalists on a conference call. “And frankly, we support the scrutiny on the work that we’re doing.”

Earlier in the call, Mt. Muilenburg expressed regret over instant messages, first published by Reuters on Friday, in which a former Boeing pilot describes erratic simulator behaviour of software now linked to both crashes.

The 2016 messages, sent months before the aircraft entered service, plunged Boeing into a media firestorm and erased some US$14-billion of its market value as the FAA and lawmakers demanded explanations on their content and delayed release.

Boeing’s timeline of a fourth-quarter Max return compares with a January target from European regulators, while major U.S. carriers United, Southwest and American were all drawing up schedules without the Max until next year.

Asked about potential delays from overseas regulators, which also must approve the Max’s return, Mr. Muilenburg said, “it could well be that approvals will vary by jurisdiction.”

“And again, the regulators will make that decision. Ultimately, it will be their timeline,” he said.

Mr. Muilenburg said the company was making “daily” progress on testing the final software fix for the 737 Max and developing related training materials, although the FAA said Tuesday it would need at least several more weeks for review.

The company could consider cutting or halting 737 production if regulatory approvals are further delayed, Mr. Muilenburg said, although there was no immediate announcement of job cuts.

The Max crisis, which has consumed the company, has eclipsed work on a potential new mid-market airplane code-named NMA, and other industrial setbacks broadened pressure on the company’s new commercial leadership.

On Tuesday, Boeing named veteran executive Stan Deal, who had been running its two-year-old Global Services Division, to the top job at commercial airplanes.

Mr. Deal’s challenge is to get the Max back into service globally while simultaneously handling new aircraft deliveries and boosting 737 production. That’s seen as one of the most formidable logistical challenges in the industry’s history.

After the 737 Max safety ban in March, Boeing cut 737 monthly production from 52 aircraft to 42 and halted deliveries, cutting off a key source of cash and hitting margins.

Boeing’s previous schedule to hit a record manufacturing rate of 57 single-aisle jets a month by June, 2020, after incrementally returning to precrash levels, was now delayed until late 2020, the company said.

Mr. Muilenburg also said General Electric was making “good progress” addressing problems with its GE9X engine for the 777X twin-aisle, and the aircraft was still on track for a first flight in early 2020.

Citing global trade tensions and a lack of orders from China, the United States’ largest exporter was also reducing the 787 Dreamliner production rate to 12 airplanes a month for approximately two years beginning in late 2020.

Boeing faced additional uncertainty over future production rates for its Dreamliner earlier this month from lost business, theoretically putting a hole in production after Boeing increased its build rate to 14 aircraft a month, from 12, at twin U.S. factories. 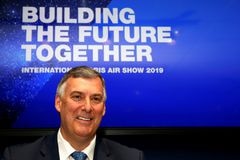 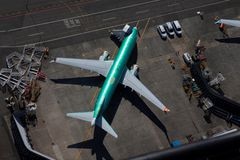