Alarmed at China’s stranglehold over supplies of masks, gowns, test kits and other front-line weapons for battling the coronavirus, countries around the world have set up their own factories to cope with this pandemic and outbreaks of the future.

When the outbreak subsides, those factories may struggle to survive. China has laid the groundwork to dominate the market for protective and medical supplies for years to come.

Once vaccines emerge, demand will plummet. Factories will close. But Chinese companies are likely to have the lowest costs by far and be best positioned for the next global outbreak.

China’s grip on the market is a testament to its drive to dominate important cogs in the global industrial machine.

For years, China’s leaders have worried that the country depended too much on foreign sources for things such as medical supplies, microchips and airliners. It has used subsidies, economic targets and other government inducements to emerge as a powerhouse in those important industries and others.

When Chinese leaders became concerned about pollution and dependence on foreign oil, for example, they helped local makers of solar panels, wind turbines and high-speed rail equipment clobber the competition. They have taken similar steps to dominate industries of the future, such as the next generation of wireless data transmission, known as 5G.

The state’s heavy involvement in its economy has led to waste and graft that could slow China’s growth. But the policies have often proved effective in building industries that can withstand losses and tough foreign competition. Medical supplies may be similar.

“There will be massive consolidation after the epidemic,” said Howard Yu, a professor of management and innovation at the Institute for Management Development, a business school in Switzerland. “It will be exactly the same dynamics as in green energy, 5G and high-speed rail.”

Before the pandemic, China already exported more respirators, surgical masks, medical goggles and protective garments than the rest of the world combined, the Peterson Institute for International Economics estimated.

Beijing’s coronavirus response has only added to that dominance. It increased mask production nearly 12-fold in February alone. It can now make 150 tons a day of the specialized fabric used for masks, said Bob McIlvaine, who runs a namesake research and consulting firm in Northfield, Ill. That is five times what China could make before the outbreak, and 15 times the output of U.S. companies even after they ramped up production this spring.

U.S. companies have been reluctant to make big investments in fabric manufacturing because they worry that mask demand will be temporary. But Texas required Thursday that most residents wear masks in public places, part of a broader embrace of face masks in recent days.

“It is a huge mistake to assume that the market will disappear,” Mr. McIlvaine said.

Ma Zhaoxu, vice-minister of foreign affairs, said that from March through May, China exported 70.6 billion masks. The entire world produced about 20 billion all of last year, with China accounting for half.

Other countries now want self-reliance. Earlier in the pandemic, China sometimes decided which countries received crucial supplies and demanded profuse and public thanks in exchange.

President Emmanuel Macron of France pledged in March to produce homegrown masks and respirators by the end of this year. Peter Navarro, President Donald Trump’s industrial policy adviser, has begun a push for the federal government to buy U.S.-made pharmaceuticals and medical supplies.

China, however, has a head start.

In 2005, after the outbreak of SARS, which killed 350 people in China, the Ministry of Science and Technology announced that it had developed respirators that better fit Chinese faces. In 2010, the government’s five-year economic plan ordered a “focus on developing basic equipment and medical materials that have high demand, wide application and are mainly imported.”

China also foresaw the importance of nucleic acid test kits, which can detect coronavirus infections. In 2017, the Ministry of Science and Technology identified the kits as a “targeted development” industry.

The ministry’s decision was part of the country’s US$300-billion “Made in China 2025” industrial policy to replace imports in many key industries, including medical devices. The ministry called for raising China’s share of the local market by 30 to 40 percentage points in each category of medical supplies.

Shenzhen Mindray and Winner Medical declined to comment, while Guangzhou Improve did not respond to numerous requests.

Hospitals began to buy locally. Three years ago, the central government required purchasers to buy from domestic producers that could meet requirements. Local governments followed. Sichuan province, for example, cut in half the number of categories for which medical equipment and supplies could be imported. Only the top hospitals could import anything, the provincial government said, while lower-ranked hospitals had to buy everything in China.

Such efforts helped put China firmly at the front of the industry, as Rakesh Tammabattula discovered. An entrepreneur in the Los Angeles suburbs, he shifted his business from making nutrition supplements and moisturizer to the production of medical masks and hand sanitizer in response to the epidemic. To do that, he needed a machine that could compress and cut fabric to make masks.

He discovered that the machines were made only in China. He had to charter a jet to fly the huge device – 36-feet long, 6-feet high and 5-feet wide – from southern China to Los Angeles.

“It’s not that we can’t make this,” said Mr. Tammabattula, chief executive of QYK Brands. “It’s just that we haven’t focused on it.”

The Chinese government played a major role in this year’s medical-equipment build-out.

Sinopec, a state-owned Chinese oil company, said it had worked closely with the Chinese Communist Party as it set out to build a factory to make the particle-trapping fabric needed for surgical masks and respirators.

At one site, 600 engineers and workers laboured in shifts day and night for 35 consecutive days to build a factory that would normally take a year to construct. A “party member assault team” worked 20 hours straight Feb. 26 to prepare a warehouse for the project, according to the company.

Officials also accelerated efforts to make land available for new factories. The city of Hangzhou in Zhejiang province transferred 1.6 acres to the Jiande Chaomei Daily Chemical Co. on Feb. 15 for an emergency expansion of respirator production. Lanxi, a county in Zhejiang, transferred land to the Baihao New Materials Co. by the end of February for respirator production. Officials in Guangdong province and the city of Jinan in Shandong province approved more lenient land policies for medical supply businesses as well.

Government support for the medical supply industry is continuing. Guangzhou Aoyuan Biotech Co. decided this year to expand from its usual business of making disinfectant to the manufacture of N95 masks. A top local official immediately visited the company, arranged land for it in an industrial park and approved all the necessary forms.

A few economic policy experts in China contend that their country may be going too far. According to Tianyancha, a Chinese data service, more than 67,000 companies have registered in China this year to make or trade masks. Many startups with poor quality control have already run into trouble. The Chinese government has imposed increasingly stringent customs inspections on exports.

“Many mask-manufacturing enterprises – especially the small and medium enterprises that came into the picture much later and do not possess strong foundations – would have to face closure when they have a surplus of masks and profits begin to plunge,” Cai Enze, a retired deputy mayor and economic planner in central China, wrote in an essay in April. “That marks the start of a crisis.”

Still, the broader industry in China appears to be better prepared for the future.

In Los Angeles, Mr. Tammabattula has found that even producing hand sanitizer is hard. He has been unable to find any U.S. company that still makes plastic bottles with pump handles. He imports them, on expensive chartered aircraft, from China.

Mr. Tammabattula has applied for a federal loan for small businesses trying to produce medical supplies, but the paperwork has proved extensive, daunting and slow, he said.

“If we were to compare to the Chinese government,” Mr. Tammabattula said, “there’s just no support for domestic manufacturing.”

Federal government to go back to using competitive bid processes for some COVID-19 medical supplies
June 23, 2020 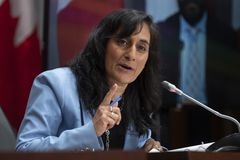 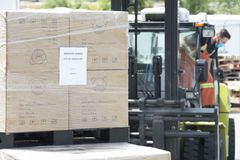 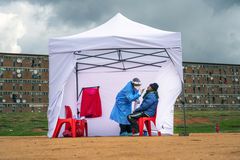