China will strive to reach an initial trade agreement with the United States as both sides keep communication channels open, the Chinese commerce ministry said on Thursday, in an attempt to allay fears talks might be unravelling.

China is willing to work with the United States to resolve each other’s core concerns on the basis of equality and mutual respect, and will try hard to reach a “phase one” deal, Gao Feng, spokesman at the ministry, told reporters.

“This is in line with the interests of both China and the United States, and of the world,” Gao said.

Economists warn that the prolonged trade dispute between China and the United States is escalating risks to the global economy by disrupting supply chains, discouraging investment and dampening business confidence.

Completion of a phase one deal could slide into next year, trade experts and people close to the White House told Reuters previously, as Beijing presses for more extensive tariff rollbacks and the U.S. administration counters with heightened demands of its own.

China has invited top U.S. trade negotiators for a new round of face-to-face talks in Beijing, the Wall Street Journal reported on Thursday, citing unnamed sources, adding Beijing hopes the round of talks can take place before next Thursday’s Thanksgiving holiday in the United States.

U.S. officials have indicated they would be willing to meet in person but have not committed to a date, the report said, and they would be reluctant to travel for the talks unless China makes it clear it would make commitments on intellectual property protection, forced technology transfers and agricultural purchases.

Global equities retreated on Thursday due to concerns that the ‘phase one’ deal would be delayed. The trade jitters also sent the 10-year U.S. Treasury yield down to near its lowest levels in three weeks. The Chinese yuan also softened against the dollar.

Officials from Beijing had suggested that Chinese President Xi Jinping and U.S. counterpart Donald Trump might sign a deal in early December.

Some experts said the next date to watch was Dec. 15, when U.S. tariffs on about $156 billion in Chinese goods are set to take effect, including holiday gift items such as electronics and Christmas decorations.

In a dinner speech in Beijing on Wednesday, Chinese Vice Premier Liu He said he was “cautiously optimistic” on a phase one deal, Bloomberg News said, citing people who attended the event ahead of a forum organised by Bloomberg LP.

Liu, China’s chief negotiator at the trade talks, separately told one of the attendees that he was “confused” about the U.S. demands, but was confident the first phase of a deal could be completed nevertheless, Bloomberg added.

Gao, when asked about sticking points and whether they were related to Washington’s demand for China to buy more U.S. farm goods and the tariff rollbacks, said he did not have more information to disclose beyond the fact that both parties would continue to communicate, and “outside rumours are not accurate.”

A former Chinese commerce minister told Reuters that both sides should return to the time when the trade war first started.

“We should return to the point of origin and cancel all tariffs,” Wei Jianguo said on the sidelines of the Bloomberg forum.

Wei said he was hopeful for a phase one pact, in light of the pressure on both the U.S. and Chinese economies as the trade war dragged on.

“Now, Trump himself is cognizant about the needs of the (upcoming U.S.) elections, and the U.S. economy has also suffered great losses,” he said.

“Under such circumstances, it is entirely possible to reach a phased agreement.”

A fresh row between Washington and Beijing over U.S. legislation on Hong Kong has also threatened to undermine their trade talks and delay a phase one deal that investors had initially hoped to be signed by now.

The U.S. House of Representatives on Wednesday passed two bills to back protesters in Hong Kong and send a warning to China about human rights, with Trump expected to sign them into law.

The measure, which has angered Beijing, would require the State Department to certify at least once a year that Hong Kong retains enough autonomy to qualify for the special U.S. trading consideration that helped it become a world financial centre.

It also would provide for sanctions against officials responsible for human rights violations in the Chinese-ruled city.

“We urge the U.S. side to cease this activity, stop before it’s too late and take measures to prevent these measures from becoming law, stop meddling in Hong Kong’s affairs and China’s affairs,” said Geng Shuang, spokesman at the Chinese foreign ministry.

“If they must insist on going down this wrong path China will take strong counter-measures,” Geng told reporters at a regular briefing on Thursday.

Demonstrators have protested for months in the streets of Hong Kong, amid increasing violence and fears that Beijing will ramp up its response to stop the civil disobedience.

Trump has 10 days, excluding Sundays, to sign a bill passed by Congress, unless he opts to use his veto.

On Thursday, the ruling Chinese Communist Party’s main newspaper, the People’s Daily, urged the United States to “rein in the horse at the edge of the precipice” and stop interfering in Hong Kong matters and China’s internal affairs.

“If the U.S. side obstinately clings to its course, the Chinese side will inevitably adopt forceful measures to take resolute revenge, and all consequences will be borne by the United States,” it said in a front-page editorial.

U.S.-China ‘Phase One’ trade deal may not be inked this year
Subscriber content
November 20, 2019 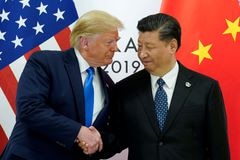 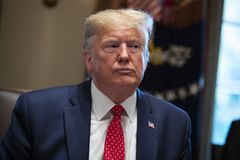