Hundreds of Frito-Lay employees ratified a contract Saturday, ending a nearly three-week strike over forced overtime and long hours that many workers said had pushed them past the point of exhaustion, union officials said.

The agreement, which was ratified in a vote that one union official described as close, puts an end to what workers at the Frito-Lay plant in Topeka, Kansas, call “suicide shifts” – back-to-back 12-hour shifts with only an eight-hour break in between.

“The outcome of this strike was a testament to the tenacity and grit of the Frito-Lay workers in Topeka,” Anthony Shelton, international president of the Bakery, Confectionery, Tobacco Workers and Grain Millers International Union, which represents the employees who are members of Local 218, said in a statement.

The workers in Local 218 said they went on strike because the company had refused to address their concerns about the shifts, which they said took away time with their families and did not even allow enough time to get a full night’s sleep.

Workers had said Frito-Lay could easily address the gruelling shifts without hurting the company’s bottom line. Frito-Lay is a division of PepsiCo , which recently reported a huge jump in revenue in its drinks and snacks businesses.

Paul Klemme, a chief shop steward who has worked at the Topeka plant for nine years, said he had once worked three months straight without a day off.

“I missed a lot of time with my children when they were in high school because of the shift that I worked and the hours that I worked,” he said. “It’s physically draining.”

Klemme said the new contract guarantees one day off a week for workers, does away with forcing workers to take the “suicide shifts” and increases wages. He declined to provide precise numbers because he said he was not authorized to give that information. Corrina Christensen, a spokesperson for the international union, declined to provide additional details of the agreement or say how the membership voted.

In a statement, Frito-Lay said the new two-year contract includes a 4% wage increase for all job classifications and “additional opportunities for the union to have input into staffing and overtime.”

The company said it believed its approach to resolving the strike “demonstrates how we listen to our employees, and when concerns are raised, they are taken seriously and addressed.”

Klemme said he would have liked to have seen better wage increases for the employees. Some departments had not had an increase in hourly pay of more than 20 to 40 cents in the past six to eight years, he said.

“I think it could have been better, but I think the time off for people is worth it,” Klemme said.

One warehouse worker who has been at the plant for roughly two decades said there was “more disappointment than happiness” with the contract. The man, who spoke on the condition of anonymity, fearful of retaliation from the company, said many workers who crossed the picket line or voted to approve the contract did so out of need.

“A lot of people had to vote yes because they were running out of money and didn’t have insurance,” he said.

The food and beverage giant, which is home to Pepsi, Mountain Dew and Doritos, said this month that its net revenue in the quarter surged by 20.5%, to $19.2 billion, from a year earlier.

Shelton said more than 600 union members had picketed and marched over the past 20 days.

The workers at the Topeka plant “have shown the world that union working people can stand up against the largest food companies in the world and claim victory for themselves, their families and their communities,” he said.

The company had tried to push back on the union’s complaints about the long shifts.

It said that out of about 850 employees in Topeka, only 20 averaged over 60 hours per week.

The company said its records indicated that 19 employees worked 84 hours in a given workweek this year, and 16 of those had volunteered for overtime. Only three of the 19 had been required to work, the company said.

The company also said it was continuously hiring new part-time and full-time workers in Topeka. The plant made 263 hires last year and has hired 209 workers this year.

Frito-Lay employs more than 66,000 people, and the strike is the first at one of its plants in three decades, according to the company.

It was the first time workers at the plant in Topeka went on strike, Klemme said.

Of approximately 850 manufacturing and warehouse employees who are part of the bargaining unit on strike, about 300 continued to work through the strike, the company said. Teamsters to vote on division to unionize Amazon workers
June 22, 2021 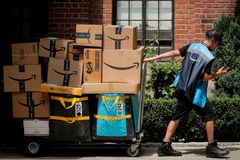