If the proposed merger between Deutsche Bank and Commerzbank were a film, it would already be racking up the rotten tomatoes.

The powerful labour unions are against it. Regulators are wary and could impose onerous conditions. Shareholders are skeptical. There is some formidable political momentum behind it, but the government is split over the wisdom of morphing Germany’s two largest banks into one.

The banks are expected to announce in coming days or weeks whether they will pursue becoming a megabank. Say this much: The saga is particularly German. It is hard to imagine a bank merger in any other country generating as much emotion and debate.

If Deutsche Bank and Commerzbank merge, Germany will have only one large publicly traded bank, compared with at least four a decade ago. Commerzbank and Deutsche Bank, both founded in the 19th century when Germany was emerging as an industrial and geopolitical power, are closely entwined with the country’s history and identity.

So it’s no wonder that people are arguing forcefully for and against a deal and even protesting on the streets. Here are some of the big potential deal breakers.

The European Central Bank has a say

Any merger will face scrutiny by the European Central Bank, the supreme bank supervisor in the eurozone. The central bank will insist that the new institution is not too big to fail, meaning that taxpayers won’t be on the hook if there is a crisis.

“You want to make sure that the transaction is successful,” Mario Draghi, the president of the European Central Bank, said during a recent news conference, without mentioning either bank by name, “and to be successful means that it not only pleases shareholders but actually creates an entity which is strong and capable of coping with the various challenges.”

There is a good chance the central bank won’t sign off on a merger unless the banks raise new capital, bolstering their ability to withstand a crisis. That would be difficult for the banks to do. They would have to go to investors who have already been burned by the banks’ slumping share prices.

In 2017, Deutsche Bank sold newly issued shares to raise 8 billion euros ($9 billion) in additional capital. Since then, the bank’s share price has fallen by half. Commerzbank shares are trading at about the same price as two years ago, but have fallen 40 per cent since peaking in January 2018. Good luck asking investors to pitch in again.

Labour will be calculating job cuts

Bank workers have staged short-term walkouts and street protests in recent weeks to demonstrate their clout as part of active wage negotiations, which apply to the banking sector as a whole. Some employees took the opportunity to express their opposition to a merger. “Blue Blood Does Us No Good,” read a handwritten sign at a protest by Commerzbank workers, a reference to the blue Deutsche Bank logo.

The union that represents workers is officially against a merger, which would lead to an estimated 30,000 job cuts right away and probably many more down the road. The union might even be able to veto a deal. As with all large German companies, employee representatives hold half the seats on the banks’ supervisory boards, while shareholder representatives hold the other half.

That means employee representatives need just one sympathetic shareholder on the board to muster a majority against a deal.

Compared with other big European banks, the two Frankfurt lenders are very inefficient. Commerzbank’s cost-income ratio, a measure of a bank’s operating costs compared with its operating profit, was 80 per cent in 2018. Deutsche Bank’s was 93 per cent. (The lower the number, the more efficient the bank.) By comparison, the cost-income ratio of the Dutch bank ING, which has a large presence in Germany, was 55 per cent.

Rather than blocking a merger, pragmatic employee representatives may use their clout to insist that any deal includes generous severance packages.

A merger “would only make sense if they were proposing a viable business model, which would include job guarantees,” said Jan Duscheck, who oversees bank issues for Ver.di, the union that represents workers at both banks.

Shareholders could be wary of risks

Ultimately, the banks’ shareholders, most of which are investment funds like BlackRock or other professional investors, will decide whether to approve the merger. They have already suffered big losses on their holdings in Commerzbank and Deutsche Bank and are likely to be wary of the huge risks involved in a merger.

Combining the two banks would be a monumental task that would drain money and management time. “What we have seen in the past with mergers is that they preoccupy the banks for many years,” said Tobias Berg, associate professor for finance at the Frankfurt School of Finance and Management.

“If they are busy with a merger for the next five or six years,” he said, “what innovations will be lost?”

The other question that shareholders are asking is: What’s the point? The morning after a merger, both companies would still have the same basic problem they have now: a lack of profitable business areas.

“The question at the end of the day is, how can the banks earn any money?” said Sascha Steffen, a professor of finance at the Frankfurt School. “That would not necessarily change in a merger. What is the future business model that they can earn money with?”

But some influential shareholders may be leaning toward a deal. One of them is likely to be Cerberus Capital Investment, the private equity firm that owns about 5 per cent of Commerzbank and, through the co-founder Stephen Feinberg, 3 per cent of Deutsche Bank.

Cerberus declined to comment and has not taken a public position on the merger. But its management of Bawag, an Austrian bank, offers a clue. Cerberus successfully cut costs at Bawag after buying it in 2007 and made it one of the most efficient banks in Europe. If Cerberus can apply the same expertise on a much larger scale in Frankfurt, the profits would be immense.

Berlin has to back it

A merger won’t happen without the blessings of the German government, which owns 15 per cent of Commerzbank after a bailout a decade ago. But Angela Merkel’s government is divided on the deal, and it faces stiff resistance from opposition parties.

“What could be the positive outcome of a fusion, other than they will be bigger?” asked Lisa Paus, a member of parliament who speaks for the opposition Green Party on finance issues. “I don’t see ‘bigger’ as a very strong argument.”

Lately the government has been playing down its involvement, a sign that it does not want to stake too much prestige on the outcome.

“A successful financial centre and strong banking sector are in our economic interest,” Jörg Kukies, a former Goldman Sachs partner who is now an undersecretary in the German Finance Ministry, said in an interview with the Frankfurter Allgemeine newspaper published Sunday. “That doesn’t mean we are pushing mergers. That impression is simply false.” 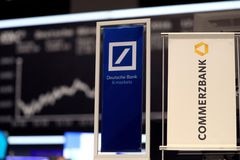 Deutsche-Commerzbank tie-up opposed by 43 per cent of Germans: poll
March 29, 2019 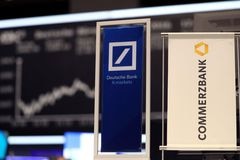 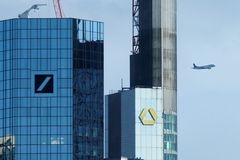