Friday’s surprise decision by the U.S. Department of Justice to replace a top federal prosecutor has thrust one of the Trump administration’s more low-profile, bipartisan officials into the spotlight, shocking people who know and have worked with him.

Over the past day, Securities and Exchange Commission (SEC) chairman Jay Clayton has come under enormous pressure to spurn his nomination to replace U.S. Attorney in Manhattan Geoffrey Berman, who was fired by President Donald Trump on Saturday after refusing to resign in a Friday night statement.

In his post at the Southern District of New York (SDNY), Mr. Berman had led the prosecution of high profile corruption and Wall Street crimes, and had been investigating Mr. Trump’s personal lawyer, Rudolph Giuliani. Mr. Giuliani has not formally been accused of any wrongdoing.

Mr. Clayton could not be reached for comment on Saturday. His spokeswoman did not respond to requests for comment.

“Clayton can allow himself to be used in the brazen Trump-Barr scheme to interfere in investigations by the U.S. Attorney for SDNY, or he can stand up to this corruption, withdraw his name from consideration, and save his own reputation from overnight ruin,” the Senate’s top Democrat, Chuck Schumer, tweeted on Saturday.

Lindsey Graham, chairman of the Republican-controlled Senate judiciary committee, said he had not been consulted on Mr. Clayton’s nomination and that he still planned to seek approvals from New York State’s senators, Mr. Schumer and his fellow Democrat Kirsten Gillibrand, as is usual practice.

That announcement left Mr. Clayton’s nomination for the SDNY role in serious doubt. But the episode has nonetheless stunned current and former SEC officials and lawyers who have worked with Mr. Clayton, a former corporate lawyer and political independent who until now has steered well clear of partisan controversy.

It also raises questions about the future leadership of the SEC, which could potentially fall to ranking Republican commissioner Hester Peirce, an ultraconservative who frequently votes against penalizing companies for wrongdoing. Ms. Peirce did not immediately respond to a request for comment on Saturday night.

Mr. Berman himself had been under consideration for the SEC chair role before his bombshell Friday night statement, according to a public letter U.S. Attorney-General Bill Barr sent to Mr. Berman on Friday.

“Given the controversy, I think he [Clayton] will bow out,” said J.W. Verret, a securities law professor at George Mason University who said he knows Mr. Clayton from his work on the SEC’s Investor Advisory Committee. He described Mr. Clayton as “mild-mannered” and said he has “played it straight up the middle” at SEC.

While Mr. Clayton has been criticized by Democrats and consumer advocates for pushing the Trump administration’s agenda to cut red tape, he is generally respected for his expertise and described by those who deal with him as thoughtful and affable.

“It is not clear to me that he is the right person for the SDNY job if the objective is to do the President’s bidding against his own judgment,” said Scott Bauguess, a University of Texas professor and former SEC official.

One current SEC enforcement division staffer said that within the agency, where Mr. Clayton is well liked, people were “stunned” that he had become embroiled in what appeared to be a political firing. “I view that as a betrayal of what he stood for over his three years at the SEC,” this person said.

He also questioned whether Mr. Clayton, who does not have a background in criminal prosecutions and can only pursue civil cases at the SEC, had the qualifications for the role.

An hour after Mr. Berman issued a statement on Friday saying he would not resign, Mr. Clayton sent a note to all SEC staff saying it was “a great honor to be considered for this important position.” He added that he remained “fully committed” to SEC work pending his confirmation, according to the e-mail seen by Reuters.

Three people with knowledge of Mr. Clayton’s thinking said he had been on the lookout for a senior government post that would allow him to be based in New York, where he was full-time before joining the Washington-based SEC role.

But two of those sources and other lawyers questioned whether he would now want a role that had sparked such a political storm. Mr. Verret speculated that Mr. Clayton may not have had all the facts when agreeing to be nominated.

“I really think Clayton is going to do the right thing here,” he added. 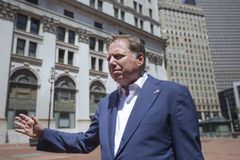 Trump fires U.S. attorney who investigated his associates, after he refused to step down
June 20, 2020 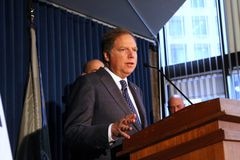 ‘I have not resigned’: U.S. Attorney who oversaw prosecution of Trump allies disputes his replacement
June 20, 2020 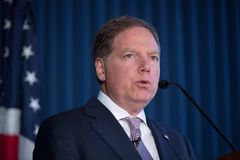