Ever since Volkswagen got caught cheating on U.S. emissions tests five years ago, the auto maker has been trying to regain the confidence of American consumers. Judging by sales figures, the efforts are starting taking hold.

Scott Keogh, VW of America’s CEO since 2018, says the company has worked to rebuild trust with big plans for clean electric vehicles. He spoke to The Associated Press about the German automaker’s U.S. image and changes that are coming to the auto business. His remarks have been edited for length and clarity.

Q: The diesel emissions scandal was pretty disastrous for VW. But sales were rising in the U.S., at least until the pandemic. Is the scandal now behind you?

A: So if I look at a customer’s point of view, we’re seeing near-record loyalty for Volkswagen. If I look at our conquests (pulling buyers from other brands), particularly our SUVs, we’re getting about 70%. What matters to me is getting the brand back to where it belongs. And that is being loved by Americans, not disliked by Americans. When you look at the peak (of the emissions scandal), our brand was actively avoided by nearly 30% of the market. We’ve got that number down to 13, 14%. In life as individuals, we all have bumps, bruises and scars. You never forget them. But there also are these things that allow you to move forward. I believe profoundly America has moved on. I almost never want to say it’s completely gone because it’s almost the thing we want to take with us, to make us a better company.

Q: But you’ve still got a big segment that doesn’t like you?

A: Any brand has 8% or 9% avoidance. For whatever it is, they don’t like you. We have a few points to go. That’s where we were before the crisis, somewhere around 9%, right with the industry.

Q: Do auto sales recover from the pandemic next year?

A: The market in the U.S. will probably be down 14% or 15% in 2020. I would anticipate Volkswagen being down around 10%. So we’re gaining share. What do I see in 2021? I see the overall car market being maybe 15.4 million (vehicles sold). I think the market is going to land at 14.5 million this year. It’s going to add another million units. A quick look at the American consumer: I think consumption is about at 2019 levels now. They’re spending significantly less on restaurants, travel and services, and they’re spending more on durable goods, vehicles or other things. If you look at the savings rate, you’re seeing strong numbers. When COVID gets tamped down, that’s going to get the American consumer even more engaged than they are now.

Q: Early in the pandemic, shoppers and dealers went digital with cars being delivered to consumers. Is this the end of haggling?

A: I think it’s a significant shift in that direction. One thing I love about the independent franchise network is when there is a challenge, nothing happens faster than when your very business is at stake. We see it with their cost cutting, and we’ve seen it with their innovation. Pickup and delivery. Bang. They do it within a day for service and for sales. So is the trend going there? 100%. That’s how consumers want to transact. They want to see transparent and clear. It gives you confidence that the deal you made is similar to the deal that was signed across town or across the state.

Q: You’ve got the ID.4 electric SUV coming in March, and the company is spending $88 billion globally to develop battery vehicles through 2025. There have to be more EVs for the U.S.?

A: More are coming. We will be bringing the magical ID Buzz (new Microbus). This takes all the nostalgia and magic of the bus, makes it electrified. We have two more products, but nothing we are announcing right now. We’re not going to get where we need to without having a portfolio of electric vehicles.

Q: Why spend that much when electric vehicles are so small now?

A: We are betting on the future. The marketplace right now is at 2 (percentage) points. But every single survey we look at, we’re seeing numbers, particularly in the (small) SUV segment, 30%, 40% of consumers say electric will be my next car. We can sit tight, hold our ground, wait. The market becomes 16% electric, and we think now it’s big enough to go get it. By that stage, the competitors are on their second generation vehicle. Then we come with our car, late to the game. We don’t want to be late. We want to lead. 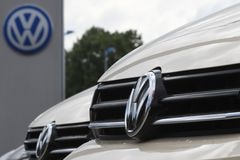 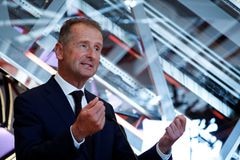 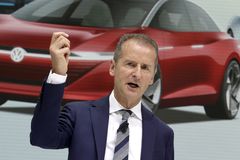