A devastating outbreak of African swine fever that has killed millions of pigs in China is changing attitudes in a country where farm hygiene has often been seen as lax by international standards.

From farms to feed mills to transport, people involved in the pork industry say biosecurity has been tightened, with sales of disinfectants and truck cleaning washes booming as farmers try to fend off the virus.

Farm owner Ma, whose 4,000 herd pig farm was visited by Reuters last year, says she is disinfecting inside and outside pig barns every other day, instead of once or twice a week.

She has also invested in her own truck for delivering pigs to the slaughterhouse and bringing in feed supplies to try to prevent contamination.

“We don’t let other trucks come in. It’s safer to have your own truck,” Ma told Reuters by phone, adding that nobody is allowed to visit in case they bring in the virus.

The change in mindset comes as the disease - which is not harmful to people but kills almost all pigs it infects - has reached every province of the country. There is no cure and, importantly in changing long-term habits, no vaccine.

Official June data released this week showed China’s pig herd - the world’s largest at over 400 million head a year ago - has since shrunk by more than a quarter, although some industry insiders say the numbers may be far higher.

Standards of cleanliness on farms, many of which are small-scale, vary widely, say industry participants, while trucks that transport pigs, feed and other supplies are often not properly cleaned and disinfected between trips.

African swine fever, which spreads through blood, faeces, and other fluids, can last for months on farm surfaces or equipment that has not been properly cleaned.

“We see some significant step-ups in biosecurity measures. People are now recognising that something needs to be done,” said Matthias Arnold, an executive at the Material Protection Products unit of German chemicals firm Lanxess, which sells a popular disinfectant.

Use of cleaning products like detergents and water sanitisers is growing too, said Niu. Farms need to be thoroughly cleaned before disinfecting.

Stricter measures are also in place in feed mills.

“Just moving through different spots in feed mills now you have to disinfect, change clothes, fill in forms,” said Jonathan Wilson, China manager at Alltech Inc, a supplier of additives to feed makers.

“I never saw this during bird flu in 2013, this is a big improvement,” he added, referring to one of China’s worst disease outbreaks before swine fever.

Large farms are installing more truck washes made by Germany’s Karcher or domestic rival Mellberg Cleantecs, said the firms, as well as drying stations for the disinfected vehicles.

Mellberg Cleantecs has also set up a joint venture to sell disinfectants and cleaners produced by Germany’s Envisal, while U.S. company Decon Seven Systems, is registering its hydrogen peroxide-based D7 product for the Chinese market.

There is still some way to go.

The government provides disinfectants to many small farms for free, but the improved practices are raising costs at a time when many farmers are already struggling with losses caused by the disease.

Analysts at Huatai Futures say additional costs of about 0.5 yuan to 1 yuan per half kilogram, or up to 220 yuan ($32) extra per pig, are needed for new biosecurity systems.

To save money, some smaller farms have been using cheap products like calcium oxide, also known as quicklime, which does not effectively kill the African swine fever virus, said Edgar Wayne Johnson, veterinarian at Enable Agricultural Technology Consulting, a farm services company.

Others like chlorine are effective against the virus but are unreliable because of their volatility.

“Some people are changing and some will go out of business,” cautioned Johnson. “Some unfortunately will take more than one punishment.”

“If you’re saving on money for the right biosecurity protocols, you pay it off multiple times. This awareness and understanding in the market is increasing.” 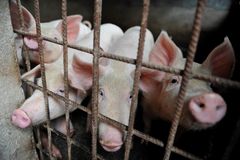 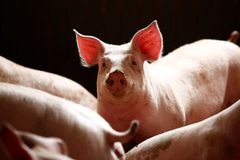