Nissan Motor Co forecast a 28 per cent plunge in its annual operating profit, putting it on course for the weakest earnings in 11 years and underscoring its struggle to turn the page after former Chairman Carlos Ghosn was ousted.

The lacklustre outlook from Japan’s No. 2 automaker – hit by Ghosn’s arrest last year and troubles at its North American business – is likely to add to the pressure on CEO Hiroto Saikawa as he tries to overhaul corporate governance and put Nissan on a more equal footing with alliance partner Renault.

Nissan’s weakening profit and a growing number of departing executives and managers have raised concerns at Renault , which holds a 43 per cent stake in the Japanese firm and has pushed for closer ties.

These issues could strengthen the argument for closer links between the two automakers, although some Nissan executives have opposed a full merger and what they see as an unequal partnership that gives smaller Renault more sway over Nissan.

“Today we have hit rock bottom,” Saikawa told a news conference at the company’s headquarters in Yokohama on Tuesday, adding that he wanted the company to recover to its original performance level in next two to three years.

“Most of the problems we are facing are the negative legacy of our old leader,” he said in a reference to Ghosn, adding that the company had been slow to move on from these problems.

The automaker reported an operating profit of 318 billion yen in the year just ended, down 45 per cent from a year earlier. It also booked 4.4 billion yen in expenses to reflect previous misstatements involving Ghosn’s compensation.

Sluggish profitability would likely result in a 30 per cent cut to full-year dividend to 40 yen per share, Nissan said.

After Ghosn’s ousting as head of the Renault-Nissan alliance, the French automaker is set to discuss forming a joint holding company to give both companies equal footing, people with knowledge of the matter have said.

Saikawa declined to comment on the progress of the discussions, but acknowledged a difference of opinion with Renault Chairman Jean-Dominique Senard regarding a closer capital integration between the two companies.

“I have been negative to the idea of a full merger,” he said. “Now is not the right time to discuss a merger. We have to focus on our recovery,” he said.

Ghosn, out on bail and awaiting trial in Japan, has been charged on several counts of financial misconduct and of allegedly enriching himself at Nissan’s expense. He has denied all charges and said he is the victim of a boardroom coup.

The scandal has rocked the global auto industry and raised concerns about Nissan’s ability to regain its footing following the departure of the charismatic leader and the architect of its alliance with Renault.

Widely considered a protege of Ghosn before taking the reins at Nissan, Saikawa has now come under fire for not doing enough to limit Ghosn’s broad control over the company, and for the drop in the automaker’s performance since he took over in 2017.

Saikawa has said that he planned to eventually hand over to a successor, but on Tuesday he gave no indication of when such a move may come.

“Timing is a matter I need to decide,” he said, adding that he would step down “at the appropriate time.”

The biggest blow to Nissan’s bottom line has come from the costly sales incentives in the United States, where its sales fell 9.3 per cent to 1.44 million units in the year ended March 31.

For years it has relied on heavy discounting in its biggest market to sell its Rogue compact SUVs and Altima sedans, under aggressive targets Ghosn set during his time as CEO.

Saikawa has pledged to focus on improving U.S. profit margins, but it has been a slow process as Nissan continues to resort to discounting.

The automaker also cut its midterm revenue target to 14.5 trillion yen by 2022, from 16.5 trillion yen. It sees its annual operating margin at 6 per cent by then, versus an earlier target for 8 per cent.

Nissan shares are down around 2 per cent this year, after losing a fifth of their value last year. 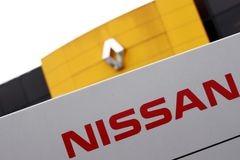 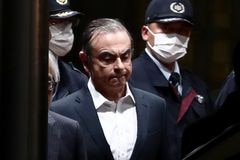 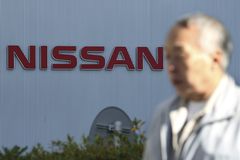