Johnson said the situation at gas stations was improving, though in many regions, hundreds of forecourts remained closed and motorists spent hours hunting for fuel or sat snarled in queues waiting to fill their tanks.

“We now are starting to see the situation improve. We are hearing from industry that supplies are coming back onto the forecourt in the normal way and I would just really urge everybody to go about their business in the normal way,” Johnson said in televised remarks.

Johnson’s comments were his first since the fuel supply problems began at the end of last week when oil companies reported difficulty transporting petrol and diesel from refineries to filling stations.

Opposition Labour leader Keir Starmer accused him and the government of lurching from “crisis to crisis.”

There have been growing calls for doctors, nurses and other essential workers to be given priority in filling their cars to keep hospitals and social care services running, but Johnson said it would be better if “we stabilize it in the normal way.”

An air of chaos has gripped Britain, the world’s fifth-largest economy, in recent weeks as a shortage of truck drivers strained supply chains and a spike in European wholesale natural gas prices tipped energy companies into bankruptcy.

The post-Brexit dearth of truckers has been exacerbated by a halt to truck-driving-license testing during COVID-19 lockdowns as well as people leaving the haulage industry.

It has sown chaos through supply chains and raised the spectre of widespread shortages, price increases ahead of Christmas, and a prolonged rise in inflation.

“What we want to do is make sure that we have all the preparations necessary to get through until Christmas and beyond, not just in supplying the petrol stations but all parts of our supply chain,” Johnson said.

To tackle the shortage of drivers, the government has been forced to bring in measures it had previously ruled out, such as issuing temporary visas to 5,000 foreign drivers.

It has also put a limited number of military tanker drivers on standby to be deployed to deliver fuel if necessary.

Hauliers, petrol stations and retailers say there are no quick fixes as the shortfall of truck drivers – estimated at about 100,000 – is so acute, and because transporting fuel demands additional training and licensing.

“What I don’t think people in this country want to do is fix all our problems with uncontrolled immigration again,” Johnson said. “We tried that for a long time … and in the end people could see it was leading to a low-wage, low-skill approach.”

Industry groups said the worst of the fuel shortages seemed to be in London, the southeast and other English cities. Fights have broken out at some forecourts as drivers jostled for fuel and pictures on social media showed some people filling up old water bottles with fuel.

“I can’t believe it – it’s crazy,” said David Scade, a 33-year-old delivery driver who drove for hours searching for fuel in London. “They keep saying there is no shortage but I suppose everyone is panicking now.”

The Petrol Retailers Association (PRA), which represents independent fuel retailers who account for 65 per cent of all the 8,380 U.K. forecourts, said there were signs the crisis was abating.

“We have conducted a survey of our members this morning and only 37 per cent of forecourts have reported being out of fuel today,” said Gordon Balmer, executive director of the PRA, which had previously reported up to 90 per cent of stations had problems.

“With regular restocks taking place, this percentage is likely to improve further over the next 24 hours.”

Retailers, truck drivers and logistics companies have warned that prices for everything from energy to Christmas gifts will have to rise because of the shortage of truck drivers.

The British Retail Consortium (BRC) urged the government to broaden the size and scope of its temporary visa scheme.

“It will take many months before there are enough new British drivers to cover the shortfall,” said Andrew Opie, director of food and sustainability at the BRC.

European drivers have also indicated they would not take up the visa offer, which only lasts until Dec. 24. Some Polish hauliers said the offer was laughable and the German freight industry said drivers who left after Brexit would not go back. 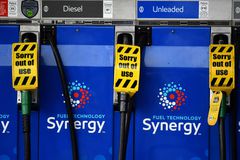