The European Central Bank kept much of its remaining powder dry on Thursday, reaffirming its vast bond buying scheme and dishing out more crisis funding -- but holding powerful options like junk-debt buying back in reserve.

Just weeks after unveiling its biggest stimulus scheme to date, the ECB said it would buy 1.1 trillion euros of debt this year, and it kept the door open to even more as the euro zone economy is shrinking faster than already gloomy expectations.

ECB President Christine Lagarde said the impact of the coronavirus was “unprecedented” and the speed and scale of the recovery “highly uncertain,” meaning the central bank would have to remain ready to do more if needed.

The bank said it would lower interest rates on its long term loan for banks to as little as minus 1 percent and launch a new loan scheme called Pandemic Emergency Longer-Term Refinancing Operations or PELTROs.

But it did not change its asset purchase programs, including its new Pandemic Emergency Purchase Programme, also known as PEPP.

“The Governing Council is fully prepared to increase the size of the PEPP and adjust its composition, by as much as necessary and for as long as needed,” the ECB said.

“In any case, it stands ready to adjust all of its instruments, as appropriate, to ensure that inflation moves towards its aim in a sustained manner, in line with its commitment to symmetry.”

With much of Europe locked down indefinitely to contain the coronavirus pandemic, Lagarde said ECB staff saw the 19-country currency bloc’s economy shrinking by between 5 per cent and 12 per cent this year. Governments are borrowing record amounts to keep firms afloat until restrictions are lifted. The ECB is unlikely to stay on the sidelines for long as it is on track to exhaust its current bond purchase quota by autumn and jittery financial markets are demanding a further show of commitment.

But having acted early, the ECB can afford to wait now and keep some pressure on Europe’s political leaders, who have so far fumbled a fiscal response, leaving the ECB in a familiar role as the currency union’s chief crisis fighter.

By the ECB’s next regular meeting on June 4, the outlines of a broadly agreed deal on a 1 trillion euro reconstruction fund should also be clearer, making it easier for the central bank to do its part.

Markets showed a degree of disappointment at the lack of immediate action. Euro zone bank stocks fell over 6 per cent, Italian bonds began to sell off again and the euro dipped 0.2 per cent in the currency markets.

Weak data suggest the ECB cannot avoid doing more: figures earlier on Thursday showed the euro zone economy shrank by 3.8 per cent in the first quarter, underperforming expectations for a 3.5 per cent drop, even before the biggest impact of the lockdown was felt.

Inflation, meanwhile, slowed to just 0.4 per cent, far from the ECB’s target of almost 2 per cent, and a drop into negative territory is likely in the coming months after oil prices crashed.

Christine Lagarde’s news conference was keenly watched by investors who wanted to hear whether the ECB discussed bigger asset buys or purchases of bonds that lose their investment-grade ratings in the crisis.

Downgraded by Fitch this week, Italian debt is nearing junk territory, raising the prospect that the bloc’s third-largest economy could lose access to ECB help just as it needs it most.

But letting go of Italy would be politically unacceptable and the ECB has already started to prepare the ground, first by temporarily buying Greek debt and then by accepting bonds recently downgraded to junk as collateral from banks.

Lagarde told an online-only news conference with journalists that policymakers had not discussed adding junk bonds to its regular asset purchases, but stressed the flexibility of the ECB’s tools and its willingness to deploy them, “full-fledged.”

“We will not tolerate any risk of fragmentation,” she said.

“We will want to make sure credit flows to the economy, that our monetary policy stance and transmission are effective, and we will do so in whichever country needs to benefit from our determinations.”

With Thursday’s decision, the ECB’s benchmark deposit rate remains at minus 0.5 per cent and its main refinancing rate at 0 per cent. 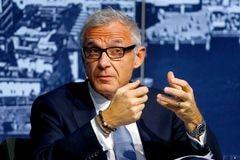 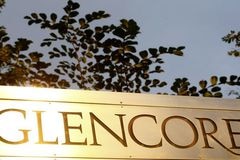 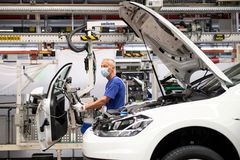