European Central Bank president Mario Draghi told his successor on Thursday to “never give up” on propping up the euro zone economy in the face of a worsening outlook and little help from governments.

At the last news conference of his eight-year tenure, the man credited with saving the euro from collapsing kept the door open to even more easy money, days before he hands the reins over to Christine Lagarde on Oct. 31.

With inflation languishing at less than half the ECB’s target and an unprecedented revolt against his brand of monetary stimulus, it was hardly a grand finale for Mr. Draghi, whose 2012 pledge to do “whatever it takes” to save the euro quashed speculation against the bloc’s most heavily indebted countries.

Mr. Draghi refused to give specific advice to Ms. Lagarde, but said his legacy was defined by a single-minded quest to boost price growth in an ailing and divided currency bloc.

“This is part of our legacy: Never give up!” Mr. Draghi said.

Under him, the ECB abandoned its roots in German monetary orthodoxy, pushing the interest on bank deposits well below zero and buying €2.6-trillion (about $3.8-trillion) worth of assets, mostly government bonds.

Mr. Draghi has credited this policy with averting deflation in the euro zone and helping to create 11 million jobs in the bloc.

But more than a third of the ECB’s Governing Council opposed a decision to resume bond purchases at the September meeting, and policy makers from the Netherlands, France and Germany took the unusual step of making their disagreement public.

And it’s not just a few prominent hawks who question the wisdom of even more bond buys.

Some 95 per cent of respondents in a Reuters poll of analysts said the stimulus package would not significantly help in bringing inflation back to the ECB’s target of just less than 2 per cent.

The ECB made no new policy moves on Thursday, having decided in September to restart bond purchases at a pace of €20-billion a month while also cutting its deposit rate to -0.5 per cent and keeping the door open to further reductions.

Despite weak growth across the euro zone, Mr. Draghi insisted the benefits of loose money policy far outweighed the risks and rejected the suggestion that the public spat had tainted his legacy.

“Every jurisdiction has disagreements when monetary policy decisions come to be discussed,” Mr. Draghi said.

He added dissenters seemed to bury the hatchet at Thursday’s meeting, with one calling for unity and another saying that “bygones are bygones.”

A source at the meeting said the climate was more consensual than in September, with dissenters refraining from bringing up their concerns again when the policy proposal was made.

Yet turmoil within the ECB was likely to persist, and Ms. Lagarde will have to deal with objections that the ultraeasy policy hurts savers, squeezes banks and pension funds and inflates financial bubbles while doing little for inflation.

This was just 0.8 per cent in September, a far cry from the ECB’s target of less than but close to 2 per cent.

This goal may change under Ms. Lagarde, who has pledged to review the ECB’s strategy, following in the footsteps of the U.S. Federal Reserve.

“She may wait until a review of the ECB’s monetary policy has been conducted in order to decide if Draghi’s motto remains valid,” said Rene Albrecht, an analyst at DZ Bank.

The problem for the ECB is that some of the major factors depressing prices are outside its control.

These range from demographic and technological changes to the euro zone’s reliance on exports, in particular by German manufacturers, which leaves it bearing the brunt of a global trade war.

With the ECB’s firepower now largely spent, Mr. Draghi and his successor are likely to continue urging governments that are running surpluses, such as Germany and the Netherlands, to invest more to generate economic growth at home.

But the latest budget figures showing only a modest expansion suggest these calls are likely to go unheard for now, leaving the burden on the ECB.

“Monetary policy will continue to do its job,” Mr. Draghi said. 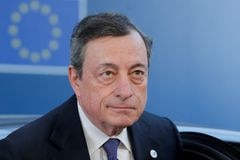