London Stock Exchange Group PLC’s US$27-billion purchase of financial-data business Refinitiv has its origins in May, 2013, amid the crocuses, Champagne and corporate hobnobbing of the British capital’s Chelsea Flower Show.

The meeting would set in motion a sequence of events involving Blackstone, Refinitiv and LSE that led to a deal that was announced on Thursday.

Mr. Craig and Mr. Canonaco, who now runs advisory firm Canson Capital Partners, pitched Mr. Baratta with an idea: The F&R unit would be better off split from Thomson Reuters, where the duo felt it was not getting enough investment, three sources with direct knowledge of the matter said.

In order to do that, they would have to overcome several hurdles, starting with the need to find an investor with deep pockets willing to back the idea, the sources said. As one of the top executives at the world’s largest private equity firm, Mr. Baratta could play that role, according to the sources.

Mr. Baratta was intrigued and wanted to hear more, the sources said.

Mr. Craig felt the division, which sells data and analytics to traders, investors and other financial customers, could be a good fit with an exchange operator, especially LSE, but he did not share that with Mr. Baratta at the flower show, one of the sources said.

However, by the time Blackstone inked its deal with Thomson Reuters, some of Blackstone’s dealmakers had reached the same conclusion.

Blackstone, LSE and Thomson Reuters declined to comment. Refinitiv and Mr. Craig did not respond to requests for comment.

Refinitiv’s merger with LSE will come just 10 months after Blackstone bought a majority stake in the unit from Thomson Reuters, in a deal that closed last October. LSE hopes Refinitiv will help it transform into a major global market data and infrastructure player.

It is a quick sale for a private equity firm, which typically holds on to assets for three to five years. Blackstone and its co-investors will immediately double on paper their roughly US$4-billion investment in Refinitiv, two sources close to Blackstone said.

The private equity firm will be paid with LSE shares and will have to remain fully invested for at least the first two years as part of a lockup arrangement that will come to an end on the fourth anniversary of completion.

Blackstone and other minority investors, including Canada Pension Plan Investment Board and Singapore state fund GIC, will control 22 per cent of the combined firm and get two board seats, while Thomson Reuters will have a 15-per-cent stake and one board seat.

Mr. Craig and Mr. Baratta followed up the meeting at the flower show with several others during 2013, and were joined by Thomson Reuters executives and bankers.

Although Mr. Baratta had been intrigued, Blackstone initially thought a purchase of F&R would be too big of a bet for the firm at the time and the talks went quiet in 2014-2015, according to three sources with direct knowledge of the matter.

Mr. Craig also separately spoke over the years with LSE, then led by Xavier Rolet, about the possibility of a deal for F&R, but the exchange executive was not confident that his board would back it, one source with knowledge of the matter said. Another source familiar with the situation said Mr. Rolet saw more value in deals that added to the exchange operator’s trading assets. Mr. Rolet declined to comment.

A buyout of the F&R business had some unique challenges.

At Thomson Reuters, an independent board of directors, called Founders Share Company trustees, had oversight over the Reuters news agency and could veto deals viewed as threatening its independence and freedom from bias. Reuters provides news on F&R products, including Eikon terminals, its largest customer.

Further, some members of the Thomson Reuters board, including chairman David Thomson, did not initially want to sell the F&R division because they worried a deal could undervalue the business, according to two sources.

By the summer of 2016, three sources close to Blackstone said the private equity firm had come up with a structure for a deal for F&R. Senior managing director Martin Brand reached out to Mr. Canonaco in May, 2016, to resume the talks and took the lead on the deal, two sources said.

Dubbed Project York by bankers, the deal envisioned Blackstone buying a 55-per-cent stake in the business, according to two sources close to Blackstone.

Before signing the deal in early 2018, Blackstone dealmakers told their firm’s investment committee that a sale of the division to an exchange operator could be one possible exit strategy, two of the sources said.

Reuters was left behind with Thomson Reuters. Under the deal inked with Blackstone, the news agency continued to operate independently under the Trust Principles and was guaranteed annual payments of US$325-million for 30 years, plus an annual inflation increase. The LSE will inherit this arrangement.

When LSE said in April, 2018, that David Schwimmer, a long-time Goldman Sachs Group Inc. banker, would take over as CEO that August, the stars aligned for a deal between Refinitiv and the exchange operator.

Blackstone’s Mr. Brand had grown close to Mr. Schwimmer, who had done deals for the private equity firm. Last year, he helped sell capital markets data provider Ipreo, owned by Blackstone and Goldman, to IHS Markit Ltd. for US$1.9-billion, according to four sources with direct knowledge of the matter.

Mr. Brand did not wait for the Refinitiv deal to close to plant the idea of a merger with LSE in Mr. Schwimmer’s mind last year. The future of the financial services industry, Mr. Brand’s pitch to Mr. Schwimmer went, was in marrying trading and data offerings. LSE should lead the way, he told Mr. Schwimmer, according to one of the sources close to Blackstone.

Initially, Mr. Schwimmer was reluctant to do a big deal early in his tenure as CEO, three of the sources said. But in April of this year, Mr. Schwimmer learned that Blackstone was in advanced talks with Deutsche Boerse AG to sell a foreign exchange trading business of Refinitiv for more than US$3-billion, four sources said.

Emboldened by an 18-per-cent run-up in LSE’s stock in the first quarter and having persuaded a new chairman at LSE to back a deal, Mr. Schwimmer felt he had to move before Deutsche Boerse bought the forex trading unit, one of the sources said.

Representatives for LSE and Mr. Schwimmer declined to comment.

Blackstone slowed down talks with Deutsche Boerse to give LSE time to put together an offer, according to two sources close to Blackstone. Bankers nicknamed the deal Project Africa, referring to Refinitiv as rhino, LSE as leopard and Thomson Reuters as tiger, they said.

By May, they had a handshake agreement, according to four sources.

Mr. Craig, who will remain at the helm of Refinitiv within LSE and sit on its executive committee, is expected to get some shares in the company, one of the sources said. 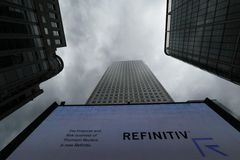