The rout of the ruble triggered by the most punitive U.S. penalties yet deepened after President Donald Trump warned Russia to “get ready” for American missiles in Syria, where Vladimir Putin is committed to defending government forces.

The pledged strikes over an alleged chemical attack in Syria and the latest round of U.S. sanctions rattled markets in Moscow, sending Russia’s currency to a 16-month low and yields on local debt to the highest level of the year.

“Russia vows to shoot down any and all missiles fired at Syria,” Trump said in a tweet Wednesday. “Get ready Russia, because they will be coming, nice and new and ‘smart!’ You shouldn’t be partners with a Gas Killing Animal who kills his people and enjoys it!”

The penalties Treasury imposed Friday hit billionaire Oleg Deripaska’s metals giant United Co. Rusal the hardest, driving one of the country’s largest employers out of the dollar economy and Russian aluminum out of key exchanges. That left investors guessing who or what may be targeted next and Russia girding for “economic war” even before Trump’s threat.

The volatility prompted the central bank to halt foreign-currency purchases under a budget rule aimed at insulating the economy from swings in oil, Russia’s main export. The Finance Ministry canceled its weekly bond auction for the first time since the 2015 collapse in crude prices. Auctions will resume when the market stabilizes, the ministry said in a statement late Tuesday.

Fueling to the uncertainty is a bill proposed in Congress last week that would ban the purchase of Russian government debt, even though Treasury has recommended not pursuing the so-called nuclear option because it would be too damaging to U.S. investors. Foreigners held about 34 percent of Russia’s sovereign ruble bonds before the sell-off, a record share.

“Concerns about Syria are lifting Russia’s risk premium, which was already elevated because of the new sanctions,” said Ekaterina Iliouchenko, a money manager at Union Investment Privatfonds GmbH in Frankfurt. “All the negative factors coincided.”

The ruble slumped 2.7 percent to 64.705 per dollar at 2:08 p.m. in Moscow. The yield on 10-year ruble bonds was up 8 basis points at 7.67 percent. The cost of insuring Russian dollar debt against default jumped 7 basis points to 156, the highest since August.

Russian stocks have been the lone bright spot since the Moex Russia Index’s 8.4 percent plunge on Monday. The measure climbed 0.8 percent on Wednesday, paring an earlier jump of as much as 2.7 percent, as the weaker ruble boosted the profit outlook for exporters.

Still, the possibility of the U.S. inflicting more financial pain over what Treasury refers to as Putin’s “malign activity” around the world will continue to breed uncertainty, according to Prague-based Wood & Co.

“Investors should approach the Russian market with much more caution and be prepared for a lot of volatility in the next few days and weeks,” Wood analysts led by Ildar Davletshin said in a note.

Adding to investor concerns is the unpredictability of the White House in Washington. Trump is intensifying preparations for a U.S. response to the alleged use of chemical weapons in Syria, where Russian and Iranian forces are fighting insurgents on behalf of President Bashar Al-Assad. Trump earlier suggested that Putin may share responsibility with Assad for an attack Russia says never happened.

The latest sanctions are notably worse than earlier ones over Ukraine because they specifically bar any trading of securities of targeted companies rather than just blocking access to new international funding. The iShares JP Morgan EM Local Government Bond ETF, of which Russia is a major component, suffered its biggest outflow since October on Tuesday.

“All Russian companies could potentially be at risk, and the impact could be quite substantial,” said Stephane Monier, chief investment officer at Bank Lombard Odier & Co Ltd. in Geneva. 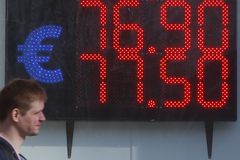 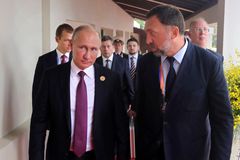