South Korean electronics giant Samsung will make France its third global research and development hub in artificial intelligence after Korea and the United States and hire about one hundred experts in Paris, the French president’s office said on Wednesday.

The announcement, made after a meeting between Emmanuel Macron and Samsung’s strategy chief Young Sohn in Paris, comes as the French president prepares to unveil a major plan to boost the country’s capacities in AI on Thursday.

Samsung Electronics will build up its current team of 15 people in the Paris area to 50 scientists by the end of the year, before reaching more than 100 experts eventually, two presidential advisors said.

Samsung France did not immediately return a request for comment.

Japan’s Fujitsu will also make France its No. 1 European research centre for AI, strengthening a team of 15 people currently hosted at the country’s elite engineering school Polytechnique near Paris.

“The group, after a review that lasted more than a year, found that France stood out from the crowd in the field of artificial intelligence,” said Benjamin Revcolevschi, managing director at Fujitsu France. 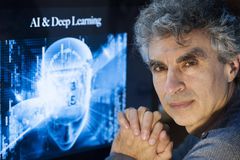