With her arms full of US$11.87 worth of bananas, red peppers and onions, an elderly woman at a produce stand in western Caracas approaches vendor Walquiria Garcia and offers to pay with a US$10 or US$20 bill.

A flustered Ms. Garcia disappears into a closet, re-emerges, takes the $10 note and scribbles, “owes $1.87” on the back of an old crumpled receipt that the customer is to bring on her next shopping trip.

Since a sudden liberalization of Venezuela’s economy at the end of 2018, routine purchases increasingly have been made in U.S. dollars rather than the South American country’s virtually worthless bolivar currency.

But a chronic shortage of denominations of less than US$20 has forced businesses to come up with improvised workarounds ranging from makeshift vouchers and customer IOUs to offers of additional products in place of change.

Within several hours of opening for business, Ms. Garcia’s produce stand had run out of small bills. When the next customer arrived with a US$20 bill, the vendor laughed nervously.

“With each client it is different and you have to decide in the moment with the customer how to resolve the situation,” Ms. Garcia said. “I try to save the small bills for change, but there are just not enough $1 or $5 dollar bills.”

Venezuelan President Nicolas Maduro, who for years forbade the use of dollars in local transactions, relaxed currency controls after a decline in oil revenue and an intensification of U.S. sanctions on Venezuela.

The socialist President now embraces the use of dollars, calling it an “escape valve, a form of resistance,” that can help the country weather a deep-rooted economic crisis.

But the mechanics of the informal and spontaneous transition has left Venezuelans scrambling.

Around US$2-billion of cash in circulation is mostly in denominations of US$20, US$50 and US$100 bills, according to local consultancy Ecoanalitica, as the U.S. sanctions give the government little access to the international financial system.

Dollar use has accelerated amid inflation, which the opposition-run congress estimates at more than 4,000 per cent a year.

Many people still get paid in the local bolivar currency, but with the monthly minimum wage equivalent to around US$1 a month, most salaried workers take up side jobs that are often paid in greenbacks, such as baking cakes or fixing cars.

The business of buying and selling dollars has also flourished, and low-denomination bills are worth more.

Maria Briceno, a cigarette street vendor in Maracaibo, the second-largest city in Venezuela, sells any US$1 and US$5 dollar bills she earns to other businesses.

In Caracas, the country’s capital, one ceramics store has taken to passing out mosaics with a number equivalent to the change owed as a credit for subsequent purchases.

“Most people come prepared with [mobile payment platform] Zelle, because there is really little change in U.S. dollars,” said the ceramics store owner, who spoke on condition of anonymity. “It is a challenge, but it is better if they pay in dollars and not in bolivars, which lose value.”

While many customers use apps such as Zelle, those services often require a bank account in the United States, forcing people to turn to friends, relatives or others willing to loan their accounts.

Vendors sometimes lose customers if there is no change, while others allow most of a purchase to be paid in dollars, with the remainder in bolivars.

“I try to save my dollars,” said Isabela, a woman in Caracas who declined to give her last name. “Because the worst is when I cannot buy gasoline after waiting for hours because they only accept dollars in cash, and there is no change.” 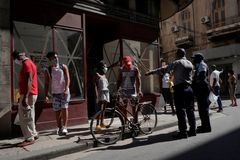 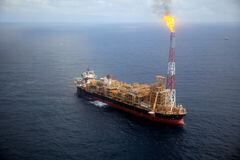 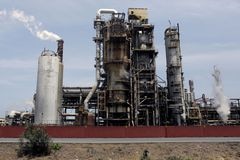