The White House overhauled some of its international travel restrictions Monday, but left in place a controversial ban on travel across the Canada-U.S. land border even as it announced that by early November, it would allow overseas air visitors who are fully vaccinated against COVID-19.

It was the first clear indication in months that U.S. President Joe Biden’s administration is getting ready to ease and streamline the patchwork of travel restrictions that were first imposed at the outset of the pandemic in March 2020, when Donald Trump was still president.

But the ongoing prohibition on recreational travellers driving from Canada and Mexico – extended now for a 19th month until Oct. 21 – came to some as nothing short of a slap in the face.

“Canadians should be pissed off, and for good reason,” said Rep. Brian Higgins, a New York congressman who has been fighting for months to convince the White House to ease the restrictions.

Maintaining the travel ban at the land border undermines the very same public faith in the COVID-19 vaccines that the Biden administration is working so hard to convince Americans to embrace, he added.

The new rules replace Trump-era travel bans that restricted visits to the U.S. by those who had recently been in the United Kingdom, the European Union, China, India, Iran, Ireland, Brazil and South Africa. Passengers will have to show proof of vaccination before boarding, as well as a negative COVID-19 test taken no more than three days prior to departure.

In that respect, they are similar to the requirements Canada began imposing over the summer – initially on returning Canadians, then on U.S. citizens and permanent residents, then finally earlier this month on all foreign nationals.

Air travel to the U.S. from Canada has never been restricted, and it’s not yet clear whether the new vaccination rules will be imposed on Canadian passengers when they take effect. The rules at the Canada-U.S. border have also allowed trade and essential workers to move between the two countries unfettered.

The other burning question is whether Canadians who received the Oxford-AstraZeneca vaccine, which has never been approved for use in the U.S., will meet the eligibility test. Federal officials say they are pressing the Biden administration to ensure those people will be allowed in.

About 3.9 million people in Canada have received a mixed-dose regimen of COVID-19 vaccines, with an estimated 1.4 million of them having received an AstraZeneca dose, Public Health Agency of Canada data indicates. More than 223,000 people are fully vaccinated with AstraZeneca.

“This is all a part of the process,” White House press secretary Jen Psaki said Monday when asked about specific vaccine requirements, as well as whether and when the land border restrictions would be amended or eased.

“We don’t have any updates or predictions at this point in time, but obviously we are continuing to consider – as is evident by our announcement today – how we can return to a place of travel and people being able to move from country to country, including at our land borders.”

More stringent testing and quarantine requirements will also be put in place for unvaccinated travellers when the new rules take effect in November.

The U.S. is clearly more willing to allow people into the country via air than by land – evidence of the importance they place on the ability of airlines to handle the cumbersome chore of screening travellers and ensuring they meet the necessary health requirements.

“It’s incredibly frustrating, it confounds logic, and something’s got to give,” said Scotty Greenwood, president and CEO of the D.C.-based Canadian American Business Council.

“We believe that fully vaccinated Canadians should be allowed to safely travel into the United States via land ports of entry,” reads the letter, which was also signed by New Hampshire Sen. Maggie Hassan, and Minnesota Sen. Amy Klobuchar and Sen. Angus King, the Independent from Maine.

“We urge you to lift these restrictions before October, provide a plan for reopening land ports of entry and appoint an interagency lead on U.S.-Canadian border restrictions related to the COVID-19 pandemic.”

“We had hoped that by now, we would have opened up travel through the ports of entry, but regrettably, because of the Delta variant, we’ve been delayed in doing so,” Mayorkas said.

The restrictions now include language that make it possible to relax or lift the ban entirely before the start of the next 30-day window, he added.

“Because we’ve renewed it for 30 days does not necessarily mean that the restriction will last for another 30 days.”

There’s also the U.S.-Mexico border, where an escalating immigration crisis is complicating matters. Mayorkas himself travelled Monday to the south Texas region where upwards of 14,000 migrants from Haiti have been gathering, with more arriving daily, in hopes of winning asylum in the U.S.

“We’re only left to speculate about what other unrelated issues may be at work here – is it the southern border? Quite possibly,” Higgins said. 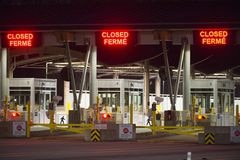 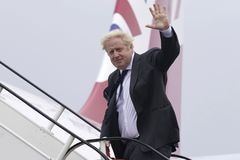 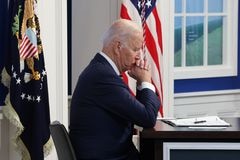