Strains in the U.S. housing sector emerged in the aisles of Home Depot, a store with a reputation for consistently delivering surprises to the upside for its investors.

In the final quarter of the year, Home Depot fell short on profit, revenue and same-stores sales as rising real estate prices cast a chill over U.S. home sales.

Shares fell 3.3 per cent Tuesday before the opening bell.

The company projected that comparable-store sales growth, a key gauge of health in the retail industry, would not be as strong this year as it was in 2018.

The National Association of Realtors said last week that sales of existing homes dropped 1.2 per cent in January to their worst pace in more than three years. During the past 12 months, sales have tumbled 8.5 per cent. And on Tuesday, the Commerce Department announced that the number of homes being built in December fell 11.2 per cent. That’s the lowest level in more than two years.

Would-be homebuyers are increasingly priced out of the market as years of climbing prices and slim housing inventories put ownership out of reach for many Americans.

Those declines can ripple out to companies that sell materials such as Home Depot and its rival, Lowe’s, which slid in tandem with Home Depot in early trading.

The latest numbers also show contracts to buy homes dipped to the lowest level since early 2014, and those declines were seen in every region of the country – including a 13.5 per cent plunge in the South, which is generally the United States’ fastest-growing region for housing.

“A material slowdown in the housing market – where both sales and prices have been under pressure for some time – has stymied demand for home improvement products,” wrote Neil Saunders, managing director of GlobalData Retail. “In our view, this has likely affected the momentum of growth at Home Depot.”

A year ago the Atlanta home improvement retailer earned US$1.78-billion, or US$1.52 a share.

The current quarter was also nicked by a one-time charge or 16 cents a share.

Revenue climbed to US$26.49-billion, from US$23.88-billion, with the extra week adding approximately US$1.7-billion in sales. But that too, was short of forecasts.

Sales at stores open at least a year rose 3.2 per cent, also missing Wall Street projections of a 4.5 per cent bump. In the U.S., same-store sales increased 3.7 per cent.

Comparable-store sales are a key indicator of a retailer’s health because it excludes volatility from stores that were recently opened or closed.

Its profit guidance for 2019 issued Tuesday was for US$10.03 a share, which is also below Wall Street projections for US$10.26.

There was some optimism from Home Depot Inc. about the year ahead.

The company announced Tuesday that it is raising its quarterly dividend 32 per cent to US$1.36 a share. It also forecast strong sales growth of about 3.3 per cent and announced a US$15-billion stock buyback program.

Home Depot, under chief executive and chairman Craig Menear, has been steady in delivering outsized profits and revenue quarter after quarter and he voiced optimism about the current year.

“Our view on the health of the economy and the consumer, as well as the momentum of our strategic investments, supports our belief that we can deliver comparable sales growth of 5.0 per cent in fiscal 2019,” Mr. Menear said in a prepared statement.

Despite the early sell-off in shares, industry analysts such as Mr. Saunders were still impressed with the way Home Depot has operated in a worsening housing environment.

“Home Depot’s comparable sales increases actually look even more respectable – in essence, they show the company is able to pull other levers to secure growth, even as economic fundamentals weaken,” Mr. Saunders said.

Shares of Lowe’s Companies Inc., which reports earnings on Wednesday, slid 3 per cent.

Lowe’s to buy back $10-billion in shares, reiterates its growth forecast for 2018
Subscriber content
December 12, 2018 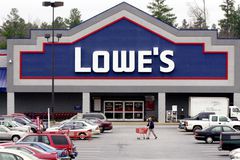