U.S. employers increased hiring in May and raised wages as they competed for workers, with millions of unemployed Americans still at home because of child care issues, generous unemployment checks and lingering fears over COVID-19.

Though the pickup in job growth shown in the Labor Department’s closely watched employment report on Friday missed economists’ forecasts, it offered some assurance that the recovery from the pandemic recession remained on track.

Growth is being supported by vaccinations against COVID-19, massive fiscal stimulus and the Federal Reserve’s ultra-easy monetary policy stance. April’s nonfarm payrolls count, which delivered about a quarter of the new jobs economists had forecast, caused hand-wringing among some analysts and investors that growth was stagnating at a time when inflation was rising.

“There are still a lot of people unemployed, but there does not seem to be a lot of eagerness to work,” said Chris Low, chief economist at FHN Financial in New York. “There would have been many more hires if employers could find more people.”

Nonfarm payrolls increased by 559,000 jobs last month. Data for April was revised higher to show payrolls rising by 278,000 jobs instead of 266,000 as previously reported.

That left employment about 7.6 million jobs below its peak in February 2020. Economists polled by Reuters had forecast 650,000 jobs created in May. About 9.3 million people were classified as officially unemployed last month. There are a record 8.1 million unfilled jobs.

At least half of the American population has been fully vaccinated against the virus, according to data from the U.S. Centers for Disease Control and Prevention.

That has allowed authorities across the country to lift virus-related restrictions on businesses, which nearly paralyzed the economy early in the pandemic. But the reopening of the economy is straining the supply chain.

Millions of workers, mostly women, remain at home as most school districts have not moved to full-time in-person learning. Despite vaccines being widely accessible, some segments of the population are reluctant to get inoculated, which labour market experts say is discouraging some people from returning to work.

Government-funded benefits, including a $300 weekly unemployment subsidy, are also constraining hiring. Republican governors in 25 states are terminating this benefit and other unemployment programs funded by the federal government starting next Saturday.

These states account for more than 40 per cent of the work force. The expanded benefits end in early September across the country. That, together with more people vaccinated and schools fully reopening in the fall, is expected to ease the worker crunch.

Labor Secretary Marty Walsh said the argument that enhanced benefits were discouraging job-seeking was not supported by what workers were telling him.

“Working people across America are eager to work,” said Walsh in a statement. “But workers also told me about the challenges they and their families face, finding affordable child care, caring for elderly parents and grandparents”

Stocks on Wall Street were trading higher. The dollar fell against a basket of currencies. U.S. Treasury prices rose.

Average hourly earnings rose a solid 0.5 per cent after shooting up 0.7 per cent in April. That raised the year-on-year increase in wages to 2.0 per cent from 0.4 per cent in April. Wages in the leisure and hospitality sector jumped 1.3 per cent, the third straight month of gains above 1 per cent.

Postings on Poachedjobs.com, a national job board for the restaurant/hospitality industry, are showing restaurants offering as much as $30-$35 per hour for lead line cooks.

Sustained wage growth could strengthen the argument among some economists that higher inflation could last longer rather than being transitory as currently envisioned by Fed Chair Jerome Powell. A measure of underlying inflation tracked by the Fed for its 2 per cent target accelerated 3.1 per cent on a year-on-year basis in April, the largest increase since July 1992.

Still, most economists do not expect the U.S. central bank to start withdrawing its massive economic support any time soon.

“The data will likely reinforce the view of most Fed officials that progress has not been ‘substantial’ enough for them to start signalling tapering,” said Jim O’Sullivan, chief U.S. macro strategist at TD Securities in New York.

The average workweek held steady at 34.9 hours. That together with strong wage gains lifted an income proxy 0.9 per cent, matching April’s gain. This bodes well for consumer spending, which could also get a powerful tailwind from the more than $2.3-trillion in excess savings amassed during the pandemic.

Economists are sticking to their forecasts for double-digit growth this quarter.

Last month’s increase in hiring was led by the leisure and hospitality industry, which added 292,000 jobs, with restaurants and bars accounting for 186,000 of those positions. Local government education employment rose by 53,000 jobs as the resumption of in-person learning and other school-related activities in some parts of the country continued.

The unemployment rate fell to 5.8 per cent from 6.1 per cent in April. The drop was in part due to more jobs created and 53,000 people dropping out of the labour force. The jobless rate has been understated by people misclassifying themselves as being “employed but absent from work.” Without this problem, the unemployment rate would have been 6.1 per cent.

The labour force participation rate, or the proportion of working-age Americans who have a job or are looking for one, fell to 61.6 per cent from 61.7 per cent in April.

“It appears like employers may need to offer up more incentives to entice workers to fill the record number of job openings that are out there,” said Charlie Ripley, senior investment strategist at Allianz Investment Management. 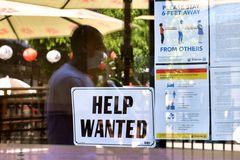 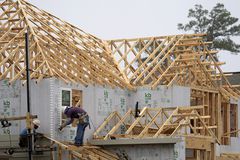 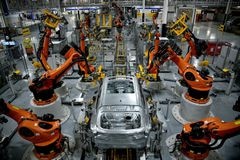