U.S. personal income fell for the first time in more than three years in January and consumer spending dropped by the most since 2009 in December, putting the economy on a weak growth path early in the first quarter.

The economic outlook was also darkened by other data on Friday showing factory activity hit a more than two-year low in February, with manufacturers reporting slowing new orders and hiring. The reports extended the run of soft data on an economy that lost momentum at the tail end of 2018 and gave more credence to the Federal Reserve’s “patient” stance toward raising interest rates further this year.

The economy is losing speed as the stimulus from a $1.5-trillion tax cut package and increased government spending fades. A trade war between the United States and China, higher interest rates, softening global growth and uncertainty over Britain’s exit from the European Union are clouding the outlook.

“A modest slowdown remains the most likely path for 2019,” said Eric Winograd, senior U.S. economist at AllianceBernstein in New York. “We shouldn’t expect any action from the Fed into at least the second half of the year.”

The Commerce Department said personal income slipped 0.1 per cent in January, the first decline since November 2015, after jumping 1.0 per cent in December. Income was weighed down by decreases in dividend, farm proprietors’ and interest income.

Income was boosted in December by a one-time special dividend by information technology firm VMware Inc as well as government payments to farmers caught up in the U.S.-China trade war.

The Commerce Department did not publish the January consumer spending portion of the report as the collection and processing of retail sales data was delayed by a 35-day partial shutdown of the government that ended on Jan. 25.

It reported that consumer spending, which accounts for more than two-thirds of U.S. economic activity, dropped 0.5 per cent in December. That was the biggest decline since September 2009 and followed a 0.6 per cent increase in November.

When adjusted for inflation, consumer spending fell 0.6 per cent in December, also the largest drop since September 2009, after rising 0.5 per cent in November.

The December data was included in the fourth-quarter gross domestic product report published on Thursday, which showed consumer spending growing at a 2.8 per cent annualized rate during that period, slower than the third quarter’s robust 3.5 per cent pace.

The economy grew at a 2.6 per cent rate in the October-December quarter after notching a 3.4 per cent pace in the third quarter.

The dollar was little changed against a basket of currencies. Stocks on Wall Street were trading higher, while U.S. Treasury prices fell.

The sharp deceleration in consumer spending in December puts consumption on a lower growth trajectory in the first quarter and bolsters analysts’ expectations that the economy will slow down further in the first three months of the year.

“Unless there is a big upward revision to the disastrous December retail sales figure, the weak end-of-quarter consumption profile provides for very challenging arithmetic for first-quarter consumption growth,” said Michael Feroli, an economist at JPMorgan in New York.

Still, consumer spending likely remains supported by a strong accumulation of savings, which surged to a six-year high of $1.2-trillion in December from $961.3-billion in November. The saving rate jumped to a three-year high of 7.6 per cent. In addition, consumer sentiment remains high.

That left the year-on-year increase in the so-called core PCE price index at 1.9 per cent. The core PCE index is the Fed’s preferred inflation measure.

It hit the U.S. central bank’s 2 per cent inflation target in March for the first time since April 2012.

Inflation is likely to remain benign despite a tight labour market as supply constraints at factories ease. A third report on Friday showed the Institute for Supply Management’s (ISM) national factory activity index fell 2.4 points to 54.2 last month, the lowest reading since November 2016.

A reading above 50 in the ISM index indicates an expansion in manufacturing, which accounts for about 12 per cent of the U.S. economy. Raw material prices fell for a second straight month in February after nearly three years of increases.

Plastics and rubber products manufacturers said “general business conditions started to slow at the end of January, continuing through February.”

“This supports our move to lower our first-quarter GDP forecast,” said Jennifer Lee, a senior economist at BMO Capital Markets in Toronto. “We need to see a turnaround in coming months.” 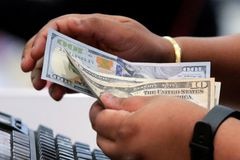 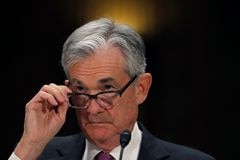